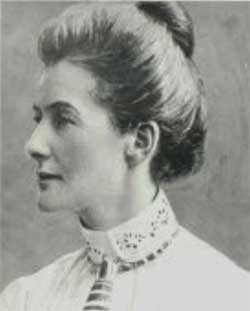 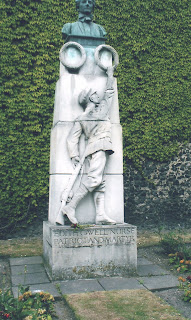 Edith Cavell Memorial - Norwich
(Taken 5/6/2007)
Edith Louisa Cavell was born into a British clergy family at Swardeston. After a time as a governess, she became a nurse, working with the Red Cross in Belgium in 1907. In World War I she cared for the wounded on both sides. Refusing repatriation, she began smuggling British soldiers from Belgium into Holland, eventually helping some 200 Allied soldiers to escape from the Germans. Her religious beliefs, rooted in Anglicanism, compelled her to help all those who were in need, both German and Allied soldiers. She was arrested and faced trial by the Nazis in 1915.
Nurse Cavell became well-known for her comment to The Reverend Stirling Gahan, the Anglican chaplain who had been allowed to see her and to give her Holy Communion the night before her execution: "Patriotism is not enough, I must have no hatred or bitterness towards anyone." Her final words to the German Lutheran prison chaplain, Paul Le Seur, were recorded as, "Ask Father Gahan to tell my loved ones later on that my soul, as I believe, is safe, and that I am glad to die for my country." According to Rev. Le Seur, eight men carried out her sentence at Tir National shooting range in Schaerbeek, at 6:00 AM on October 12, 1915.
The night before she died, Edith wrote this to her nurses:
"My Dear Nurses,
To my sorrow I have not always been able to talk to you each privately. You know that I had my share of burdens. But I hope that you will not forget our evening chats.
I told you that devotion would bring you true happiness and the thought that, before God and in your own eyes, you have done your duty well and with a good heart, will sustain you in trouble and face to face with death...
One more word. Never speak evil...Nurses all need to think of this, and to cultivate a loyalty and team spirit among themselves...
If any of you has a grievance against me, I beg you to forgive me; I have perhaps been unjust sometimes, but I have loved you much more than you think.
I send my good wishes for the happiness of all my girls, as much for those who have left the School as for those who are still there. Thank you for the kindness you have always shown me.
Your matron,
Edith Cavell"
Edith Cavell was also an influential pioneer of modern nursing in Belgium. Following her death, many memorials were created around the world to remember her. One of the first was unveiled in October, 1918 by Queen Alexandra on the grounds of Norwich Cathedral, near a home for nurses which also bore her name. On May 19, 1919, her body was interred near the memorial. Others include:
Memorials:
- a stone memorial, including a statue of Cavell, adjacent to Trafalgar Square in London
- a memorial in Peterborough Cathedral
- a marble and stone memorial near The Shrine in Melbourne, Australia
- a dedication on the war memorial on the grounds of Sacred Trinity Church, Salford, Greater Manchester

Other:
- Cavell Gardens, Inverness, Britain
- Mount Edith Cavell, a peak in the Canadian Rockies, named in 1916
- Cavell Corona, a geological feature on Venus
- a bridge in Queenstown, New Zealand
- The Edith Cavell Trust, established by the New South Wales Nurses' Association providing scholarships to nurses in New South Wales
- The Edith Cavell Nursing Scholarship Fund, a philanthropy of the Dallas County Medical Society Alliance Foundation providing scholarships to exceptional nursing students in Dallas, Texas and the surrounding area
- a guest house in Clevedon, Somerset (Cavell House) where she spent some of her childhood
- a variety of rose, first bred in 1917, is named after her
- a YWCA camp in Lexington, Michigan
- Edith became a popular name for French and Belgian girls after her execution. The French chanteuse Édith Piaf, born two months after Cavell was executed, was the best known of these.
- Radio Cavell 1350 AM, broadcasting to the staff and patients on The Royal Oldham Hospital Charity Radio.
Posted by Harry Allagree at 12:29 PM

I have a funny request. I am working on an exhibit project in Jasper National Park, Canada, at Mount Edith Cavell. I need some images of Nurse Cavell - do you know where I can purchase the rights to reproduce the top image in your post, "Your Matron, Edith Cavell"?