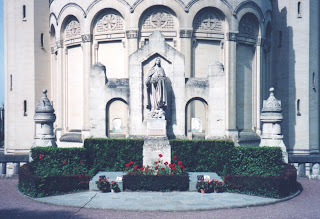 Tombs of Louis & Zelie Martin, parents of St. Thérèse
Plaque in the Basilica noting that
Thérèse was proclaimed a
Doctor of the Church on October 19, 1997
by Pope John Paul II
Le Carmel, Lisieux
Thérèse's monastery 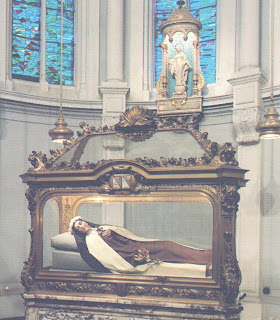 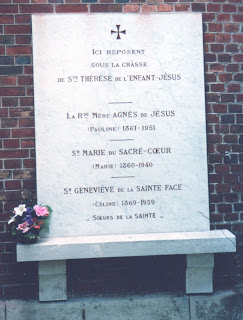 Tomb of Thérèse's three sisters, Lisieux
Entrance to Les Buissonets, Lisieux
From my travel journal for June 20, 1998:
"...Ready to go to Metro early to Gare St. Lazare & then train to Lisieux for the morning...
What a day! Left early & took the train to Lisieux through the green & rolling terrain of Normandy. Went right to the Basilica of Ste. Thérèse -- it's big. A wonderful tour which you can do yourself in the chapels all around the Cathedral -- from Thérèse's birth to her proclamation as Doctor of the Church.
As I began the tour several groups of young people were singing beautifully as the French can do so well. It then became clear that a Mass was beginning -- with a Bishop & several co-celebrants.
The most moving part for me was the shrine of Thérèse which has a relic of her bones & a lovely big picture of her with a constant offering of votive lights.
Outside I visited the tombs of Thérèse's father & mother, Louis & Zelie. Didn't know that they have both been declared 'Venerable'.
Everything in Lisieux is "Ste. Thérèse". I went on, after a stop for souvenirs, to the Carmel where she lived & died. The Mass had just started so I stayed & had Communion. Very nice, the chapel was full, the Mass nicely done with a good homily -- as much as I could catch -- regarding the Sacred Heart & the Immaculate Heart of Mary. Afterwards I visited the shrine which has a replica of her dressed in full habit as she died. Below the altar are her remains & those of her 3 sisters. Very powerful experience. Above the shrine is the actual statue of Mary at which Thérèse was looking when she had her vision of the smiling Virgin...
Hiked quite a way to Les Buissonets [the Martin family home], forgetting that in Europe things close down from lunch time till as late as 5 PM, so I could only see a little of the outside. At least, I was there..."
Posted by Harry Allagree at 10:45 AM