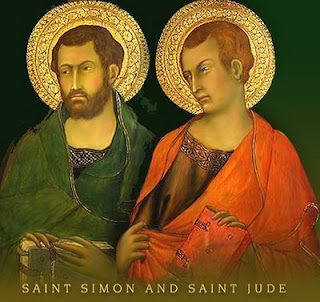 "The two apostles are joined together on 28 October because a church, which had recently acquired their relics, was dedicated to their memory in Rome on this day in the seventh century..." (Celebrating the Saints, ed. Robert Atwell)
Simon is named in the list of Apostles in the three Synoptic Gospels. Mark calls Simon "the Canaanite", while Luke calls him "the Zealot". It's possible he had joined the party of the Zealots, a fourth political party in Jesus' time along with the Pharisees, Sadducees, and the Essenes, at some point, either before or after he became a follower of Jesus,
Jude appears in the list in Luke's Gospel and in Luke's Acts of the Apostles, related to James. Traditionally, he's been identified with "Thaddeus" in the listing of Apostles, and in later times as the "patron of lost or difficult causes". One view is that, because of the similarity of his name with Judas Iscariot, Jude was rarely invoked in prayer by the Church's faithful, so that interceding through him became a "last resort", when all else failed!
What can one say beyond this?!
O God, we thank you for the glorious company of the apostles,
and especially on this day for Simon and Jude; and we pray that,
as they were faithful and zealous in their mission,
so may we with ardent devotion make known the love and mercy
of our Lord and Savior Jesus Christ. Amen.
Posted by Harry Allagree at 10:26 PM