Oxford's "Ruler of the Schools" 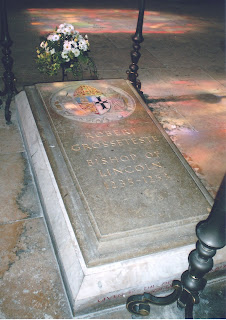 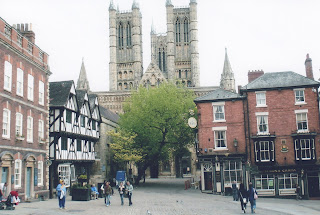 Lincoln Cathedral from the town square 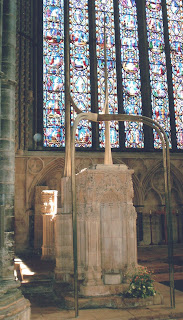 Shrine of St. Hugh of Lincoln at Lincoln Cathedral 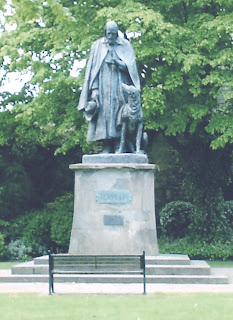 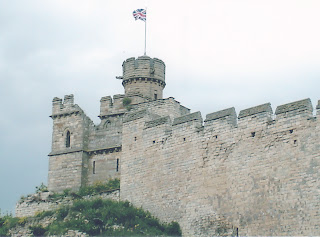 Lincoln Castle - Observatory Tower
Robert Grosseteste ("great head"), c. 1175-1253, was, as Fr. John Julian, OJN notes: "...at once a respected natural scientist, astronomer, mathematician, lawyer, professor, university president, French poet, agriculturist, translator, philosopher, theologian, ecclesiastical reformer, and bishop!" He held the latter post from 1235-1253. Matthew Paris (c. 1200–1259) an English Benedictine monk at St. Alban's Abbey, Hertfordshire, chronicler, artist in illuminated manuscripts, and cartographer, characterizes Grosseteste as "...at the table of bodily refreshment, pleasant and jovial; at the spiritual table, devout, tearful, and penitent; as a bishop, diligent and honorable..." He was certainly loved by the English people, though he was never officially canonized a saint. Bishop Mandell Creighton (1843-1901), an English historian and bishop of London, has called Grosseteste "really the last of the great English churchmen..."
If there were any doubt about that last statement, one would only have to refer to the Memorial which Robert Grosseteste addressed and delivered to Pope Innocent IV before the Papal Court at Lyons, May 13, 1250, regarding the abuses affecting the Church's life in England: "...What is the cause of this hopeless fall of the Church?", he asks. He then answers that it's the lack of "good shepherds of souls", along with an increase of lousy clerics, and the skirting of pastoral authority. Bad pastoring, he says, has led only to "unbelief, division, heresy and vice" because the living word of the Gospel, source of zeal for concern for the souls of their charges, is being ignored.
Then, with unusual honesty and boldness, Grosseteste goes on: "...And what is the cause of this evil. I tremble to speak of it, and yet I dare not keep silence. The cause and source of it is the Curia itself! Not only because it fails to put a stop to these evils as it can and should, but still more, because by its dispensations, provisions and collations, it appoints evil shepherds, thinking only of the income it yields for a person, and for the sake of it, handing over many thousands of souls to eternal death. And all this comes from him who is the representative of Christ! He who so sacrifices the pastoral office is a persecutor of Christ in his members. And since the doings of the Curia are a lesson to the world, such a manner of appointment to the cure of souls...teaches and encourages those who exercise the rights of patrons to make pastoral appointments of a similar nature, as a return for services rendered to themselves, or to please those in power...The cure of souls consists not only in the dispensation of the sacraments, in singing of the hours, and reading of masses, but in the true teaching of the word of life, in rebuking and correcting vice; and besides all this, in feeding the hungry, giving drink to the thirsty, clothing the naked, housing the strangers, visiting the sick and prisoners -- especially those who are the parish priest's own parishioners..."
I'm guessing that Grosseteste ruffled more than just a few red Cardinals' robes that day, not to mention blew any chance of endearment with Pope Innocent. He virtually sealed his fate as to any chances of being considered for sainthood down the line, not that it probably bothered him that much, and rightly so! But what a model for anyone in church leadership, to humbly, yet forthrightly, "tell it like it is" when necessary: to hold even those in high places accountable for proclaiming the truth of the Gospel. It won't earn you many friends or help you to influence people, and will almost inevitably mark you as a "troublemaker", or as one "out of step", or "eccentric". It's usually a sure stopper for any kind of career advancement, even though that's rarely a priority for such a person.
But my hunch is that Robert Grosseteste slept well at night, and died in the peace of a good and righteous conscience. His whole life's effort had been to take St. Paul at his word: "...since you are eager for spiritual gifts, strive to excel in them for building up the church..." (1 Corinthians 14:12)
Posted by Harry Allagree at 10:24 AM