Remembering the Oxford Martyrs -- And Thelma 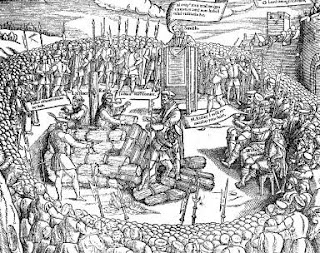 The Martyrdom of Archbishop Thomas Cranmer (1489-1556)
The date of the celebration of the deaths of the Oxford martyrs -- Latimer, Ridley, and Cranmer -- is etched indelibly in my mind for two reasons: 1) it was one of the key dates I needed to know for the General Ordination Exams which I took in 1982, and 2) because Thelma Sullivan's birthday was celebrated on that feast day of theirs, October 16.
From 1983-1986, I served two mountain missions in Northern California: Good Shepherd, Susanville, and Holy Spirit, Lake Almanor. My first pastoral home call in Almanor was to Thelma Sullivan, then 87, whom we referred to as “our token senior”. Thelma’s had lost one eye and wore a prosthesis. Her quiet sense of humor was absolutely refreshing. and sometimes a tad wicked! She’d often ask me and others if her eye was in straight! Most of the families at Holy Spirit were young, but Thelma fit right in despite her advanced age. She was one of the youngest-at-heart people I’ve ever known. She adored the children in the congregation, and especially my son, Andrew. I think she’d been widowed, though I don’t recall for sure. As a young woman, she’d worked for years at the gift shop in the Mark Hopkins Hotel in San Francisco, and she had many friends. When she was up in years she moved up to Clear Creek, between Westwood and Hamilton Branch. She had a perfectly charming little wooden cabin, with a porch, right on Clear Creek, and it always delighted me to visit her. We'd sit and chat for a bit, then have Communion together, usually Rite I which she loved. She kept a large-print prayer book handy so that she could follow along. Then after a brief quiet time, she’d quietly suggest that we break out a bottle of Johnny Walker's which she loved, or sometimes just a pot of tea, and we’d sip our drinks together and share news. She was sharp as a tack mentally and always enjoyed a good joke.
I particularly recall the Holy Spirit congregation showing up en masse at Thelma’s in 1985, to celebrate her 90th birthday with cake and ice cream. I “wondered” out loud if there was any significance to the fact that her actual birthday fell on the commemoration of martyred Anglican Bishops Latimer, Ridley, and Cranmer! I also acknowledged that it fell one day after the feast of Teresa of Avila, noted for saying, “God save us from sour-faced saints,” which, I later made clear in the parish newsletter: “...Thelma is not. (Sour-faced, that is!)...” She was as close to being a saint as one could be, in my opinion.
Thelma had a profoundly wise, simple, spiritually realistic outlook on life, and during our visits we’d often talk at a deeper level about various things. I think she looked on me as a sort of “honorary” son. I certainly loved her, and it was my humbling privilege at the end of her life, two years after I’d left Almanor and gone to be rector at St. John's, Chico, to be called upon to minister to her at the nursing home in Chico where she’d been moved. She died on February 17, 1988, at 92.
I can definitely imagine , after her passing, Thelma schmoozing with the good Bishops Latimer, Ridley, and Cranmer, and sitting down together over drinks to compare notes, maybe even to celebrate their common feast day. I wonder: was it Johnny Walker's or tea?!