Portrait of St. Francis of Assisi,
probably done while he was still living.
Depicts him wiping his eyes, which were
afflicted almost to the point of blindness. 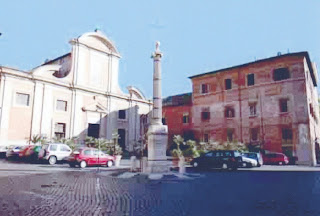 San Francesco a Ripa in the Trastevere section of Rome,
which I visited in 1998.
It houses the cell which Francis had in the adjacent convent
in 1219, as well as the stone he used for a sleeping cushion! 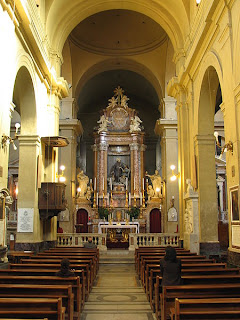 Interior of the Church of San Francesco a Ripa

Processional statue of Francis
in San Francesco a Ripa
Unfortunately, I've never yet visited Assisi. The closest I ever got to a place where St. Francis had lived is the Church of San Francesco a Ripa in Rome. "Beauty is in the eye of the beholder", but I didn't think the church was much to look at aesthetically. Aside from its historical value in Francis' life, there is at San Francesco a magnificent Bernini statue of Blessed Ludovica Albertoni, similar in style to his breathtaking Ecstasy of St. Teresa [of Avila] in the Church of Santa Maria della Vittoria, which I also saw.
The life story of St. Francis of Assisi is intriguing, with all the elements of a bad boy undergoing a wholesale transformation for the good. Though he left few authentic writings, many over the centuries have fleshed out in words and in art the human character who was Francis. Though Francis was pretty much a mess physically speaking, he managed to give a new impetus to the Church's mystical and spiritual life. The simplicity and freshness of his vision really came from his refashioning of the apostolic model reflected in the life of the earliest followers of Jesus of Nazareth. What I think a lot of folks don't know or forget is that this vision had its roots in Francis' rich life experience, both the good and the not-so-good: as a rich kid, a libertine, a fairly capable musician and singer, an idealistic warrior who was quickly disillusioned, an open soul who caught the Divine and never let It go, the indefatigable lover of humans, male and female, and of animals, and a human being himself afflicted with some of nature's worst physical conditions. Francis is the perfect example of how the Christian mystical life finds its voice through a spontaneous, hands-on love of God's creation. Francis said once to Brother Masseo: "Do you want to know why it's me whom people follow -- do you want to know? It's because the eyes of the Most High, continually watching the good and wicked, haven't yet found among sinners any smaller man, or one more insufficient and more sinful. And so the Most High has willed to choose me to do his marvellous work, for there is no one more worthless, by which all the nobility and grandeur, strength and beauty and learning of the world can be confounded."
In 1224, two years before he died, Francis withdrew to the hermitage at La Verna in the Appennines. He was exhausted with work and from the effects of his multiple illnesses, all of which he joyously embraced. After fasting for weeks, contemplating Christ's Passion, and after an entire night spent in prayer Francis apparently had a vision as the sun was rising: "A seraph with outspread wings flew towards him from the edge of the horizon, and bathed his soul in raptures unutterable. In the center of the vision appeared a cross, and the seraph was nailed upon it. When the vision disappeared, he felt sharp sufferings mingled with ecstasy in the first moments. Stirred to the very depths of his being, he was anxiously asking the meaning of it all, when he perceived upon his body the Stigmata of the Crucified."
When Francis felt his last day approaching, he told a Friar to write a letter to his long-time friend, Lady Jacopa de Settesoli Frangipane, whom Francis had lovingly nicknamed "Brother Jacopa". The letter informed her of his imminent death and asked her to come to the Porziuncola. Francis requested that she bring him an ash-colored wool cloth, candles for the burial, and the sweets which she always gave him in Rome when he was ill. The Friars were looking around for someone to take the letter to Jacopa when it was revealed to Francis that she was already enroute.
Soon, there was a knock on the door of the tiny hut, near the chapel which served as an infirmary.
Jacopa had arrived with her sons and was allowed to enter, though customarily women were not admitted to the monastery. Jacopa had brought all the things which Francis had requested, including the sweets made with almonds, sugar, honey, and other ingredients, called mostaccioli [spicy, chocolaty cake-like cookies with almonds] in Rome.
Today, in Umbria, these sweets are still made in Francis' memory. Jacopa also brought Francis a red silk cushion, adorned with her family's coat of arms, and her bridal veil, embroidered with these words:"Ama, ama, ama = Love, love, love". Jacopa related to Francis that while she was praying in Rome, she had heard a voice from heaven, saying that he would soon pass from this life, and that he would ask for the very things which she had now brought him.
Lady Jacopa remained at Assisi until Francis' death, funeral, and burial, for which she bore the whole cost. She then returned to Rome where she lived for more than ten years. Her son, Giacomo, died in 1230. When she later made her will, she left all her properties to her son, Giovanni, and demanded to be buried at Assisi. In 1239 "Brother" Jacopa died at Assisi, where she'd moved several years before her death. She was buried in the lower church of the Basilica, near the altar that overlooks Francis' tomb. In 1932, her remains were moved in an urn to the Saint's Crypt, opposite the altar, between the two flights of stairs, behind a black metal grill. There is an inscription on the urn which reads: "FR. [Frater = Brother] JACOPA DE SEPTEMSOLI", and another below it: "HIC REQUIESCIT IACOPA SANCTA NOBILISQUE ROMANA" = "Here rests the holy and noble Roman lady, Jacopa".
Posted by Harry Allagree at 12:19 PM