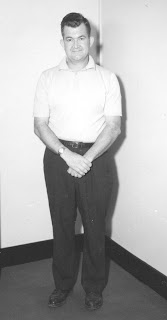 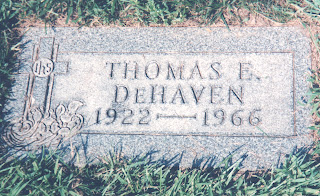 My mother began dating my stepfather, Tom DeHaven, in 1952. I'm fuzzy on how or where they met, but since that was in my mother's drinking days, and Tom's, I suspect that they met at their favorite bar, called The 19th Hole. Tom had come with Mom for several visits when I was at Brunnerdale Seminary, in 1953, my junior year. Though he presented himself from the beginning as a nice-enough guy, I was naturally threatened by any "intruder" between Mom and me, having lived alone with her from childhood. I knew something was up because Mom had been talking again, as she had in 1948, about having my father declared legally dead. After my father resurfaced then and was arrested, having worked out an agreement, he skipped out on his court-ordered alimony payments, and must've laid low because we never heard from him again, nor did the authorities pursue him. At first I brushed off Mom's talk of having him declared dead, but, of course, wondered why it suddenly was so important to her after all these years. After Mom's death in 2003, I came into possession of all her papers and learned that she and Tom had obviously been contemplating marriage, possibly as early as 1952. They'd even gotten blood tests in mid-February, 1953. In the meantime, Mom never discussed it with me.
By mid-summer, again unbeknownst to me, Mom's petition for a decree of divorce from my father was in the final stages, and was finally granted on July 24, 1953. Mom and Tom must have had the wedding planned almost to the minute. They obtained a marriage license in Liberty, IN, about an hour's drive west of our home in Dayton, OH, the same day as the divorce became final. They were married immediately afterwards at Edwards Memorial Methodist Church there. The marriage certificate includes a picture of the parsonage, a lovely white Victorian two-story, with a porch and what appears to be a sizeable yard, and two photos of the newlyweds.
Unfortunately for me, Mom broke the news to me in a letter which I received the afternoon before I was to go home for my vacation. "Home" had suddenly changed from apartment I'd been used to, to another one in the same area. I felt devastated and betrayed: not only because I'd been the very last to know what was going on, but also because of the fact that my mother had been married outside the Catholic Church. In those days, especially if you happened to be studying for the Roman priesthood, that was a BIG deal! Immediately upon reading the letter, I went to the chapel where I knelt sobbing for a long time. For some years after that, I subconsciously refused inwardly to forgive my mother for this, and, unfortunately, my attitude towards Tom was anything but warm. It took me about four years to work this through, to forgive Mom and to accept Tom for the incredible person I came to know and recognize him to be. Thankfully, he turned out to be a real father to me and truly one of the best friends I've ever had. Tom was generous to a fault, almost always upbeat and smiling, with a quick sense of humor, and always doing favors for his mother and his six siblings, for Mom and me, and just about anyone else who needed him. He was extremely inventive, and with spare material from his job at Frigidaire, where my grandfather had worked, he created practical things like a napkin holder and a set of candlesticks which I still have, and one of my most prized possessions: his jewelry box made of inlaid wood, a real masterpiece. He was an avid bowler, along with his oldest brother, Bill, and won a number of league awards.
In 1966 I was already Chaplain at Sacred Heart College [now Newman University] in Wichita, KS. At that time my Mom had come down with serious phlebitis and was on periodic bed rest. I'd just retired around 1:00 AM the morning of October 21, when I received a tearful call from my Aunt Joan. My first guess was that perhaps Mom had died. But it was Tom. He'd had a sudden heart attack the night before, October 20. He'd worked that day, but experiencing some chest pains he'd gone to see the company nurse. She had him lie down to rest, then sent him home thinking he might have had indigestion and was now okay. After he went to bed, Mom heard a moan, and by the time she reached him he'd died.
Both Mom and I took Tom's death very hard, though I mostly internalized it. There are times even now when I still become emotional thinking about him. He died seven years before my natural father did, though I didn't know that at the time. Once both Mom and Tom had stopped drinking several years earlier, things were very good, and there was never any question how deeply they loved one another, and me. On October 22 I celebrated the Requiem High Mass at Our Lady of Mercy Church, Dayton, OH, which had become our family parish, surrounded by family, friends, and a good number of Precious Blood priests who'd assisted at my first Mass there two years before. Tom began taking instructions in Catholicism in mid-October, 1961, from Fr. Cletus Foltz, C.PP.S., who'd been Rector when I was at Brunnerdale Seminary, and was then pastor of St. Joseph's Church, Dayton. Fr. Foltz baptized Tom there on December 15, 1962, and Tom received his first Communion the following day, December 16.
43 years now! A long time. God's peace to you, Tom!
Posted by Harry Allagree at 2:06 PM