The Chrysorrhoas ("streaming with gold") Poet 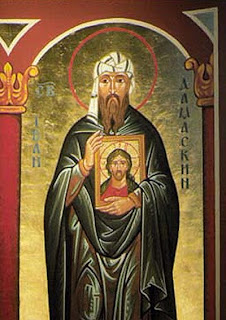 In his essay "After Modernism," composer Morton Feldman writes:
"There is a strange propaganda that because someone composes or paints, what he necessarily wants is music or a picture. Completion is not in tying things up, not in 'giving one's feelings,' or 'telling a truth.' Completion is simply the perennial death of the artist. Isn't any masterpiece a death scene? Isn't that why we want to remember it, because the artist is looking back on something when it's too late, when it's all over, when we see it finally as something we have lost?"
Sergei Taneyev's Cantata John of Damascus, also known as A Russian Requiem, stands as a masterpiece, and a highly personal one. One could hardly ask for a more beautifully performed version than the 1976 recording from the Alexander Yurlov Russian Chorus.
Taneyev's Cantata is based on a poem by Count Aleksey Tolstoy (a distant cousin of the author of War and Peace) Tolstoy's poem, John of Damascus, retells the life of "one of the greatest, if not the greatest, liturgical poet of the Byzantine tradition" (Andrew Louth). The Cantata was first performed in 1884 in memory of Nicolai Rubinstein, and Taneyev could have expected many of those in attendance to be already familiar with Tolstoy's work (an unusually long poem for the author's output).
The culmination and focal point of Tolstoy's poem is a self-contained section of the narrative titled Troparion, differing starkly in mood and content from the remainder of the work. In the Eastern religious traditions, a troparion is a short hymn of one stanza, or one of a series of stanzas. But while Tolstoy uses the singular form troparion, he supplies five stanzas as opposed to one.
The Slavic literary scholar D.S. Mirsky has written that "there is nothing after Derzhavin to compare with the solemn beauty of [Tolstoy's] paraphrase of St. John Damascene's prayer for the dead, used in the Orthodox Church." Thus, the first stanza of Tolstoy's Troparion begins with words closely recalling those attributed to St. John and used in the Orthodox funeral service: "Everything human is vanity, / For none of them exist after death. / The rich man does not survive, nor does his glory follow him. / For when death approaches, everything vanishes...."
"What joy in this life has no part in earthly sorrow? Whose hope is not vain, and where among men is there one who is happy? All that we have acquired with effort is inconstant and worthless; what earthly glory stands firm and
unchangeable? All is but ashes, phantom, shadow, and smoke, everything will vanish like the dust of a whirlwind..."
But in the next stanza John addresses us in the first person:
"Death fell upon me like a furious warrior, and like a beast of prey it struck me down; the grave opened wide its jaws and took away all the things of this life. Save yourselves, kinsfolk and children, I call to you from the grave..."
And so on into the fifth stanza finally used by Taneyev:
"I tread an unknown path, my journey lies between fear and hope; my sight is extinguished, my breast has grown cold, my ears do not hear, my eyelids are closed; I am lying voiceless, without movement, I cannot hear the brethren
sobbing, and the fragrance of the censer's blue smoke is not for me; but, though I sleep the eternal sleep, my love is not dead, and by that love I implore you, my brethren, each one of you, to call thus unto the Lord: O Lord, on the day when the trumpet shall sound the end of the world, receive Thy departed servant into Thy blessed habitations!"
After renouncing the writing of poetry and entering a monastery, so the story goes, John of Damascus regained his ability to sing, to write lyric verse, after agreeing, out of compassion, to write some funeral verses for a grieving fellow monk who had lost a friend. But to get to this point of "rebirth" (above all, the idea of resurrection is ultimately celebrated in the Orthodox funeral service), it was first necessary to "die to the world."
These along with other ideas provide food for much productive speculation concerning Taneyev's First Opus.
On the door of Taneyev's small, nearly inaccessible retirement house outside Moscow (which had neither running water nor electricity) was a permanent sign which read: "Sergei Taneyev is not at home."
Posted by Harry Allagree at 10:10 AM