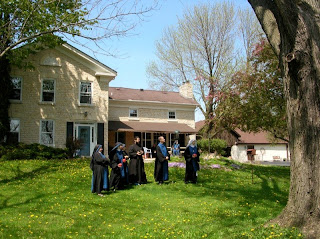 On December 30, 1985, a simple house in Norwich, CT became a "monastery" for an experimental beginning of a new community in the Episcopal Church, called The Order of Julian of Norwich. On this day The Rt. Rev. W. Bradford Hastings, Suffragan Bishop of the Diocese of Connecticut and Episcopal Visitor of the Order, heard the solemn profession of Life Vows of the Order's founder, Fr. John D. Swanson, known in religion as Fr. John Julian.
Born in Green Bay, WI, Fr. John attended Carleton College and earned a Master of Divinity degree from Nashotah House Seminary in 1957. Ordained as a priest of the Diocese of Fond du Lac in August, 1957, he served in various parishes for the next three years. After 10 years as a rector in New Hampshire, Fr. John's widely varied career involved him as dean of the Seminary of the Streets in New York City; consultant in humanistic education in Rhode Island; drug abuse prevention project director; private practice in psychotherapy; director of the Connecticut Foster Parent Training Program; director of Connecticut's Social Service Institute, training social workers; and supply priest in local Episcopal parishes.
In June, 1982, while rector of the Church of the Resurrection in Norwich, CT, Fr. John traveled as a pilgrim to the Julian Shrine in Norwich, England. At the time he began the pilgrimage, he had no intention of founding a monastic order, nor of becoming a contemplative monk. In fact, at age 48, he would probably not have been accepted into a monastic order! During a prayerful time in Norwich, however, he came to the realization that, in his words, “This isn’t enough! There must be something more!” Midway over the Atlantic, as he was returning to the U.S., he conceived the idea of restoring the medieval practice of a mixed monastery of men and women devoted to Julian of Norwich.

Predating the founding of the Order, as early as 1973, groups of people in England had formed ecumenical gatherings, “Julian Meetings”, as they were called, of devotees of Julian, mainly to support one another in a life of still prayer. Ten years later, similar but separate groups, called “Julian Gatherings”, began to be formed here in the U.S. and continue to the present.
Fr. John had begun living the Rule which he wrote in 1982. Fr. Bill Melnyk became the first Oblate on January 19, 1984. Several Associates were also admitted, and Sister Scholastica Marie Burton, later the beloved second Guardian of the Order, became the first postulant seeking to become a Member Regular. Within six years Sister Scholastica Marie and Fr. Luke Radtke, both now deceased, had taken Life Vows. Two years later Sister Cornelia and Brother Gregory Fruehwirth (later Father Gregory, and current Guardian of the Order) took Life Vows.
Fr. John Julian, founder and first Guardian, retired in August, 1995, and several years ago was granted permission to live as a solitary. He has continued a vigorous ministry as a writer, producing A Lesson of Love: The Revelations of Julian of Norwich, 1988; Stars In A Dark World, 2009; and The Complete Julian of Norwich, 2009. Sister Scholastica Marie was elected, then installed as the second Guardian in September, 1995. She resigned in April, 2003, suffering from cancer. Her successor, Fr. Gregory Fruehwirth, became the third Guardian on April 22, 2003. Sister Scholastica Marie died six months later, on October 18, 2003.
The Order of Julian of Norwich is a contemplative monastic order of monks and nuns in the Episcopal Church. "Following the most venerable practices of contemplative Christian monasticism," says the Oblate manual, "we aim to renew the spiritual life of the Church." Besides the Members Regular (OJN) there are professed Oblates (ObJN), as well as Associates (AOJN), married or single, clergy or lay, who affiliate themselves with the Order by prayer and financial support as they live the contemplative life in the world. The Order’s four-fold vows are poverty, chastity, obedience, and prayer. The Members Regular live in semi-enclosed community and fully observe the traditional vows. The Oblates, seriously committed to a spiritual and contemplative life in the world, make profession to live under an adaptation of the Regular vows after a significant period of probation. The Associates, desiring a spiritual bond with the Community in its prayer and work, follow a less stringent Rule of Life. The Affiliates seek to live into the same contemplative depth and unceasing prayer as do the Members Regular, and their rule of life is moderated only in degree in order to meet the needs of living in the world.

The Order looks first to the worship of God, secondly, to the support and strength of the wider community of the Order -- its Oblates and Associates -- and thirdly, to service within the whole Church and the world. A significant part of the Order's ministry is the spiritual renewal of clergy, parishes, and individuals in the classical Christian traditions of contemplative spirituality and mysticism, and the revival of those traditions in the life of the contemporary Church and of the contemporary Christian.

Currently there are 8 Members Regular (5 women/3 men), 2 Novices (1 woman, about to make Junior Vows; 1 man), and 1 Postulant (1 woman, about to be clothed as a Novice on January 2); 77 Oblates, including Archbishop Desmond Tutu; 11 Oblate Probationers; and 131 Associates, representing some 35 states in the United States, as well as the countries of Canada, England, Scotland, and South Africa.
Almighty God, all times are in your hand,
and all occasions serve your will:
Accept our prayers of thanksgiving and hope
which we offer here today and in all
days to come, that our community may ever
continue in your mercy and grace
and never falter in our gratitude to you;
through Jesus Christ, our only
Mediator and Advocate. Amen.
Posted by Harry Allagree at 2:55 PM