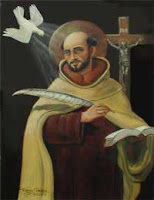 The life of John of the Cross could be summarized in two words: suffering and love. All through his life, this quiet, contemplative man endured relentless challenges and immense inner anguish and distress. Later in his short life of only 49 years he wrote: "It should be noted...that all the harm the soul receives is born of its enemies...the world, the devil, and the flesh. The world is the enemy least difficult to conquer; the devil is the hardest to understand; but the flesh is the most tenacious, and its attacks continue as long as the old self lasts..."

His advice on how to deal with suffering:
"...strive to keep your soul occupied purely and entirely in God..."
"Never give up prayer, and should you find dryness and difficulty, persevere in it for this very reason. God often desires to see what love your soul has, and love is not tried by ease and satisfaction."
"...you must undertake all things, agreeable or disagreeable, for the sole purpose of pleasing God through them."
"A la tarde te examinarán en el amor. - "When evening comes, you will be examined in love."
The essence of what John of the Cross stood for could, perhaps, be best understood in his original drawing of the crucifix, seen below. Though he used, and is most famous for, poetry as a vehicle for expressing his deepest inner thoughts, in this instance John used a simple artistic rendering, with an interplay of darkness and light, evoking from those who view the drawing strong emotions of devastation, on the one hand, but also of hope. 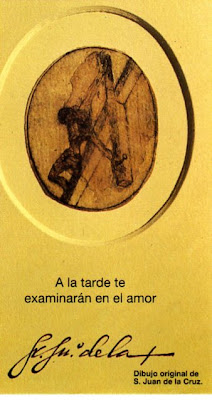 John's drawing is a simple one, with an oval border, done in pencil and ink on grainy parchment. It obviously wasn't meant as a museum piece, but seems to have been John's expression of his own prayerful, meditative moment. He gave it, in fact, to one of the Carmelite sisters at the Convento de la Incarnación: Sor Ana Maria de Jesús. Those who view the drawing, as I was privileged to do in 1998 at the museum in Ávila, can see that it's in relatively good condition. It measures approximately 3 x 4 inches. Only Christ and the cross are depicted. The viewer's perspective is unusual: one is forced to look down from above and slightly in front of the cross. The cross itself leans to the right, appearing to almost fall backwards. The Christ figure falls forward, to the left, as if to counterbalance the cross. René Huyghe, former Conservator-in-Chief of the paintings in the Louvre has written: "...The vertical perspective -- bold, almost violent, emphasized by light and shade -- in which he caught his Christ on the cross cannot be matched in contemporary art..."
The drawing depicts intense suffering. Christ's knees buckle, the arms are tensely stretched back and held in place on the cross's beam by rather huge spikes. There is evidence of blood falling from them. The shoulder and back muscles strain at the weight of Christ leaning forward, and the chest is swollen. Christ's left hand extends out to the viewer, though his face and features are hidden in the shadow of the cross. The drawing engenders feelings of helplessness and despair.
On closer examination, however, one can't miss the light emanating from behind the cross, illuminating the cross beam and the side of the cross. A person looking at this simple scene finds her/himself smack in the middle, so to speak, of John's perspective. Graham M. Schweig, in an article on the drawing, suggests that this leads us in the direction of understanding this work of John's in light of his mystical doctrine of God's love. "...In his writings he intricately describes the rigorous ascetic practices of the mystical life and his experiences of divine union with God. This perfection of divine union is characterized by a marriage between the individual soul, who is always the bride, and Christ, who is the beloved Bridegroom. This 'bridal mysticism' is central to St. John's teachings. Given this fact, why does St. John emphasize the crucifixion in this extraordinarily vivid drawing?...In St. John's prose and poetry, the interpretation of the crucifixion drawing is powerfully aided specifically by several stanzas from the seventh of his 'Romances'...:
I will go and tell the world,
spreading the word
of your beauty and sweetness
and of your sovereignty.
I will go seek my bride
and take upon myself
her weariness and labors
in which she suffers so;
and that she may have life
I will die for her
and lifting her out of that deep,
I will restore her to you.
The essential message of St. John's drawing of the crucifix is revealed by these verses. As these verses plainly express, Christ (the Bridegroom) wants to relieve the soul (the bride) of her suffering by taking it upon himself, and in doing so, restores the soul to the Father...St. John, through his artistic work, powerfully conveys the experience of his relationship with God to the viewer, thus allowing the interpreter direct access to his experience: the viewer of this work is truly the bride, who is looking on from above at the tortured Bridegroom. Compelled in the direction of the light source, the viewer is restored to the Father...While the bride experiences feelings of grief and separation, she also possesses a sense of hope because of the element of light that conveys the presence of the Father to whom the bride is restored..."
Posted by Harry Allagree at 1:08 PM