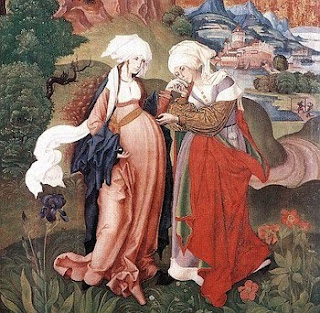 Many times throughout my 25 years of active ministry, I mentioned that my closest experience to having a baby was writing a weekly sermon! Aside from producing a couple of healthy sermons and probably some that were “stillborn”, the process involved a lot of “wondering”: like that of a pregnant woman:
- will it be a boy or a girl?
- will it be healthy?
- what will it look like?
- what will the child experience while growing up?
- where will life’s path lead the child?

Surely Mary, as well as Elizabeth, her cousin, must’ve wondered like this. Luke intimates in Chapter 2 of the Gospel that Mary was a thoughtful, sensitive person, saying: “Mary kept all these things in her heart.”

Advent is a season for wondering, for being sensitive to what is really important in life. For the past three weeks we’ve waited and thought hopefully about the coming, the advent, of Jesus into our lives: in the beginning of creation, in his physical birth and life, in our inner lives constantly, and when he will ultimately come again to humanity. And we’ve discerned how we can prepare ourselves, individually and as the Body of Christ, for those comings.

Our guides through Advent have been Isaiah, the great 8th century B.C. prophet, who apparently was born into a privileged priestly family; and John the Baptizer, also from a priestly family, the mysterious young ascetic and relative of Jesus who roamed the Judean desert, daring to challenge self-righteous civil leaders and “religious” people to change, to turn their thinking around, to repent. These two guides, too, must’ve wondered: why they were compelled to preach God’s word as they did in order to make complacent people uncomfortable; and who was this Holy One who was to come at some time in the future.

Today, the last Sunday of Advent, the Church sets before us Micah and Mary: two relatively unknown people: both sensitive, both “wonderers” about the Holy One to come. Unlike the princely Isaiah, Micah wasn’t a native of Jerusalem, the Jewish capital, but only a simple man from an unknown village southwest of Jerusalem, called Moresheth. Isaiah wrote his prophecies in 39 chapters, with a whole chapter devoted to a dramatic account of his own calling by God. The BCP also uses Isaiah for a good 2/3 of its Old Testament lessons. The Book of Micah, on the other hand, opens with a simple statement: “The word of the Lord that came to Micah of Moresheth...” His prophecies are used only twice in the BCP’s three-year cycle. Yet both prophets were commissioned to announce the coming of the Holy One of God.

The story of Mary’s visit in Luke (1:39-55) reads almost like an account from a diary. Luke says that Mary “arose and went with haste”, with dispatch, diligently, all-business, to visit her kinswoman, Elizabeth, who, though “advanced in years”, was pregnant with a baby who would be John the Forerunner. You can imagine the flurry of happy greetings as long-separated relatives are reunited: something like our experiences during the holidays. Perhaps Elizabeth’s hands drop to her swollen belly as she says to Mary: “Oh, the baby just now jumped!”, and perhaps they enjoyed a motherly laugh among themselves. Womantalk, of which men know little.

Then perhaps Elizabeth’s eyes fix on Mary, as she warmly embraces her, and Elizabeth is suddenly overcome by a strange emotion (Luke and we call it “Holy Spirit”), and she shouts: “Blessed are you among women, and blessed is the fruit of your womb! And why is it granted to me,” she wonders aloud, “that the mother of my Lord should come to me...? Blessed is she who believed that there would be a fulfillment of what was spoken to her from the Lord.”
We could imagine her pausing then and wondering aloud: “Whatever made me say that?!”

But Mary knew. She, too, had wondered, quite a lot in fact, what was happening to her since the day she’d had that “experience” of God’s messenger. As she embraced her older kinswoman, Mary’s mind flashed back to that time when the angel messenger had come to her, speaking words that confused her: “highly favored one...the Lord is with you...you will conceive a son...Jesus...son of the Most High...the throne of his father, David...reign over the house of Jacob...of his kingdom, no end.”

As Elizabeth, she, too, had felt herself overcome with a filling, a completeness, a “rightness” inside: the messenger had referred to “the power of the Most High”. And then she knew. “For,” as the angel had said, “with God nothing will be impossible.” Spontaneously, Mary blurted out: “Yes, I am the Lord’s handmaid; let it be to me according to your word.” And then the messenger was gone.

As Elizabeth releases Mary and they stand face-to-face, hand-in-hand, beaming as only women who share the experience of pregnancy can, Mary, perhaps with tears of joy, breaks into a paraphrase of the prayer of praise spoken centuries before by Hannah, the prophet Samuel’s mother: “My soul proclaims your greatness, O God, my spirit rejoices in you, my Savior...” Mary first praises the God whose presence she had personally felt, to whose call she had immediately responded, yet whose workings had caused her to wonder. She, a nobody, will be part of a community to be known throughout all generations as blessed. Not, indeed, because of herself, but because she was to bear the Holy One of whom Isaiah and Micah had wondered about and awaited long before her: the Holy One whose coming her yet-to-be-born cousin, John, would proclaim with such urgency.

Mary also praises the God whose presence her people, Israel, the nation, had experienced. But here’s really something to wonder about: was God’s involvement with the V.I.P’s, the rich and the famous?? No, God’s focus of attention and concern was on the nobodies, “the lowly”, the depressed, the humiliated ones, the outcasts. God scatters the proud in their fantasies, “bursts their bubble”, so to speak. God dethrones the mighty, removes from them the control of people’s lives.

The greatest good thing which God gives, though, is what Israel, the nation, and each person in it wondered about for centuries: would God, despite their repeated selfishness, pride, injustice to one another, and greed, still keep God’s word, God’s promises of old? Don’t you and I frequently wonder about this? Will God really deliver? in my life? in my circumstances? Mary’s prayer should reassure us: “You have come to the help of your servant Israel”, remembering God’s mercy, being there with and for them: “The promise made to our forebears, to Abraham, Sarah, and their children for ever.”

Israel dreamed of peace (shalom) as something only God could achieve. Peace in the land would be the sign of the advent, the coming, of the last days and of the Holy One who would save them. And all in simplicity and quiet: nothing on the grand scale. No thunder and lightning. No trumpets playing Hail to the Chief!


Time and again these characteristics of littleness and of quiet appearance on the human scene are signs that God is here and active in our lives. Yet, as for the Israelites, this marvel of human redemption, the marvel of God becoming present, God with us = Emmanuel, comes about in our lives only over the long haul. It takes time -- and so we wait, and wonder.

The message of Micah and Mary today suggests that you and I use what little is left of our Advent time of waiting and wondering to try to understand, as they did, all that is meant by the words: “the Lord will come”, even as in our hearts we sense that He is already here.

Posted by Harry Allagree at 8:26 AM