The Conception of Mary, the Virgin 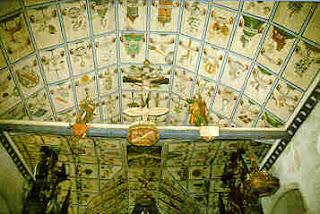 The Conception of the Virgin Mary, defined in 1854 by the Roman Catholic Church as the dogma of the "Immaculate Conception" of Mary, is a Christian mystery and feast, observed by the Eastern Orthodox, Catholic, and Anglican/Episcopal traditions, and remains a subject endlessly mysterious and a seemingly inexhaustible theme for reflection and deeper understanding. Meant to be an expression of God's overwhelmingly gracious love for Mary and, through her Son and her, for each one of us, it has found numerous expressions in the language of poetry and art.
In the 16th through 18th centuries symbols or emblems with accompanying inscriptions, usually in Latin, became popular in expressing some of Mary's spiritual traits and characteristics. The ceiling emblems shown above are from the Pilgrimage Church of Hergiswald, near Lucerne, Switzerland: a small but well known Marian pilgrimage shrine. In 1654 Kaspar Meglinger painted the church's wooden ceiling with what is considered to be the most extensive collection of Marian symbols and inscriptions, 321 emblems in all, relating to Mary's person and role.
A sampling of the Hergiswald symbols reminds us that Mary is a perfect reflection of God's light; that she is wholly Christ-centered; that in Mary God's own Son came to share our humanity; that Mary, as alluded to in Revelation 22:17, makes God visible as "Bride of the Spirit"; that she is the highly graced and favored one of God; that she stands as the threshold between the Hebrew and Christian Testaments; and that Mary has the unique mission of leading us to Jesus her son.
In his explanation of the liturgy and theology of this feast in his timeless classic, The Church's Year of Grace, Fr. Pius Parsch notes that "In the Advent season, when we are yearning for God's kingdom, Mary appears as its supreme expression. Her feast, therefore, is another inducement to give serious thought to the kingdom of God..." He goes on to say that when we pray in the Lord's Prayer: "Thy kingdom come", our minds usually conjure up the geographical/ temporal expansion of God's realm, but often remain unattuned to how God's reign might flourish and come to fullness within us. Jesus says in the Gospel: "The kingdom [reign] of God is within you."
Pius Parsch suggests that a sound understanding of the theological reality and feast of the Conception of the Virgin Mary includes several elements:
1) Mary was born without sin. Yet her sinlessness isn't the real focus of our attention, but "the smaller part of her greatness. Sinlessness would hardly make her much different from a newly-baptized infant..." The key theological focus is that any Christian's greatness depends on God's grace, on the degree in which the reign, the presence of God is ingrained in one's being. Gabriel says to Mary: "Hail, O highly favored one of God, the Lord is with you, blessed are you among women." It's a positive affirmation that, indeed, in Mary the fullness of God's presence, God's reign, abides in her with a unique strength and reality which no other creature possesses.
2) Can God's reign grow and increase in us as it did in Mary? Many of us grew up with the idea that the less you "sin", the more holy you are. While sin is to be avoided, sanctity doesn't rest on that alone. People often unfortunately confuse grace/holiness with the practice of the virtues. Parsch notes that some Christians have undesirable inclinations with which they struggle, sometimes for their whole lives, yet have an abundance of inner grace by God's blessing. Others who by nature find it rather easy to practice the virtues may not experience God's reign at the same depth.
3) Any one of us can, like Mary, grow in God's favor and grace. But we must always bear in mind that, first of all, the growth is primarily God's business, not ours. In fact, God's favor and grace is a pure gift, undeserved and unmerited. As Mary was probably not even conscious of it in herself, so for us. Yet, like her, our way of living must consistently consist in a self-surrender to whatever God wants, as God wants, and according to the time-frame God wishes. We show our good willingness through prayer, sharing the Sacraments, accepting the challenges and suffering which we experience in whatever place we find ourselves called by God, fulfilling the immediate responsibilities we're given, and living in the presence and mystery of God through Jesus throughout the Church's liturgical year which guides us.