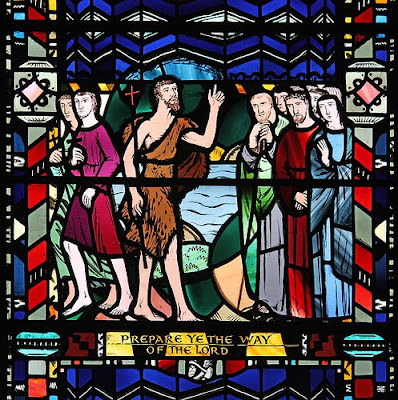 The desolate area of the Jordan River, where John preaches in the Gospel reading for the 3rd Sunday of Advent (Luke 4:7-18), conjures up a memory from May, 1970, when a priest friend asked for assistance on retreat for the Sisters of St. Joseph up in Sudbury, Ontario, Canada. I remember well my shock and horror on the landing approach into Sudbury: the whole landscape below was utterly grey, lifeless, and desolate. There was no sign of life or activity until we were actually over Sudbury. I learned later that up until the 1980’s, the area was literally referred to as a “moonscape”.

The land which eventually became the city of Sudbury and its surroundings was hit about 1.85 billion years ago by a falling asteroid, approximately 6-12 mi. in diameter, creating a crater almost 12.5 mi. deep, and melding the rocks together to form a kidney-shaped basin, resulting in a mother lode of nickel, copper & platinum. People stumbled on this and began mining the ores in the 1880’s & 1890’s, continuing up to the present. As a side note, some of Sudbury’s nickel was used in constructing the Statue of Liberty in the ’30’s, as well as for the roof of the National Cathedral in Washington, D.C.

Over the last century, mining pollution killed off wildlife and made the denuded landscape look like a lunar surface. By the time I visited there, it had the reputation of being the biggest producer of acid rain-causing chemicals in North America. Remarkably, big changes came about in the 1980’s which led to a phenomenal beginning of restoration of the environment there.

So I think of something like this for the desolate region around the Jordan in which John the Baptizer preached: ugly, the water full of silt, surrounded by marl hills, dry scrub brush, extremely hot and arid, with little life. There were lots of venomous vipers (asps), sly, deadly, carrying poison in their systems. And lots of rocks and stones (Hebrew = abanim), with which Luke plays on the words in v. 8 where Hebrew = banim = children.

John summons all the people around him to the desert, the wilderness. Many have tried to identify John with the Dead Sea covenant community at that time, called the Essenes, who, as John did, quoted 2nd Isaiah (vv. 3-6) to refer to the Torah (Law) commanded through Moses, through which the revelation of God’s glory comes. For John, of course, this is Jesus. John’s message is: “Don’t be like vipers: crafty, deadly with the poison of malice and evil. Don’t be like the scrub brush, but bear fruit: fruit of repentance, charity, and justice.”

The brand of repentance which John the Baptizer preached was conversion (Greek = metanoia): a radical change of heart. John tells the people not to be like the rocks and stones (abanim) -- prideful followers of Abraham -- but to be children (banim) of the Father who sent Jesus the Christ, the Holy Anointed One. John insists on interior holiness, not racial descent (or, in our case, baptismal descent!). God can beget the spirit of Abraham, the father of faith, more easily in humble Gentile penitent sinners than in self-righteous children of Abraham. John insists on the need to bear fruit, good fruit. He predicts that out of all this desolation, if people are willing to open their hearts to the Holy One, a new beginning can blossom.

Just as the crowds ask John, “What, then, should we do?”, so we in our Advent journey ask the same question. How do we bear fruit and change our hearts? John advises them, in general, to do the basic works of charity and justice: if you have two coats, share one; from the abundance of your own food, share with others who have little or none. Essentially, he tells the various questioners coming to him to carry out their ordinary responsibilities, but with extraordinary care. He tells the tax collectors to take only what they’re supposed to, and not to scam or extort interest. Soldiers are not to misuse their power through violence or false accusation. They’re to stop griping about their wages -- after all, they’re “civil servants”, government employees.

So, what about you and me? What are we to do? Whether a person is a teacher, a secretary, a contractor, a student, a priest, a housewife, a salesperson, etc., you and I are to “bear the fruit of repentance”. These Gospel words try to help us recognize the depth of our own inadequacy and of our desperate need for a savior -- Jesus, Yeshua = “He saves”.

John’s message directs us to the Savior, the Messiah, and to our need to open our lives and ourselves in expectation of his saving presence. John’s preaching stirs up in us a longing for the promised, long-awaited salvation. John’s baptism with water, as was noted in last Sunday’s Gospel, is a “baptism of repentance”, of a transformed heart. Jesus baptizes us with Holy Spirit and fire, which is synonymous with God’s powerful, purifying presence. When we come into God’s presence through Jesus we’re seen as we really are. Like a winnowing fan, blowing chaff away until only the wheat is left, so all our insincerity, hypocrisy, and cover-ups are blown away by the breath of God’s Spirit.

In being himself baptized by John, Jesus isn’t confessing that he’s a sinner, but rather he’s proclaiming that he has arrived, that he’s here, that God is here, Emmanuel = God with us, that he’s present to and united with sinful humanity in every aspect of our lives.

Because of that reality, we have hope. A new beginning can happen in your life and mine; we’re not imprisoned in our desolation forever. Farmers are well acquainted with the necessity of periodically burning back the stubble of their agricultural fields in order to keep the soil naturally rich. Our life, too, is like a field which needs to be burned back. Christian living isn’t so much an arrival as it is a search. Jesus is calling you and me during Advent to change, to search, to look at ourselves and our lives with new eyes, to let ourselves be transformed. And that can, indeed, be frightening. But our hope lies in the reality that Jesus comes to be God with us, to be present and at work in our lives, beside us and in us.

Fr. Gerard Sloyan, whom I was privileged to have as a theology professor at Catholic University of America in Washington in 1966, in commenting on this gospel of Luke says: “...The practical advice of John on how to prepare for the coming of the one ‘mightier than I’...we can handle. Sharing clothes, sharing food. We know we should do it but out of negligence we fail to. Avoiding the crooked little deals (and the crooked big deals) that are a way of life with us. Abjuring violence, the psychic more than the physical. Being content with what we have. A better list for ways of reform than John’s is hard to imagine. All the lies, the bullying, the wanting something for nothing that make us a mean-spirited rather than a free people are there in his brusque replies: ‘Let go of it, give it back, don’t go for it.’"

Advent’s message is not always a comforting one. Advent isn’t a warm and cuddly time, but a rather serious and harsh reality. The Prince of Peace is “set for the fall and rising of many”. You and I have a brief season in which to repent, to change, to open ourselves.
Only then can Jesus truly come among us.
Posted by Harry Allagree at 11:01 AM