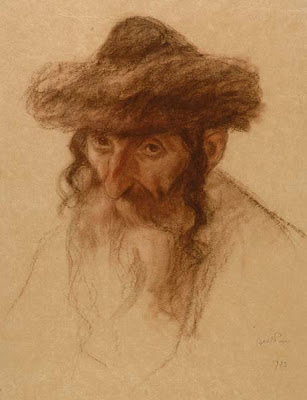 There is a story, perhaps a myth. Typical of mythic stories,
it has many versions. Also typical, the source of the version
I am about to tell is obscure. I cannot remember whether I heard
it or read it, or where or when. Furthermore, I do not even know
the distortions I myself have made in it. All I know for
certain is that this version came to me with a title.
It is called “The Rabbi’s Gift.”
-- M. Scott Peck, M.D., in the Prologue to his book The Different Drum:
Community Making and Peace, 1987
+ + +
“The story concerns a monastery that had fallen upon hard times. Once a great order, as a result of waves of antimonastic persecution in the seventeenth and eighteenth centuries and the rise of secularism in the nineteenth, all its branch houses were lost and it had become decimated to the extent that there were only five monks left in the decaying mother house: the abbot and four others, all over seventy in age. Clearly it was a dying order. In the deep woods surrounding the monastery there was a little hut that a rabbi from a nearby town occasionally used for a hermitage. Through their many years of prayer and contemplation the old monks had become a bit psychic, so they could always sense when the rabbi was in his hermitage. "The rabbi is in the woods, the rabbi is in the woods again" they would whisper to each other. As he agonized over the imminent death of his order, it occurred to the abbot at one such time to visit the hermitage and ask the rabbi if by some possible chance he could offer any advice that might save the monastery.

The rabbi welcomed the abbot at his hut. But when the abbot explained the purpose of his visit, the rabbi could only commiserate with him. "I know how it is," he exclaimed. "The spirit has gone out of the people. It is the same in my town. Almost no one comes to the synagogue anymore." So the old abbot and the old rabbi wept together. Then they read parts of the Torah and quietly spoke of deep things. The time came when the abbot had to leave. They embraced each other. "It has been a wonderful thing that we should meet after all these years, "the abbot said, "but I have still failed in my purpose for coming here. Is there nothing you can tell me, no piece of advice you can give me that would help me save my dying order?" "No, I am sorry," the rabbi responded. "I have no advice to give. The only thing I can tell you is that the Messiah is one of you."

When the abbot returned to the monastery his fellow monks gathered around him to ask, "Well what did the rabbi say?" "He couldn't help," the abbot answered. "We just wept and read the Torah together. The only thing he did say, just as I was leaving --it was something cryptic-- was that the Messiah is one of us. I don't know what he meant."

In the days and weeks and months that followed, the old monks pondered this and wondered whether there was any possible significance to the rabbi's words. The Messiah is one of us? Could he possibly have meant one of us monks here at the monastery? If that's the case, which one? Do you suppose he meant the abbot? Yes, if he meant anyone, he probably meant Father Abbot. He has been our leader for more than a generation. On the other hand, he might have meant Brother Thomas. Certainly Brother Thomas is a holy man. Everyone knows that Thomas is a man of light. Certainly he could not have meant Brother Elred! Elred gets crotchety at times. But come to think of it, even though he is a thorn in people's sides, when you look back on it, Elred is virtually always right. Often very right. Maybe the rabbi did mean Brother Elred. But surely not Brother Phillip. Phillip is so passive, a real nobody. But then, almost mysteriously, he has a gift for somehow always being there when you need him. He just magically appears by your side. Maybe Phillip is the Messiah. Of course the rabbi didn't mean me. He couldn't possibly have meant me. I'm just an ordinary person. Yet supposing he did? Suppose I am the Messiah? O God, not me. I couldn't be that much for You, could I?
As they contemplated in this manner, the old monks began to treat each other with extraordinary respect on the off chance that one among them might be the Messiah. And on the off off chance that each monk himself might be the Messiah, they began to treat themselves with extraordinary respect.
Because the forest in which it was situated was beautiful, it so happened that people still occasionally came to visit the monastery to picnic on its tiny lawn, to wander along some of its paths, even now and then to go into the dilapidated chapel to meditate. As they did so, without even being conscious of it, they sensed the aura of extraordinary respect that now began to surround the five old monks and seemed to radiate out from them and permeate the atmosphere of the place. There was something strangely attractive, even compelling, about it. Hardly knowing why, they began to come back to the monastery more frequently to picnic, to play, to pray. They began to bring their friends to show them this special place. And their friends brought their friends.

Then it happened that some of the younger men who came to visit the monastery started to talk more and more with the old monks. After a while one asked if he could join them. Then another. And another. So within a few years the monastery had once again become a thriving order and, thanks to the rabbi's gift, a vibrant center of light and spirituality in the realm.”

No one of us has the golden answer as to how to save a dying world, or the environment, or people divided because of their religious beliefs, or their sexual orientation, or their race. None of us has the secret solution on how to cope with the challenges of our own personal issues, family problems, parish challenges.

Perhaps the most you and I can do is what we are doing on this special night of Christmas Eve, whether in real time in a church, a family gathering, etc., or online reading this blog: we can come together over Torah or Scripture or Koran or Gita, and we can weep together -- over what pains us as well as over what gives delight and joy to our hearts. For those of us who are Christians, we remind ourselves that “the Messiah is one of you”, that Jesus of Nazareth, whom we believe to be the Anointed One of God, calls you and me to share his unique teaching about love with all who will listen. For all of us, Christian or not, we remind ourselves of the need to treat each other and ourselves with extraordinary respect. Imagine how people around us might respond!

My Christian prayer this night is one written by George White:

Watch your step. You are approaching a dangerous
manger. It also serves as a makeshift baby bed.
Beware, for the one you seek did not stay a baby.
Jesus, nursed and cuddled by Mary, later claimed
everyone who does God’s will as his mother.
Jesus, worshipped by shepherds, later challenged
us to seek out not lost sheep, but lost people.
Jesus, given gifts by wise ones who had traveled
from afar, called us to go out of our way to care for
the hungry, the lonely, and the homeless.
Watch your step as you take this Bethlehem baby
into your arms and whisper to him.
You may find him taking you into his arms,
whispering new life into you.
Posted by Harry Allagree at 1:22 AM

Thank you for sharing a beautiful story and a beautiful prayer...the quickest paths to the human heart. Peace be with you.