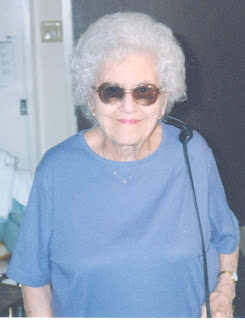 Grace Elinor DeHaven
March 9, 1915 - December 17, 2003
Loving God, we thank you for Grace,
for the years we shared with her,
for the good we saw in her,
for the love we received from her.
We leave her in your care,
confident in your promise of eternal life,
through Jesus Christ our Lord. Amen.
Hard to believe that it's been six years already that Mom's been gone. She lived a lot in her 88 years: much of it struggle and suffering, but mixed in with many occasions of great joy and blessing. The greatest of the latter were her 12 years with my stepfather, Tom. In him she found the love of her life, and his premature death at age 44 left a gigantic hole, not only for her but for all of us.
One of my blessed memories of Mom were her hats! She favored the somewhat tall poofy ones, ones like Queen Elizabeth is wont to wear. All her life Mom knew how to look stylish; she took pride in her appearance, even though she never spent a lot of money on expensive clothes. One of the lessons I learned from her, I think, was how to look neat and presentable without extreme expenditure.
There were countless other, much more important, lessons which Mom taught me. She instilled in me faith, honesty, respect for others, and a fiercely independent spirit. She gave me the gift of belonging to my family, every member of which I love, even though we've been so separated by distance and time through most of my life. As any family, we've had our eccentricities, petty disagreements, failings; but when the chips are down somehow we've always managed to come together to be there for each other.
It's significant to me that Mom lived her final years in a place called Mercy Siena Woods, and that she was buried from Our Lady of Mercy Catholic Church in Dayton, OH. Mom's life was marked by a lot of sadness and fear. I learned only in the 1980's of her frustrated dream as a young woman to have been able to follow in my Aunt Florence's footsteps as a nurse. After my father left us, she was a single working mother with a latchkey child. She'd been raised in the "old school" of Catholicism, which, for good or ill, engendered a good bit of guilt and fear in her. Those who cared for her at the end, particularly the nursing home staff, surely witnessed to her the meaning of mercy, and her funeral Mass of Christian Burial in 2003 was a joyous celebration of the Lord's mercy.
One enduring memory of my mother was her love for the children in our family. I often sat in amazement, watching her interact with them, wondering how she could relate so easily and joyfully, whatever the age of the children. They seemed to delight especially in Mom's hearty laugh and in the security they felt whenever she hugged them, blessedly endowed as she was with an ample bosom, which she often referred to as her "water wings"!
Mom was generous and giving. She seemed to remember every family member's birthday and anniversary with a special care or gift.
If I have one thing I still hold against my mother, it's this: she learned how to drive when she was in her 50's, which terrified me and many in my family! Once back in the 1970's, when my then-wife and I were living in Louisiana, just outside of New Orleans, Mom called to say she was coming to visit us. When I asked if I should pick her up at the airport, she informed me that she was driving herself down, all the way from Dayton. We prayed a lot in the meantime, I assure you! But Mom seem unphased at the prospect of the long drive, which I'd done several times myself. The thing that really galled me was that she made better time driving there than I'd ever done!
Just before Mom's funeral, a lyric from the song His Eye Is On the Sparrow had been playing over and over in my mind:
"I sing because I'm happy, I sing because I'm free;
His eye is on the sparrow, and He watches over me."
Our loving God knows and cares for each of God's sparrows. But Scripture reminds us that God's love and compassion for each human being goes far beyond even that. You and I need only reflect on our own personal and family histories to know how true that is. Another name for it is God's forgiveness, God's mercy.
Each anniversary of her death brings a welcome reassurance that Mom continues to live on happily, wrapped in God's abundant mercy.
Posted by Harry Allagree at 1:44 PM