The Venerable Lover of Tamanrasset 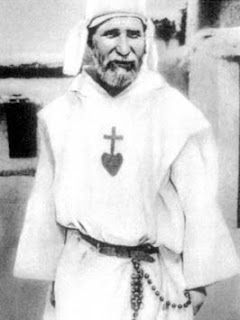 "I rent by the day, not by the month." That's what Charles Eugène de Foucauld (1858-1916) , as a young French cavalry officer, used to say to his mistresses during the time in his younger life when he indulged himself in pleasure and dissipation. In 1883, on an expedition to Morocco, he became fascinated with north Africa and its ways. But God had other uses for Charles' passion and love. In 1887 de Foucauld recommitted himself in the Roman Catholic Church to the faith of his infancy. Three years later, having seen the holy land where Jesus was born, lived and died, Charles entered a Trappist monastery. After living that rigorous life for seven years, he desired even more austerity, and left the Trappists to become a servant to the Poor Clares in Jerusalem and Nazareth.
In 1901 Charles was ordained a priest and decided to return to Algeria to live a hermit's life at Tamanrasset. His intention was never to proselytize the native people; he learned their language and, with patience and loving concern, became accepted and eventually loved by the locals. Fifteen years after his arrival, on December 1, 1916, in the midst of local religious wars, Charles de Foucauld was assassinated.
Though neither men nor women ever joined him in his form of life, Charles authored Rules for both brothers and sisters. Inspired by his Rule for sisters, the Little Sisters of the Sacred Heart were founded in 1933. Père René Voillaume and a small band of men adopted a Rule based on the one Charles had created; in 1945 they became the Little Brothers of Jesus.
Charles de Foucauld wrote: "...You must cross the 'desert' and dwell in it to receive the grace of God. It is here one drives out everything that is not God. The soul needs to enter into this silence, this recollection, this forgetfulness of all created things by which God establishes his rule in it and forms within it the life of the spirit, the life of intimacy with God, the conversation of the soul with God in faith, hope and love.
Later the soul will bring forth fruit exactly in the measure in which the inner life is developed in it. If there is no inner life, no fruit will come forth; it is like a spring that would give out sanctity to others but cannot, having none to give; one can only give that which one has. It is in solitude, in that lonely life alone with God, in profound recollection of soul, in forgetfulness of all created things, that God gives himself to the soul that thus gives itself whole and entire to him..." (Letter to a Trappist monk preparing for ordination)
Posted by Harry Allagree at 3:51 PM