"God Is Driving the Bus!" 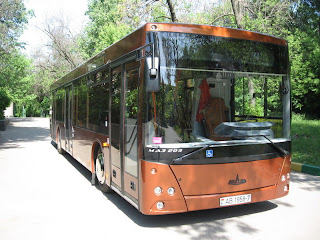 Timothy J. Mulder, Associate Professor of Worship and Director of the Chapel at New Brunswick Theological Seminary, in commenting on the liturgical readings for the Second Sunday of Advent, in particular the reading from the prophet Malachi [3:1-4], notes that the lectionary stops short of the real punch line, as is so often the case! Verses 5-6 go on to speak about God’s refining justice: “...Then I will draw near to you for judgement; I will be swift to bear witness against the sorcerers; the adulterers; those who oppress the hired workers in their wages, the widow and the orphan; those who thrust aside the alien [read immigrants!], and do not fear me, says the Lord of hosts. For I the Lord do not change...you have turned aside from my statutes and have not kept them. Return to me, and I will return to you...”

Mulder notes that “God demands our all, our very best...” but that, for most of us, our modus operandi is to skate by, giving as little as we can, just as the folks in Malachi’s experience had done. Like them we often fall victim to spiritual depression, become skeptical, blame God for our ills, and chuck the whole shebang! The only way out is to suck it up and willingly give God our best, which takes a whole lot of humility and recognition or our human weakness.

Then Mulder says something which made me sit up and take notice: “...Is is possible that our best may actually be what we think is our worst? When we are at our lowest point, when we think that everything has gone wrong or been taken from us, or that we’ve messed everything up, it is precisely then that we perceive the world around us more clearly and are capable of giving what is true. The season of Advent is full of reversals: lowly things and people are exalted, while the mighty are brought low. God continues to surprise by using or doing the unexpected. Sometimes this notion of purifying and refining means that we should be especially aware of looking for God in the midst of our very worst times. For out of them may come the very best...”

Some quotes from T. S. Eliot’s East Coker came to mind:
“The only wisdom we can hope to acquire
Is the wisdom of humility: humility is endless.”

“I said to my soul, be still, and let the dark come upon you
Which shall be the darkness of God.”

The darkness of the divine is the place of our Advent waiting. In God’s economy we arrive, possess, acquire, know, and are only by the way of negation. It is the “ascent of Mt. Carmel” as described by St. John of the Cross: “nada - nada - nada”. And God calls us not necessarily to be successful, but only to be faithful.

I write this at a time which may not be my worst or lowest, but it’s right down there close to the bottom. Two weeks ago my son, who has had a long ten-year battle with autoimmune brainstem encephalitis, had a minor relapse which landed him in the hospital for five days, over Thanksgiving and his 35th birthday! (The hospital turkey, trimmings, and pumpkin pie wasn’t all that bad!) Last Monday I brought him to stay with me for a week or so of rest and recuperation. All my old fears about what could or would happen and about getting the medications right came back with exhausting fury, not to mention the sheer physical exertions of assembling and disassembling the wheel chair, driving hours to doctor’s appointments, etc. I also don’t do well, especially as I get older, with schedule disruptions. But...this is the reality that needs to be faced and dealt with, with determination, patience, and compassion. As Andrew frequently reminds me: “God is driving the bus!” I only wish God would give at least a hint as to where we’re headed!

With that as a background, I began the season of Advent. And in this reality I continue to live into the season. So I sought, with great frustration and scatteredness this week, to determine what the Scriptures for this Second Sunday might be telling me/us.

The Malachi reading is more than just a passage from which Handel borrowed a few pithy verses for his Messiah. God refers to “my messenger”, [Hebrew: mal + aki] who is being sent to get the priests and people who’ve returned from exile back on track. His task is to get people to “present offerings to the Lord in righteousness”. As I see it, that means that we’re to: 1) Do it right; and 2) Do it for the right reason. And in this process, the question might arise: who are my messengers and/or prophets in enabling me to “return to the Lord” so that the Lord will return the favor??

Paul’s passage from the letter to the Philippians [1:3-11] is a warm, loving message to people he obviously loved, in whom he was invested, and for whom he wished a deep relationship in Christ. For me, it is an Advent call to let love overflow -- not just be there, sorta -- but to abound: through prayer, sharing, spiritual insight, truthful living. The question here might be: how is the “tender compassion” of our God breaking into your life and mine??

In the Gospel and in Canticle 16, used as the Psalm, the emphasis seems to be on repentance and preparing for God’s return to us. Luke spells out with precise detail the venue and time into which “the word of God came to John” the Precursor. It was in c. 28-29 C.E. Tiberius was the Roman Emperor holding sway over Palestine. The imperial rule offered “homeland security” by forcing people’s loyalty to Rome in demanding two things: 1) tribute/taxes/money; and 2) suppression of all dissent and disagreement. In other words, the status quo in order to benefit the rich and the powerful...like today. And into that environment came the wild man, John: skin-wearing, locust-eating, ranting against the establishment, both civil and religious. He proclaimed a baptism and message validated by the great prophet, Isaiah: one of “repentance for the forgiveness of sins”. And he carried out his ministry within God’s territory: the wilderness, the place where, of necessity, one can only afford to be faithful and truthful and humble.

A Carthusian hermit writes: “...Humble and detached, go into the desert. For God, awaiting you there, you bring nothing worth having, except your entire availability...[God] is calling you to live on friendly terms with [God], to nothing else...You must be content to lose yourself entirely. If you secretly desire to be or to become ‘somebody’, you are doomed to failure. The desert is pitiless; it infallibly rejects all self-seekers...” So, the question we might pose to ourselves here is: for whom has God called you and me to prepare the way to see Jesus?? Even at our worst; even at our lowest point; even when everything is going wrong around us; even when we repeatedly mess up??

The bus is leaving for the continuing Advent journey through the next three weeks.
Want to climb aboard??
After all, “God is driving the bus!”