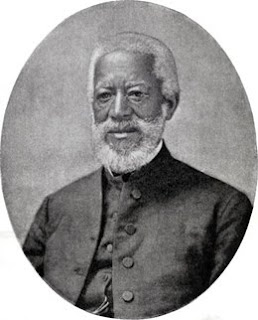 When I read the life of Alexander Crummell, I confess that I, as a white person of privilege, feel quite ashamed of how my country and my Church treated this man, father, and priest, simply because the color of the skin with which God created him was black. Perhaps the most despicable expression of this was on the occasion of Crummell's seeking to come into the Diocese of Philadelphia, under Bishop Henry Onderdonk. He'd come with the blessing and a letter of introduction from Bishop Griswold of Boston. Onderdonk said to Crummell: "I will receive you into this diocese on one condition: No Negro priest can sit in my church convention and no Negro parish must ask for any representation there." Rightfully unwilling to accept second-hand status, Crummell is said to have paused for a moment, then resolutely replied: "I will never enter your diocese on such terms." Time after time, decade after decade in the United States, right down to the present, this sort of glaring prejudice and scapegoating has been repeated. You need only read the true history of our country to realize why and how deeply this ungodly attitude has been ingrained in our national DNA, so to speak!

Alexander Crummell was born to a former slave, Boston Crummell, and a freeborn mother, Charity Hicks, in March, 1819. Crummell himself tells us that his paternal grandfather was an ethnic Temne, born in Sierra Leone, and was captured into slavery when he was around 13 years old. Alexander's parents were active abolitionists, and the first African American newspaper, Freedom’s Journal, was published within their home. His father, Boston, also instilled in his son a sense of unity with black people still living in Africa. All of this had a profound effect in shaping Crummell’s values, beliefs, and actions throughout the rest of his life. Even as a boy in New York, Crummell worked for the American Anti-Slavery Society.

Alexander began his formal education in the African Free School No. 2, as well as at home with private tutors. After attending and graduating from Canal Street High School, at age 12 Crummell, along with his friend Henry Highland Garnet, attended interracial Noyes Academy in New Hampshire. On the journey there, he was banned from a cabin on the steamboat and forced to stay on the deck. On the next leg of the trip, he was forced to sit atop the stagecoach during the day and night. In his mid-freshman year at Noyes, the locals voted to abolish the Academy, literally dragging the school building into the swamp.

Crummell returned to New York where he enrolled in Oneida Institute, also an interracial school, in upstate New York. While there, Crummell began to discern a call to become an Episcopal priest, and pursued it with the same enthusiasm with which he'd pursued the rest of his education. Once again he hit the race barrier when he was denied admission to the General Theological Seminary, solely because of his race. Nevertheless, Alexander Crummell persevered. With the help of several clergymen sympathetic to his position, he was accepted as a candidate in the join Diocese of Massachusetts/
Rhode Island. He studied under a tutor for a year and took some studies at Yale Theological Seminary where, despite having the same advantages as white students, he wasn't permitted to have his name recorded on the college register! In 1842 he was ordained a deacon by Bishop Alexander Viets Griswold, and as a priest, in 1844, by Bishop Alfred Lee, first bishop of Delaware and 40 years later, the Presiding Bishop of the Episcopal Church. Alexander struggled as the pastor of the Church of the Messiah in New York experiencing severe poverty, hunger, ambivalent attitudes, low finances (he himself took no pay!) and low attendance. He married during this time, and he and his wife suffered the loss of their first child to malnutrition.

In 1847, Crummell traveled to England to raise money for his congregation at the Church of the Messiah. While there, Crummell preached, spoke about abolitionism in the United States, and raised some money. By the next year Crummell had become so discouraged that he and his wife went back to England. He was welcomed by such British notables as William Wilberforce and Thomas Macaulay, among others, who became his patrons. At length he was invited to enter Cambridge University, which he attended from 1849 to 1853, at Queens' College. Although he had to take his finals twice to receive his degree, he became the first man of color ever to graduate from either Cambridge or Oxford.

Personal sadness once again visited Alexander and his family, this time in England, when his firstborn son, one of four, accidentally choked on a button and died.

During his time at the Cambridge, Crummell continued to travel around Britain and speak out about slavery and the plight of black people. He formulated his most central belief for the advancement of the African race, Pan-Africanism, during this time. Crummell believed that in order to achieve their potential, the African race as a whole, including those in the Americas, the West Indies, and Africa, needed to unify under one banner. Racial solidarity was, for him, the solution to slavery, discrimination, and continued attacks on black people. To that end, he decided to move to Liberia in Africa to spread his message.

Arriving in 1853, at the point in that country's history when American Liberians had begun to govern, Crummell began his ministry as a missionary of the American Episcopal Church, with the stated aim of converting the native people. Though previously opposed to colonization, experiences in Liberia changed his mind and he became convinced of its benefits. Crummell wove colonization into his Pan-African ideology, preaching that "enlightened," or Christianized, Africans in the United States and in the West Indies had an obligation to return to Africa, where they could help civilize and Christianize the continent. After a sufficient number of native Africans had been converted, they, in turn, would undertake converting the rest of the population, while those from America and the West Indies would continue to educate the people and run a republican government. Alexander Crummell’s grand scheme, however, never came to fruition. Interest in colonization waned, "enlightened" black people failed to perform the duties laid out for them. Crummell did, however, successfully serve as a pastor and professor in Liberia, though he was never able to set up the government and society which he had envisioned. In 1873, he returned to the United States.

Back in the United States, Crummell became a "missionary at large among the colored people", and served for two years as pastor of an integrated Episcopal mission, St. Mary’s. In 1880 he founded and served as rector of St. Luke's, Washington, for 15 years. Despite prior frustrations, he never stopped working for the racial solidarity he had advocated for so long. In the 1880's he organized a national black convocation which effectively blocked the efforts of Southern Episcopal Bishops to set up a segregated missionary district for black congregations. It was the forerunner of today's Union of Black Episcopalians. He encouraged the establishment of new black parishes in the eastern U.S. Throughout his life, Crummell continued to work for black nationalism, self-help, and separate economic development.

Retiring from active ministry in 1894, he taught at Howard University for two years. He spent the last years of his life gathering black artists and educators to help establish the American Negro Academy in Washington, which opened in 1897. Interest in the Academy waned by the 1920's, but it was revived some forty year later, in 1969, in New York City as a non-profit organization, the Black Academy of Arts and Letters.

Alexander Crummell died in Red Bank, NJ, in 1898. Though most of his work never produced the intended results, he was an important voice within the abolition movement and a vocal leader of the Pan-African ideology. His contributions to the academic world, via his sermons and written works, leave the impression of a well-educated, well-spoken, and well-written black man. Crummell  exerted significant influence on other great African Americans: Marcus Garvey, Paul Laurence Dunbar, and W. E. B. Du Bois. Du Bois, in his 1903 book, The Souls of Black Folk, memorialized Alexander Crummell: "I can see his face still, dark and heavy-lined beneath his snowy hair; lighting and shading, now with inspiration for the future, now in innocent pain at some human wickedness, now with sorrow at some hard memory of the past.

The more I met Alexander Crummell, the more I felt how much the world was losing which knew him so little..."
Posted by Harry Allagree at 8:31 PM

Well said by a noble American!