Holy Mystics: A Hermit, A Canon, & A Wacky Lady

Generous God, we give you thanks for the lives and work of Richard Rolle,
Walter Hilton, and Margery Kempe, hermits and mystics, who, passing through
the cloud of unknowing, beheld your glory. Help us, after their examples,
to see you more clearly and love you more dearly, in the Name of Jesus Christ
our Savior. Amen.

Richard Rolle (c. 1300-1349) is the earliest of the great 14th century English mystics. Though the facts about his life are uncertain, it seems that he was born in Yorkshire and studied at Oxford, though he seems not to have earned a degree there. Nevertheless, he was widely read and at home with Scholastic theology. He became recognized as an accomplished poet. His writing was geared, not just to the cloistered or the learned elite, but to anyone who was interested in what he had to say.

At about the age of 19 he became and dressed as a hermit, finally settling at Hampole, near a Cistercian nunnery. To some of his contemporaries, Rolle seemed somewhat unusual, even a bit mad. According to his biographer, one day, as he was "sitting...in a church, rapt in meditation,...he felt in his breasta strange and pleasant heat, as of a real sensible fire, so that he kept feeling of his breast to see if the heat was caused by some exterior cause. He often heard heavenly music..." Heat, song and sweetness characterized his mystical experiences, of which he wrote, for example, in one of his best known works,  Incendium Amoris (The Fire of Love). 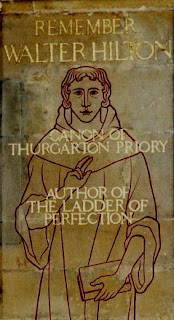 (Artist: Tom Errington, an accredited NADFAS lecturer
and Adviser on Art, Art History & Stained Glass to the
Diocese of Southwell & Nottingham & Stained Glass
Adviser to the Diocese of Coventry)

As with Richard Rolle, little is known of Walter Hilton's life. He was probably born sometime between 1340-45. Having attended Cambridge University, he is first recorded as a bachelor of law, attached to the diocesan court of Ely in 1371, and again in 1375. Some manuscripts describe Hilton as a commensor or inceptor decretorum = one who has completed the studies and examinations entitling him to become a Master of Canon Law, but without undertaking the regency that would have given him the latter title. Some time, probably before 1386, he declined a legal and administrative career available to him in the court of Bishop Thomas Arundel of Ely, and retired from the world as a hermit. He eventually decided that he was not called to the eremitic life, but to a religious order. He apparently joined the St. Peter's Priory at Thurgarton, in Nottinghamsire, some time after 1375, and died there as an Augustinian Canon Regular on March 24, 1396.

His spiritual writings were very influential in 15th century England. His major work is The Scale of Perfection, in two books, written for the spiritual guidance of an unnamed anchoress. Other notable works of Hilton are Epistola Aurea (The Golden Letter, c. 1375); De Utilitate et Prerogativis Religionis (Of the Profit and Prerogatives of Religious Life); De Imagine Peccati (Of the Image of Sin); and an English work, On Mixed Life, written for a devout layman regarding wealth and household responsibility. Hilton advises the man not to relinquish his active life in order to become a contemplative, but rather to mix the two. The latter four works were probably written in the 1380's.

Hilton also wrote other Latin letters of spiritual guidance, a scholastic quodlibet on the appropriateness of reverence shown to images, e.g. crucifixes (a practice criticised by the Lollards), a short tract in English, Of Angels' Song, and commentaries on Psalm texts. He also translated Eight Chapters on Perfection from a Latin text said to have been left at Cambridge by an Aragonese Franciscan who had studied there in the mid-1380s.

Even though she herself probably was unable to read or write, Margery Kempe (c. 1373–after 1438) is known for her dictated work, The Book of Margery Kempe, considered by some to be the first autobiography in the English language. Margery was the daughter of John Brunham, a Member of Parliament, and five times the mayor of Bishop's Lynn (now King's Lynn). She married John Kempe, son of a prosperous merchant, c. 1393, and had 14 children by him.

After the birth of her first child, Margery fell ill and was overcome with fear for her life. After a failed confession that resulted in a bout of self-described "madness," Margery Kempe claimed to have had a vision, calling her to put aside the "vanities" of this world. Having railed against her family and friends for many weeks, Kempe says that Jesus appeared in a vision at her bedside, asking her: "Daughter, why have you forsaken Me, when I never forsook you?"

From then on, Margery undertook two failed domestic home-based businesses, a brewery and a grain mill, not uncommon enterprises for medieval women. Though she tried to be more devout after her vision, she was tempted by sexual pleasures and social jealousy for some years. Turning away, at length, from what she interpreted as the effect of worldly pride, Kempe devoted herself completely to the spiritual calling which her earlier vision suggested. In order to live committed to God, Margery and her husband agreed to live a celibate life together.

She then began making pilgrimages. In her Book Kempe herself describes a visit she made to St. Julian's Church in Norwich, c. 1410: "Then she [i.e., Margery] was bidden by our Lord to go to an anchoress in the same city, named Dame Jelyan...for the anchoress was expert in such things and good counsel could give..." Margery, in fact, describes how she and Julian discussed Margery's visions as to their orthodoxy, deciding that because they led to charity, they were of the Holy Spirit. Kempe also journeyed to other various holy sites: to Rome, where she stayed at the Venerable English College in 1416; Jerusalem; Santiago de Compostella; and a journey in the 1430's to Norway and the Holy Roman Empire, where she visited the Holy Blood of Wilsnack.

The stories surrounding her travels are what eventually comprised much of her Book, although a final section includes a series of prayers. The spiritual focus of her Book is on the mystical conversations she shared with Jesus for more than forty years, though another key focus was also on her persecution by civil and religious leaders.

She describes having mystical experiences which were particularly spectacular, and there is wide divergence of opinion regarding whether or not she was a true mystic. Some feel that she was "a woman whose intelligence was mediocre but whose strong will surrendered...to her Divine Lord...who sought by her words and example to spread the Kingdom of Christ.." (E. I. Watkin, Poets and Mystics) Others judge her to be a "hysterical young woman [who] calls herself a poor creature...I am afraid she was. She is obviously proud of the 'boisterous' roarings and sobbings which made her a nuisance to her neighbours. She never quite rings true..." (W. R. Inge, Mysticism in Religion)

Though Margery is often depicted as an "oddity" or even a "madwoman," recent scholarship suggests that she wasn't, perhaps, as odd as she appears. Her Book is actualy a carefully-constructed spiritual and social commentary. One scholar notes that at some time in the 1420s, a man took it upon himself to record the life of this extraordinary Norfolk woman. Although he died before finishing the task, it was continued by another scribe, then published as The Book of Margery Kempe. About the time Margery began dictating her book, John, her husband, had a fatal fall and Margery returned to Lynn to take care of him. Both he and her son died soon after.

Part of Margery Kempe's significance lies in the autobiographical nature of her book. It's probably the best insight we have about a middle-class female's experience in the Middle Ages. There's no doubt that Margery Kempe is unique and unusual among the more traditional holy women and men of her age. Kempe's Book is also significant as a record of the tension in late medieval England between institutional orthodoxy and increasingly public modes of religious dissent, especially those of the Lollards. Throughout her spiritual career, Kempe's adherence to the teachings of the institutional Church was challenged by both church and civil authorities. Kempe was even tried several times for such "illegal" acts as allegedly teaching and preaching publicly on Scripture and faith, and wearing white clothes, interpreted as hypocrisy on the part of a married woman. Nevertheless, she stood her ground and proved her orthodoxy.

The Book of Margery Kempe is known to have been completed in 1438. That same year, a "Margeria" Kempe, possibly Margery, is recorded as having been admitted to the Trinity Guild of Lynn. The last record of her is in the city of Lynn in 1438, and it is not positively known when or where she died.
Posted by Harry Allagree at 7:47 PM