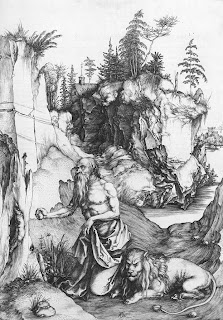 "A militant champion of orthodoxy, an indefatigable worker, and a stylist of rare gifts, Jerome was seldom pleasant, but at least he was never dull." Such is the assessment of the Episcopal Church's newly published Holy Women, Holy Men: Celebrating the Saints (Church Publishing, 2010) One Renaissance Pope, seeing a portrait of Jerome in the desert, in sackcloth, and holding a stone in his hand, with which Jerome allegedly used to beat his breast in penance, is said to have commented: "It's well that Jerome was holding that stone, for without it he could hardly be considered a saint!"

Sophronius Eusebius Hieronymus (c. 342-347 to 420) was born in Strido, near Aquileia, in Dalmatia, in the upper northeastern corner of Italy. As Fr. John Julian, OJN notes in his Stars In A Dark World, Jerome was part of astounding century of saints, from 350-450, which included SS. Jerome, Ambrose, Augustine of Hippo, and the great Cappadocian Fathers Basil, Gregory Nazianzus, and Gregory of Nyssa, all of whom knew one another! Jerome corresponded with Augustine, with whom he made up a sort of mutual admiration society! Gregory Nazianzus was later his teacher.

In art Jerome is often depicted either in a cardinal's robe or with a cardinal's hat, items not even in vogue until about four centuries later. A lion is also often shown lying next to him, remnant of a fable that Jerome pulled a thorn from a lion's foot and kept him as a house pet.

Jerome was an über-brainiac and scholar, to say the least! He studied the classics in Rome, learned Latin and Greek, and later Hebrew, to the extent that he could, under a fellow-monk of Jewish heritage in Chalcis and under Bar Ananias in Bethlehem. While a young man in Rome, Pope Liberius baptized him. Jerome and his buddies often spent Sundays visiting the tombs of the apostles and martyrs.

After three years in Rome he travelled to Gaul and ended up in Trier, where he made a decision to commit his life to God. He and a group of friends returned to Dalmatia where they lived as a semi-monastic community. Jerome, however, was "difficult" to live with; he had his beliefs and convictions and defended them uncompromisingly. The group was dissolved and in 374 Jerome and three others went their way, this time east, to Antioch.

Eventually, because of his draw toward the ascetic and eremitic life, Jerome withdrew to the wilderness of Chalcis, southeast of Antioch, where he stayed for four years. About his Hebrew studies there, under the monk mentioned above, Jerome, writing some 30 years later, says: "...When my soul was on fire with wicked thoughts, as a last resort, I became a pupil to a monk who had been a Jew, in order to learn the Hebrew alphabet. From the judicious precepts of Quintilian, the rich and fluent eloquence of Cicero, the graver style of Fronto, and the smoothness of Pliny, I turned to this language of hissing and broken-winded words. What labor it cost me, what difficulties I went through, how often I despaired and abandoned it and began again to learn, both I, who felt the burden, and they who lived with me, can bear witness. I thank our Lord that I now gather such sweet fruit from the bitter sowing of those studies."

Paulinus, Bishop of Chalcis, convinced Jerome to be ordained a priest in 378, though Jerome was reluctant and even protested that his vocation was to be a monk. He consented at length, but he never engaged in priestly ministry nor, surprisingly, did he celebrate the Eucharist during his lifetime. In 379, continuing studies in Hebrew and Greek, he moved to Constantinople to study Scripture for three years under Gregory Nazianzus. Afterwards, travelling as part of a council delegation to Rome, Pope Damasus tagged him for the job of secretary to the Pope, as well as for a major project: translating the Gospels and the Psalter into Latin from Hebrew and Greek. Jerome was humble about his work. He freely admitted ignorance, even embarrassment, when warranted, and revised some of his translations, making corrections and additions. On the other hand, he also pointed out that a translation's accuracy depended greatly on the source text's reliability. It wasn't unusual for copyists to inadvertently make errors, which would be further compounded and passed on through the centuries. Jerome once observed, “I am not so stupid as to think that any of the Lord’s words either need correcting or are not divinely inspired, but the Latin manuscripts of the Scriptures are proved faulty by the variations which are found in all of them.”

In his spare time (!), Jerome devoted himself as spiritual mentor to many noble Roman women who, at this time, felt drawn to monastic life, among them Paula, and Eustochium, to both of whom he later dedicated Scriptural treatises. After the death of his patron, Pope Damasus, many people whom Jerome had offended by his judgmentalism, harshness, and sarcasm, began to gossip about and slander him. When Jerome decided to go east again, this time to Bethlehem, Paula, a wealthy widow, followed, and even built a monastery for Jerome and his companions. Here he again took up Hebrew, and the translation into Latin of nearly all of the Hebrew Old Testament. This, plus his previous work on the New Testament and the Psalms, spanned some 55 years of labor! It became known as the versio vulgata, or Vulgate, i.e., the "commonly used translation". Aside from his monumental accomplishment, the Vulgate, Jerome also distinguished himself in Scriptural interpretation, theological debate, history, opposing heresies, and correspondence. Some 120 of his letters have survived.

Jerome's last years were full of turmoil and suffering. St. Paula died in 404, to Jerome's great sadness. A few years later the Huns sacked Rome. In 418 Pelagian enemies of Jerome attacked his monks and nuns, and burned the monastery and convent to the ground. Frail and exhausted, Jerome died in Bethlehem in 420. At first his body was buried in a chapel beneath the Church of the Nativity, and many years later was transferred to Santa Maria Maggiore in Rome.


Prayer for Christ's Mercy
by St. Jerome
O Lord, show your mercy to me and gladden my heart.
I am like the man on the way to Jericho who was overtaken by
robbers, wounded and left for dead. O Good Samaritan, come to my aid.
I am like the sheep that went astray. O Good Shepherd, seek me out
and bring me home in accord with your will. Let me dwell
in your house all the days of my life and praise you for ever and ever
with those who are there.
Posted by Harry Allagree at 12:09 PM