Dialogue Across The Chasm 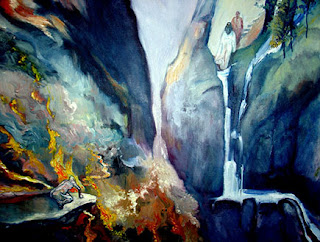 In Luke’s Gospel passage (16:19-31) there’s a rich man and a poor man. The rich man isn’t named, though he’s often referred to in tradition as Dives = Latin for rich [person]. Luke describes him as “dressed in purple”, so he may have been either a high-ranking official or a member of royalty. The Romans had standards regarding who could wear purple and how much purple could be worn: a fact possibly consoling for non-Roman Anglican and Episcopal bishops -- or not! Dives’ estate was undoubtedly a “gated” community, as Luke intimates. The rich man dressed “in fine linen and...feasted sumptuously” on gourmet delicacies: every day, says Luke!

Then there was the “poor man”, Lazarus, who lay at Dives’ gate: on the outside, of course. Lazarus is Lazar in Aramaic, from the Hebrew Eleazar = God has helped, a rather common name. Luke says that, in addition to being poor and laying at Dives’ gate, Lazarus bore sores on his body which, as Luke perceptively observes, “even the dogs would come and lick”. If that weren’t enough, poor Lazarus was, perhaps, starving because he longed just for the crumbs that fell from Dives’ table. At a feast, apparently an everyday occurrence at Dives’ home, it was common etiquette to use bread to wipe grease from one’s hands, then chuck it under the table: understandable, because the rich man’s cleaning crew of slaves would’ve been expected to move in and tidy up after guests had left the table. Luke doesn’t tell us whether Lazarus actually ever got any of the leftovers, only that he was craving them.

Luke then simply states: “The poor man died…”, and leaves us wondering how and why. Perhaps of starvation...even just a few steps from Dives’ table? Perhaps from overexposure on a cold night, while Dives slept on his custom-made linen?

Luke also says: “The rich man...died and was buried.”, leaving us, once again, to wonder about the cause. Given his propensity to eat “sumptuously”, maybe the rich man’s cholesterol and high blood pressure caught up with him, and it was more than his heart could take. In which case, the very food which he could have shared with hungry Lazarus in the end “did him in”. We’re left to wonder if Lazarus was properly buried, or just thrown into a pauper’s grave. Dives was, of course, buried, probably after a large, ostentatious funeral, presumably in the rich purple and fine linen to which he was accustomed.

In the next scene, things get interesting and Luke gets to the heart of his purpose for relating this story. Lazarus unexpectedly appears, in the words of an old black Gospel spiritual, “in the bosom of Abraham”, much to the astonishment of Dives who’s “being tormented”, Luke says, “in Hades”. Judaism saw sheol or Hades as the place of silence where all humans went after death. Luke seems to indicate that there was a “cool” side and a “hot” side, insurmountably separate from each other. “Abraham’s bosom” became a common designation for a place of comfort, the highest state of glory and blessedness. It also reminded people of the Messianic banquet, where God’s guest is given the place of honor at the right hand, the hand of power. “Hades”, on the other hand was the underworld, the place of darkness, the abode of the dead, “the end”, the final stop.

To many Jews this story would’ve been a bit shocking, for it was common belief that blessings and wealth in this life were a sign of God’s favor. Whereas illness, poverty, and tragedy happened only to the those with whom God was displeased. (Here the Book of Job comes to mind.) So, how could a poor beggar end up in Abraham’s bosom?

You and I, of course, need not wonder why Dives ended up where he did. The rich man’s sin, so far as we know, wasn’t that he physically mistreated Lazarus, or spit on him, or actually had anything at all to do with him. Dives‘ sin was much greater. Not only did he not have any gratitude for this fellow human being, or probably anyone else: his sin was that he didn’t even care about Lazarus. He was indifferent. He ignored a fellow human being’s basic needs, when he, out of his overabundance, probably taken for granted, could easily have addressed those needs.

As the tables are turned now, Dives calls out to Abraham, rather presumptuously according to Luke, asking him to send the beggar over “to dip the tip of his finger in water and cool my tongue”.
Abraham reminds Dives that there’s an unbreachable barrier, a chasm between him and Lazarus, similar to the one he’d set up to cut Lazarus out of his circle of concern in life. In death, the rich man is now the one excluded, cut off forever, alone, suffering. No one can reach him now, not even the circle of his own family. He’s eternally stuck in his total ingratitude, indifference, selfishness: which is a fair description of what we call hell.

Jeanne Stevenson-Moessner Associate Professor of Pastoral Theology and Christian Formation at the University of Dubuque Theological Seminary, in Iowa, and editor of two pioneering books on pastoral care, offers a perceptive comment on what follows. She says: “The rich man had hoped to command Lazarus as servant to run back to his mansion and warn his five brothers. Alas, the wealth that had afforded him such power to command people on earth survived neither death nor the flames of hell. Sharon Ringe, in her Luke commentary, elucidates this concern for the rich man's five brothers: ‘The biological family, and not a wider or more inclusive community, continues to function as his principal, (even his only) point of reference, security, and concern.’" In other words, even in Hades, Dives doesn’t “get it”.

The sins of the fathers are often visited on their children. Perhaps indifference and ingratitude for the wider community ran in the family of Dives, or at least was passed on. Abraham reminds the rich man that the brothers have the Scriptures to guide them: “Moses and the prophets: they should listen to them…” But if only someone goes to them from the dead, says Dives, then surely they’ll repent.

In other words, signs and wonders! Jesus had encountered this warped mentality throughout his ministry: Matthew 12: “Teacher, we want to see a miraculous sign from you…” John 2, 4, & 6: “What miraculous sign can you show us to prove your authority?…” “Unless you people see signs and wonders you will never believe…” “What miraculous sign, then, will you give that we may see it and believe you?…” And you and I still run into it today: the need for something big, spectacular, life-changing, in order to bring people into the Church.

Luke’s Abraham ends the passage with the words: “If they do not listen to [the Scriptures], neither will they be convinced even if someone rises from the dead.” These very Scriptures today encourage us, in the words of the conclusion of the second reading (1 Timothy 6:6-19) to “take hold of the life which is life indeed.” The Word of God spells out for us, in many places, how to get from indifference and ingratitude, to caring, to sharing, and to community.

Normally, I think most folks don’t do too bad with some of corporal works of mercy: feeding the hungry, clothing the needy, visiting the sick, comforting those who lose loved ones. But there are also the spiritual works of mercy, and you and I might ask ourselves “When did I last…”
- take time with someone who expressed doubt in their faith?
- try to comfort someone in psychological or spiritual pain?
- patiently bear criticism or being “blown off” by another person, without reacting?
- forgive a long-standing grievance?
The author of 1 Timothy reminds us: “...be rich in good works, generous, and ready to share, thus storing up...the treasure of a good foundation for the future…”

Harold Ivan Smith leaves us with these words:

Even a boxer is guaranteed
someone
to stand in his corner
between rounds of brutal blows
Someone to care for his needs
before the bell would summon
to yet another round.
How many pilgrims
have struggled to their corner
only to be alone?
Are we not to step between the ropes
to wipe a forehead or
to offer a word of encouragement?
To risk the stain of sweat
the sting of blood
the despair of agony?
Posted by Harry Allagree at 1:47 PM