The Grouch Who Became A Saint 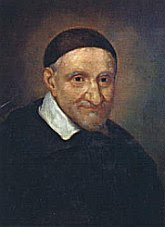 Vincent de Paul once described himself as "of a bilious temperament and very subject to anger." He admitted that without the grace of God he would've been "in temper hard and repellent, rough and crabbed." That restored a bit of hope in me when I read it, for that is something of a description of my temperament at a past point in my life. Ask some of my former parishioners, or my former wife! I deeply regret my failings in that regard, but I also thank God that in later years I've been able to mellow and change. Woodene Koenig-Bricker, in her book 365 Saints, observes: "Although grumpiness may be part of your natural tendencies, more often it's the result of self-neglect and overwork..." Amen: been there, done that!

In the 17th century, God raised up Vincent de Paul and Louise de Marillac to serve the poor. They were mystics in action, who had fallen in love with God and who looked upon the world with eyes of compassion for the suffering, the poor, the destitute, the downtrodden, the victims of violence and injustice.

Born in either 1576 or 1581 of peasant stock at Pouy, in southwest France, near Dax in Gascony, to Jean de Paul and Bertrande de Moras, Vincent was one of four boys and two girls. Intellectually sharp, his father sent him to be educated by the Cordelier Brothers, a stricter branch of the Franciscans, in Dax. After four years, a lawyer hired Vincent as tutor for his children, thus covering his education expenses. He continued studies at the University of Saragossa in Spain, then returned to France to study at the University of Toulouse. He was ordained a priest c. 1600, at the age of 24, but remained another four years at Toulouse, earing a doctorate in theology. After returning to Toulouse, he was called to Marseille to legally recover a small legacy left for him by an old woman of that city. In 1605, while sailing back from Marseille to Narbonne, the ship was captured by Barbary pirates, at that time a menace to all Mediterranean shipping (not unlike the current piracy prevalent in the waters around Somalia). His captors brought him and others to Tunis in Africa, where he was sold as a slave.  His master, a fisherman, resold him to an aged Muslim, a humane man who had spent 50 years in search of the "philosopher's stone". The Muslim often lectured Vincent on alchemy, the secrets of his science, and on Islam, to which he hoped Vincent would convert.

The young priest remained strong in his Catholic faith until the old man died, after which Vincent became property of the master's nephew. The nephew soon sold Vincent to a Frenchman, a native of Nice and a fallen-way Christian, who had embraced Islam.  The new master had three wives, one of whom was a Turkish woman.  The Lives of the Saints, edited by Fr. Joseph Vann, OFM, relates that: "She often wandered into the field where the new Christian slave was at work, and out of idle curiosity would ask him to sing songs in praise of his God. With tears running down his cheeks Vincent would obediently sing certain Psalms [among them, Psalm 137, "By the waters of Babylon..."]...The Turkish woman now began to reproach her husband for abandoning his religion, and kept on until, without herself accepting the faith, she made him return to it. He repented of his apostasy, and he and Vincent made their escape from Africa together..." in 1607. No mention as to why the master felt compelled to escape, nor whether the three wives accompanied him. Of course, it's entirely possible that, for whatever reason, he was escaping them!

After returning to France, Vincent went to Rome and continued his studies until 1609, when he was sent back to France on a mission to Henry IV. He served as chaplain to the colorful, sometimes scandalous daughter of Henry II and Catherine de Medici, the late-16th century Queen Consort of France and Navarre, Marguerite de Valois. For a while he was parish priest at Clichy, but from 1612 he began to serve as tutor to the children of Philip de Gondi, Count of Joigny and general of the galleys of France, of the illustrious Gondi family. He was also confessor and spiritual director to Madame de Gondi, and began giving missions for the peasants on her estate under her sponsorship. In 1617, Vincent de Paul founded the Ladies of Charity, lay women in the parishes, to help in the mission of serving the poor.

In 1622 Vincent was appointed chaplain to the galleys, and in this capacity he gave missions for the galley-slaves. In 1625 he founded the Congregation of the Mission, a society of missionaries, commonly known as the Vincentians, or Lazarists, because their chief house in Paris was the priory of St. Lazare. The Congregation consisted of priests and laymen, taking four simple vows of poverty, chastity, obedience, and stability, living a common life and devoting themselves to preach the Gospel to the poor and to reform the clergy.

Around 1625, Vincent de Paul met Louis de Marillac. Louise was a Parisian woman who'd been born out of wedlock, but was raised among French aristocrats. She married Antoine le Gras, secretary to Queen Marie de Medici, in 1617, and was married for nine years until Antoine died. She raised her son, Michel, and through all those years, experienced a call to a more dedicated life. Vincent, who had become her spiritual director, recognized her gifts and potential. In 1634, with the assistance of Louise de Marillac, he founded the Daughters of Charity, a congregation of active, unenclosed nuns who devoted themselves to serve the poor in the spirit of humility, simplicity and love. Their habit resembled a French peasant dress: blue-grey gown with wide sleeves and apron, and a distinguishing white cap and "wings".

Vincent de Paul was also deeply concerned with and fought against the rise and spread of the Jansenist heresy, propounded by Cornelius Jansen, bishop of Ypres, and quite prevalent at that time. It denied freedom of the will and man's ability to contribute to his own salvation. Jansenists believed that God had predestined some to eternal life and others to be lost forever.

On September 27, 1660, after much suffering, Vincent received the Last Sacraments, then died calmly in his chair at age 79 or 84, depending on his actual year of birth. He was buried in the Church of St. Lazare, Paris, beatified by Benedict XIII in 1729, and canonized a saint by Clement XII in 1737.

In 1809 Mother Elizabeth Ann Seton founded a community of Sisters in America based on the Rule of the Daughters of Charity of St. Vincent de Paul. From this root the Sisters of Charity have spread the spirit of the charism of St. Vincent and St. Louise to all parts of the U.S. and Canada.

In May 1833, Blessed Antoin Frédéric Ozanam, a layman of Jewish extraction and a French scholar, founded the Conference of Charity, later known as the Society of St. Vincent de Paul, in Paris, to serve the poor. He had worked with Sr. Rosalie Rendu, a Daughter of Charity, in the slums of Paris, and advocated the concepts of Christian social justice, the rights and dignity of every individual, and the need for equality of opportunity in education and employment.  Ozanam was beatified by Pope John Paul II at Notre Dame de Paris in 1997.

The legacy of Vincent de Paul and Louise de Marillac lives on in numerous institutes, both religious and lay, throughout the world. Many foundations have been influenced by the rule of Vincent which Louise helped develop.


Lord, you gave Vincent de Paul the courage and holiness of an apostle,
for the well-being of the poor and the formation of the clergy.
Help us to be zealous in continuing his work.
Grant this through our Lord Jesus Christ, your Son. Amen.
Posted by Harry Allagree at 1:19 PM