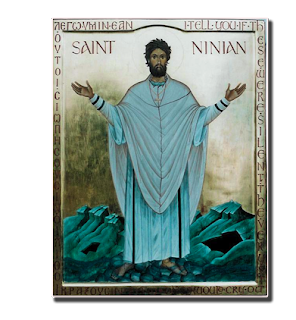 St. Ninian is first mentioned in the 8th century as being an early missionary among the Picts, in what is now Scotland. He's known as the Apostle to the Southern Picts, and there are numerous dedications to him in those parts of Scotland with a Pictish heritage, throughout the Scottish Lowlands, and in parts of Northern England of Northumbrian heritage. Ninian is also known as Ringan in Scotland, and as Trynnian in Northern England. St. Martin of Tours in Gaul was a mentor to Ninian.

A major shrine in honor of St. Ninian is at Whithorn in Galloway, where he is associated with the Candida Casa = white house, Latin), the first stone building in the land, the first church north of where Roman civilization had spread. Beyond this we know nothing about his teachings and little about his life.

There are over 70 churches or altars in Scotland dedicated to St. Ninian, and in many ancient Irish Ordo calendars the word mo = my is added before Ninian's name.
Posted by Harry Allagree at 2:30 PM