The Saint Who Was Done In By A Dancing Girl 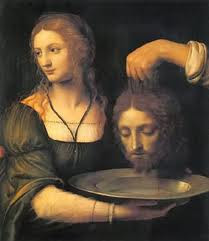 Our Order of Julian has transferred the commemoration of the Beheading of John the Baptizer from August 29 to today.

The accounts given in Mark 6:14-29 and Matthew 14:1-12 relate the poignant story in all its drama and tragedy, and I encourage you to revisit them.

St. John Chrysostom gives an apt summary to the life of John the Baptizer: “'John is the school of virtues, the guide of life, the model of holiness, the norm ofjustice, the mirror of virginity, the stamp of modesty, the exemplar of chastity, the road of repentance, the  pardon of sinners, the discipline of faith—John, greater than man, equal of angels, sum of the Law, sanction of the gospel, voice of the apostles, silence of the prophets, lantern of the world, forerunner of
the Judge, center of the whole Trinity! And so great a one as this is given to an incestuous woman, betrayed by an adulteress, awarded to a dancing girl!'

In the 21st century, a cave has been discovered in the Holy Land which some experts believe to have been the place where John baptized and his own home." (Fr. John Julian, OJN, in Stars In A Dark World)
Posted by Harry Allagree at 3:58 PM