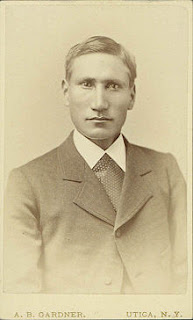 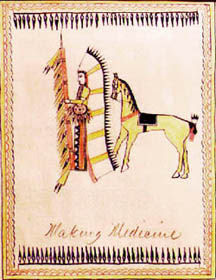 David Pendleton Oakerhater (ca. 1847-1931), whose Cheyenne name was O-kuh-ha-tuh, was also called "Making Medicine". He was a Cheyenne Indian warrior and spiritual leader, who became an artist and an Episcopal deacon. He was imprisoned in 1875, after the Indian Wars, at Fort Marion (now Castillo de San Marcos), Florida, He was ordained as a deacon in the Episcopal Church in 1881, and worked as a missionary to his own people in Oklahoma. In 1985, the Episcopal Church named him the first Native American Anglican saint.

Born in the 1840s in Indian Territory (later, the state of Oklahoma) to Sleeping Wolf (father), and Wah Nach (mother), Oh-kuh-hay-tuh was the second of three boys. His childhood name was Noksowist = "Bear Going Straight", and he was raised in the Cheyenne tradition. His older brother was Little Medicine, and his younger brother was Wolf Tongue.

Oh-kuh-hay-tuh is believed by some to have been the youngest man to complete the sun dance ritual, thus his Cheyenne name, Oh-kuh-hay-tuh = "Sun Dancer". He participated in his first war party at age 14 against the Otoe and Missouri tribes, and became a member of his tribe's "Bowstring Society", one of five military societies. He later participated in actions against U. S. federal and state militia forces. His first engagement with white settlers was at the Second Battle of Adobe Walls, in which 300 Native American warriors from various tribes, angered by settlers' poaching of buffalo, cattle grazing, and theft of horses, attacked a small trading village used by the poachers. The battle, lead by Comanche leader Isa-tai and Chief Quanah Parker, triggered U. S. government response in the form of the Red River War of 1874-75. Oh-kuh-hay-tuh may also have participated in the Battle of Washita River and the Sand Creek massacre.

In 1872 Oh-kuh-hay-tuh married Nomee = "Thunder Woman", who died in 1880. They had four children, all of whom died young. Oh-kuh-hay-tuh was also married a second time, to Nanessan = "Taking Off Dress". They had at least one child, and later divorced.

Baptized in 1878 at Grace Church, Syracuse, NY, he took the name David Pendleton Oakerhater, to honor his benefactress, Mrs. George Pendleton. He was confirmed October 20 of the same year at St. Paul's Church, Paris Hill, NY. Sponsored by the Diocese of Central New York, Oakerhater was trained in upstate New York, and in 1879 was sent to work among Cheyenne in Darlington, Oklahoma. His own mother, Wah Nach, was baptized there in 1882. Oakerhater served as a deacon for 36 years, though he continued to minister to the people even in retirement. He served longer than any other clergyman in Oklahoma, and had virtually founded the first Episcopal church in Oklahoma. "God's Warrior", as he is often called, died on August 31, 1931, and is buried in a small cemetery, 17 miles from Watonga, OK.
Posted by Harry Allagree at 4:19 PM