The Holy Trinity Lavra or Monastery of St. Sergius, in the town of Sergiyev Posad, about 90 km northeast of Moscow, is the most important Russian monastery and the spiritual center of the Russian Orthodox Church. The monastery is currently home to some 300 monks. It was founded in 1345 by a most highly venerated Russian saint, Sergius of Radonezh. 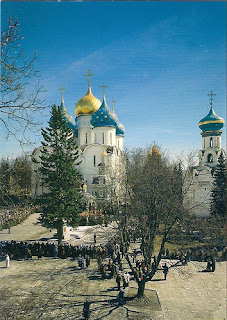 Venerable Sergius of Radonezh, or Sergii Radonezhsky, was a spiritual leader and monastic reformer of medieval Russia. Together with Venerable Seraphim of Sarov, he is one of the Russian Orthodox Church's most beloved saints.

The date of his birth is unclear: 1314, 1319, or 1322. He was born to a boyar family near Rostov Velikiy, where Varnitsy Monastery now stands. He was originally baptized with the name Bartholomew. His parents Kirill and Maria became impoverished and moved to Radonezh together with their three sons: Stefan, Bartholomew and Peter. Bartholomew was intelligent, but had great difficulty learning to read. It seems that a starets (spiritual elder) met him one day and gave him a piece of prosphora (holy bread) to eat, and from that day forward he was able to read. Devout Orthodox Christians interpret this incident as being an angelic visitation.

After his parents died, Bartholomew went to Khotkovo near Moscow, where his older brother, Stefan, was a monk. He and Stefan sought out a more secluded place, and withdrew deep into the forest at Makovets Hill, where they built a small cell and a wooden church dedicated to the Holy Trinity: humble beginnings to the history of the great Trinity-St. Sergius Lavra.

Eventually, Stefan moved to a monastery in Moscow. Bartholomew took monastic vows, assuming the religious name Sergius, and spent more than a year in the forest alone as a hermit. In time, other monks began coming to him and building their own cells. Subsequently, they asked him to become their hegumen (father superior), and he was ordained to the priesthood. All of the monks were required to live by their own labor, even as Sergius did. Over time, more and more monks arrived at this place. Nearby, a posad (settlement/small provincial town) developed and eventually grew into the town of Sergiev Posad.

When the news of Sergius's monastic movement reached Patriarch Philotheus of Constantinople, he sent to Sergius a monastic charter, and Sergius's disciples began to spread his teaching across central and northern Russia. They settled intentionally in the most impracticable places and founded numerous monasteries. St. Sergius was also connected with the foundation of two communities in Moscow: Andronikov and Simonov monasteries. The devoted disciples of Sergius founded c. 400 monasteries in all, greatly enhancing Sergius's reputation and influence in the Church. Nevertheless, when Metropolitan Alexius asked him to become his successor, Sergius declined, preferring to remain a simple monk.

Sergius was gentle by nature, mystically inclined, and insistent that his monks serve the needs of their neighbors. As an ascetic, St. Sergius didn't involve himself in the country's politics. However, he blessed Dmitry Donskoy, the Prince of Moscow, when he went to fight the Tartars in the decisive Battle of Kulikovo field, but only after he was satisfied that Dmitry had first pursued all peaceful means of resolving the conflict.

St. Sergius died on September 25, 1392. His incorrupt relics were found in 1422 and placed in the new Trinity Cathedral of the Lavra which he had founded, and he was glorified (canonized) in 1452. The Church commemorates him on September 25, the day of his death, and on July 5, the day his relics were uncovered. Well loved by many, Sergius has been referred to as the "Abbot of Russia" and "The Wonder Worker". The Roman Catholic Church recognizes Sergius as a saint, including him in the Roman Martyrology. The Episcopal Church also commemorates Sergius's feast day on September 25.
Anglican Christians are familiar with Sergius from the ecumenical Fellowship of St. Alban and St. Sergius, a society established to promote closer relations between the Anglican and Russian Churches.
Pilgrims continue to visit the shrine of St. Sergius at the monastery of Zagorsk, the residence of the Patriarch of Moscow.
Posted by Harry Allagree at 12:54 PM