The Busy Sybil of the Rhine: Hildegard of Bingen 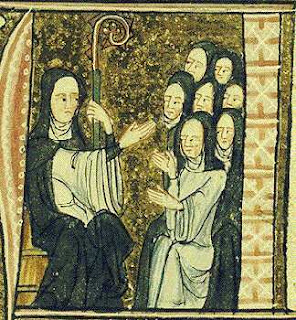 Born in 1098 at Bermersheim vor der Höhe, Hildegard lived a long, busy life before her death, September 17, 1179 at Bingen am Rhein, at age 81.
She's venerated in the Roman Catholic Church, the Anglican Communion, and by Lutherans, not to mention many people, especially women, with no religious affiliation. Though she wasn't formally canonized a saint, her name, nevertheless, appears in the Roman Martyrology.

Blessed Hildegard of Bingen, also known as the Sibyl of the Rhine, was a Christian mystic, German Benedictine abbess, visionary, and a person of great and varied learning, spanning many subject areas. Elected a magistra = teacher by her fellow nuns in 1136, she founded the monasteries of Rupertsberg (1150) and Eibingen (1165), and even had running water! Her writings inspired so great a figure as Bernard of Clairvaux. She corresponded with the Pope, and counselled many lay people and clergy. One of her works as a composer, the Ordo Virtutum, is an early example of liturgical drama. She wrote theological, botanical and medicinal texts, as well as letters, liturgical songs, poems, and the first surviving morality play, while supervising brilliant miniature illuminations: all this in addition to travelling extensively in Germany.

The most fascinating account I've ever read on what Hildegard of Bingen might have been like is the 1995 novel, entitled The Journal of Hildegard of Bingen, by Barbara Lachman. Even though it's purely fictional, it's based on the autobiographical, scientific and visionary writings of this medieval rebel nun and iconoclast of her age. Lachman has studied Hildegard's life and writings extensively, and her book, though a novel, has the semblance of authenticity, structured as it is around the liturgical feasts of the year 1152, a busy one in Abbess Hildegard's life, and the life of her nuns as they prepared for the feasts. Lachman makes Hildegard come alive in all her humanness, as well as in her vibrancy, creativity, and even in her weaknesses. But, then, what else are saints but terribly human, alive, vibrant, and weak creatures? We can all take heart! Another useful resource for coming to understand Hildegard of Bingen better is the wonderful CD collection of her music, called Visions. Both it and the book are available through Amazon.com.


Creator God, your whole creation, in all its varied and related parts,
shows forth your verdant and life-giving power: Grant that we your people,
illumined by the visions recorded by your servant Hildegard, may know,
and make known, the joy and jubilation of being part of this cycle of creation,
and may manifest your glory in all virtuous and godly living. Amen.
Posted by Harry Allagree at 10:22 PM