"The blood of Christians is seed..." 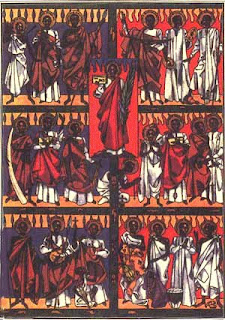 This is not a big deal, but I wish I had a dollar for every time I've seen/heard this quotation, attributed to Tertullian (c. 160-c.220 AD), short for Quintus Septimius Florens Tertullianus, in this form: "The blood of martyrs is the seed of the Church (or of the faith/of Christians)."  That's the textus receptus that was handed down to me all these years.  I discovered online today, however, that that's not exactly what Tertullian wrote originally in his Apologeticus (or Apologeticum) Adversus Gentes Pro Christianis, Chapter 50.
Here's the scoop, right from the horses' mouth:
For you Latin scholars:
"Nec quicquam tamen proficit exquisitior quaeque crudelitas vestra: illecebra est magis sectae.  Plures efficimur, quoties metimur  a vobis: semen est sanguis Christianorum." (Migne, PL)
If you prefer the Italian version: "Né tuttavia giova a nulla ogni vostra più raffinata crudeltà: è piuttosto un'attrattiva alla setta. Più numerosi diventiamo, ogni volta che da voi siamo mietuti: è semenza il sangue dei Cristiani."

A modern English translation from the Ante-Nicene Fathers library has this: "Nor does your cruelty, however exquisite, avail you; it is rather a temptation to us. The oftener we are mown down by you, the more in number we grow; the blood of Christians is seed."
For those who like "variations on a theme", the last phrase, in other English versions, is translated: "...the blood of the Christians is the seed of a new life."  Or, "the Christian blood you spill is like the seed you sow, it springs from the earth again, and fructifies the more."  It's easy to understand how the glorious example of the early martyrs could move a writer to use a bit of license in applying the phrase to "the Church" or "the faith". When it comes right down to it, I guess, the idea is more or less the same.  It's just that that's not what our good friend, Tertullian, actually wrote.  The allusion to martyrs' blood as "seed" was apparently common in early Christian writing; it wasn't unique to Tertullian.
However trivial that exercise might seem, there's no question in anyone's mind that there's a real link between the heroic witness to faith in Christ, particularly if it involves giving up one's life, and the subsequent growth of Christian faith by way of more people choosing a way of living modelled on that of Jesus the Christ.  Speaking of the saints whom we commemorate today, Lesser Feasts and Fasts notes: "The martyrs had left the indelible impression that Christianity was truly African, not simply a white man's religion.  Most of the missionary work was carried out by Africans rather than by white missionaries, and Christianity spread steadily.  Uganda is now the most Christian nation in Africa."  Uganda is also the site of the martyrdom of Archbishop Janani Luwum in our own time, in 1977.
The Martyrs of Namugongo, killed on June 3, 1886, are but thirty-two among a host of men, women, and children, in Uganda and elsewhere, who have courageously and generously offered their lives in every age of the Church, rather than submit to the demands of earthly powers, individuals or groups, to deny and reject their Christian faith.  I've often wondered what I would do if I were faced with that choice; perhaps the thought has occurred to most of us.  By God's grace, we would somehow find the strength and determination necessary in such a situation.  We need only recall the examples of so many among our own families, friends and acquaintances who quietly bear up under incredible difficulty and suffering every single day: physical, psychological, and spiritual.  We know and feel their strength which inspires and motivates us: like a seed.  We may never know exactly the fruit borne of that seed, though there are also always clearly hints of it here and there in our lives.

Thanks for clarifying the comment from Tertullian. The word church was not around when he made his comment, so I was PLEASED to see this more accurate translation. Blessings,