John: The Prophet of the Most High 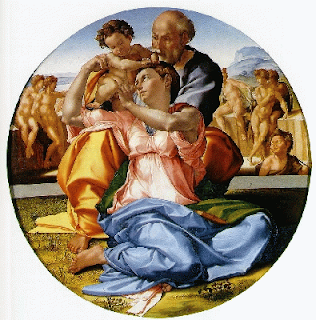 "The time came for Elizabeth to give birth, and she bore a son.
Her neighbors and relatives heard that the Lord had shown
his great mercy to her, and they rejoiced with her..."
(Luke 1:57-80)
God has visited God's people: and we are sons and daughters, prophets.
Both Elizabeth and her husband, Zechariah, his tongue loosed from not being able to speak, assure those gathered for their new son's circumcision that his name is John, despite some of their traditionalist relatives' attempts to impose his father's name. For this child and his family, it's definitely not business as usual. As his name Yehohanan implies, "God is gracious", "God has granted favor". The time of the Promised One has begun, with the birth of his forerunner.
All the signs were there: joy, rapidly-spreading news, astonishment, a time of fruitfulness, the prophetic word being heard again, God's presence responding to every human need. In the olden days there had been great activity and the influence of mighty prophets such as Isaiah, Ezekiel, Hosea, Jeremiah, etc. Then for a long time God was silent and the prophets were mute. Israel, indeed, was a "non-prophet" organization up until John's birth!
The hope of Israel was that the Word of God would make itself heard in the Messiah's time. Luke sees John fulfilling all the preceding prophetic vocations. John is the prophet of the final age, but his birth also inaugurates a new line of prophets: those who follow Jesus and develop into the Church of Pentecost.
A prophet, therefore, is not primarily one who foretells the future, but rather is one who stands in God's place and witnesses by his/her being to the life-giving presence of God's Word in Christ by preaching, witness, and obedience to the Word uttered by the Spirit of God: the powerful and creative Word.
The vision of the prophets in the the new age lies in examining present events and lucidly grasping the relationship of love which God has always willed to have with humankind. All share in the ability to prophesy, each according to the place he or she has in the Body of Christ and how each develops one's talent. You and I, by our baptism, are called to interpret the events of our times through the eyes of faith. Authentic faith is dynamic and growing, always helping the Church act as a light to the nations, even when it prefers not to do so.
There have been many men and women through the centuries who, in the spirit of John the Baptizer, have prophesied. Unfortunately, their "batting average" of being heard seems not to be so good. Nevertheless, we move ahead in faith, hope, and love. In the Eucharist, particularly, we live out what another great prophet, Pope John XXIII, once said: "Ever ready to love people, I stand by the law of the Gospel."
Posted by Harry Allagree at 6:41 PM