The Book of Common Prayer: Praying What We Believe 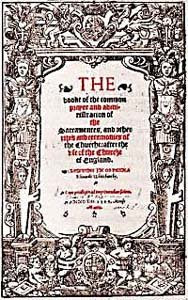 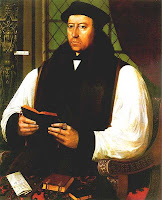 If any of you are "survivors" of the Prayer Book battles back in the late '70's and throughout the '80's, you might want to take a close look at the history of the original Book of Common Prayer, created by Thomas Cranmer, Archbishop of Canterbury (1533-1556).  The first Prayer Book was approved by Parliament in January, 1549 and introduced in June.  Whew boy!! Talk about "battles"!
The feast of Whitsunday (our Pentecost) fell on June 9 in 1549. All hell broke loose that day in many places across England. In Yorkshire, farmers attacked their priests with pitchforks. In Norfolk, spontaneous riots broke out in several places. In the west, in Devonshire, a full-scale rebellion arose. The city of Exeter was besieged by a large force, led by captains who included the Rev. Mr. Welsh, Vicar of St. Thomas Church. The Exeter siege lasted five weeks. Bridges were destroyed, roads torn up, pipes and conduits cut, and the condition of the city became grim as food supplies ran short. After many sallies and skirmishes Exeter was finally relieved by royal troops. The leaders of the rebellion were sent to London for trial and execution – except for the Vicar of St. Thomas. He remained at Exeter: wearing his vestments, he was hanged in chains on a gallows erected on the top of the tower of his own parish church and allowed to starve to death. His body was left hanging for nearly four years as a warning to rebels!
Nothing in our time has ever topped that!
What was it that stirred up such violent reaction? It was, quite simply, the formal introduction of the first Book of
Common Prayer in the Church of England. The rebels petitioned the king: “We wish to have all the General Councils and holy decrees of our forefathers observed, kept, and performed; and whosoever shall gainsay them, we hold them as heretics.” They went on to ask for the return of the Latin Mass (with only the priest receiving Communion) and Holy Communion for the laity only at Easter – and that under the form of Bread only. They wanted the restoration of ashes on Ash Wednesday and palms on Palm Sunday. They demanded that the Blessed Sacrament be reserved once again in a hanging pyx over the altar, and that Baptism be celebrated every day, not only on Sundays. They called for return of prayers for the souls in Purgatory and for suppression of the English Bible (as a source of heresy). The rebels particularly objected to the new liturgy being in English since they said that many of the Cornishmen among them could not understand English.
Proving that "every action has an opposite and equal reaction", the response was the Acts of Parliament, in which a clergyman’s refusal to adopt the new Prayer Book or any agitation or speaking against it made him a liable to six months in prison and the loss of his ecclesiastical income for a year. On a second offense, he was to be imprisoned for a year and deprived of all ecclesiastical offices and income permanently. For the third offense, he would be imprisoned for life. Any lay person openly attacking the new BCP would be subject to fines of $200 for the first offense, $500 for the second, and confiscation of all property for the third.  Hardball? Oh, yes!  Makes an Episcopalian glad for separation of Church and state!
Anyone who thinks the revision of 1979, after 51 years of the 1928 Prayer Book, was radical or "too soon", again should take a look at the history, not only of the Anglican Prayer Book, but of the American Prayer Book.  After the 1549 BCP in England, there followed revisions in 1552, 1553-58, 1559, 1604, 1645, and 1662.  Our American Prayer Book, adopted in 1789, underwent minor changes in 1792, 1799, 1801, 1804, 1832, 1835, 1838, 1841, 1868, and major changes in 1892, 1928, and 1979.  So, the next time someone objects to changing "the traditional Prayer Book", be sure to ask them "Which one?"
Cranmer, in my humble opinion, created a masterpiece in the Book of Common Prayer.  I was immediately enamored of it when I came into the Episcopal Church in 1977, and yes, that was the '28 Prayer Book.  I quickly adapted to the "new" 1979 model, mainly loving the fact that it didn't have the formal "thee's and thou's" language generally, although one still had the option of that in Rite I.  Cranmer wisely drew from a whole range of interesting sources: the Use of Sarum, the reformed Breviary of Francisco Cardinal Quiñones, some of the Lutheran liturgical experiments,  the Greek liturgies of SS. Basil and John Chyrsostom, and the Gallican liturgies.
Several principles guided Cranmer in devising a prayer book for all Anglicans:
1) Simplicity:  he eliminated many variable elements.  He shortened things.  He made it easily understandable.  There was economy of length in one book, and economy of cost.  It was a book accessible to all the people.
2) Based in Holy Scripture: if you're ever confronted with fundamentalist criticism that the Episcopal Church is "unbiblical", you might think of passing on a copy to your critic.  He or she may be blown away by how much of the Prayer Book is pure Scripture.  Cranmer's wasn't a narrow conformity to Scripture, however, such as was characteristic of the Calvinists.  He rather followed Luther's idea that all edifying forms should be kept except that which was definitely contrary to the Sacred Word. The parliamentary Act of Uniformity which finally brought the Book of Common Prayer into being set forth the principles on which it was established. The Book was said to be (1) “grounded upon the holy scriptures”; (2) “agreeable to the order of the primitive church”; (3) “effecting unity within the realm”; and (4) “edifying” to the people.
Fr. John Julian, OJN observes:  There seems to have been very little contemporary appreciation of the literary quality of Cranmer’s Prayer Book compositions – an adulation reserved to later centuries – but what was produced turned out to be the spiritual “mother” of the dozens of Prayer Books developed in the Anglican Communion throughout the world since then.

Whatever anyone may think of Cranmer and his theology, or concerning the intentions of those who authorized the Prayer Book, what was created on that Whitsunday in 1549 was to become the very soul of Anglicanism—in one
astounding Book was provided simple liturgical uniformity for all ceremonies and rites of the Church, a manual for
personal spirituality, and the only formal guardian of Anglican doctrine, in which, uniquely, doctrine is derived from
and protected by liturgy, giving a strong reinforcement to the ancient aphorism 'Lex orandi, lex credendi' – 'what is prayed is what is believed'."  (Stars In A Dark World)
Posted by Harry Allagree at 11:50 AM