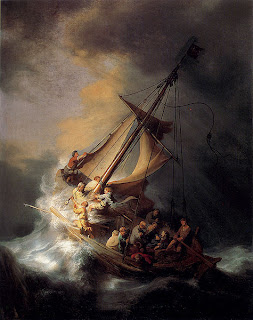 Capt. Eddie Rickenbacker
In the story which Mark records in today’s Gospel (Mark 4:35-41),
you can almost sense the excitement of the disciples, many of whom
were fishermen by trade, putting out from the shore on the Sea
of Galilee as they had so many times before. This time,
however, the boat carried a special passenger, Jesus himself.
They had just heard the Teacher speak, as Mark says “many
things in parables”, of good soil for seed, of steady growth, of a
mustard seed expanding into a large shrub, and comparing all
that to the “reign”, the “kingdom” which God calls all
humankind to share with God. They had experienced Jesus’
healing of those beyond cure. And now, here he was, in the
boat with them! They must have felt the special sense of
calmness brought by Jesus’ close presence.

That’s how we most often desire to experience Jesus: in a calm
daily routine, providing security and comfort. In the Church
especially, Jesus often becomes for us the benign celebrity: nice
to have around in our churches, at least on the special
occasions; at our potlucks as the generous “invokee”; at annual
graduation baccalaureates to add some solemnity. Jesus simply
adds to that special personal esteem and standing among others
as we drop his name.

As it was in that boat over 2000 years ago, we find it
comfortable and secure having Jesus around. In 1965 Pierre
Berton wrote a book, The Comfortable Pew, which dealt with
this kind of faith: a superficial, trivial, comfortable faith.
Fisherfolk in Jesus’ time would have been quite aware that the
Sea of Galilee had a notorious reputation for unpredictable,
sudden and violent storms. When the wind was trapped in the
surrounding hills or ravines, a tunnel effect was often created,
and wind came hurtling onto the lake with short-lived, but
vicious, power. Mark tells us that the winds began billowing
up; waves beat against the boat, so that it was already swamped.
Feeling the strength of the storm against their bodies and the boat,
an inner anxiety grips the disciples and rises along with the rising
waves. It’s no longer a calm and pleasant voyage across the lake.
Even pulling the sails in has little effect. As the storm gathers
momentum, so does their inner turmoil. If you’d like a visual
image of what this might have looked like, you can do no better
than view Rembrandt van Rijn’s powerful painting,
The Storm on the Sea of Galilee. [see above]

I suspect that most of us know what it feels like to lose control,
to be on the verge of panic, to realize that our resources aren’t
equal to the task. Life, like sea voyages, isn’t always on a calm
sea. Life, tough for us most of the time as it is, sometimes brings
us close to the breaking point. No one goes through life without
encountering the storms, the rising seas, the darkening skies.

What happens in those times? Like the disciples, you and I try
to draw upon all our human resources to make it on our own,
just as they trimmed the sails and lightened the load and
battened down the hatches, though to little avail.

When such turmoil comes to us, we can, for awhile, as they did,
kid ourselves into believing that we can rely on our own
strength and resources, that we’re equal to the task. We can
work and work to keep our heads above water, fighting against
the odds for survival. But there comes a point when we realize,
as they surely did, that many times life is simply beyond our
control, that we don’t have all the answers or the wherewithal
to cope. We can identify with that inner turmoil, that humbling
anxiety which they felt.

Such a situation confronted me this past New Year’s Eve at
Good Samaritan Hospital in W. Palm Beach, FL. My 34 year
old son took such a turn for the worse that I was suddenly faced
with the real possibility of having to make the decision to let
him go. I can well empathize with the disciples’ desperate
outburst in their situation: “Teacher, do you not care that we are
perishing?”

But, of course, God does care -- always -- far more than we can
ever imagine as human beings. In the midst of their deep
desperation, whom did the disciples finally remember? Jesus,
asleep on the boat’s cushion! Can you imagine how that must
have added to their stress level! In the midst of all their frenzied
activity to survive, there’s Jesus, sound asleep! It’s like an
office poster which reads: “If you can remain calm in the midst
of this mess, you really don’t understand the situation!” How
could he sleep with such a “mess” all around him?!

Experienced fishermen that they were, they didn’t misread the
storm’s potential danger. Its severity is clear in that they fully
expected to die. But in all of their attempts to save their skins,
the disciples had fairly overlooked Jesus. For all their
busyness, he could just as easily not have been there at all. The
Jesus they enjoyed when it was calm, secure, and easy went to
sleep within them before the winds began to blow and the
waves began to rise, and their lives became threatened, and
anxiety struck deep within. Yet all the while he was present, as
he always is: in the storm as well as in the stillness.

The great and highly decorated American World War II aviator,
Captain Eddie Rickenbacker, often related the story of how his
plane accidentally veered off-course, ran out of fuel, and
crashed into the Pacific Ocean. He and his six buddies drifted
in a raft for 24 days, mostly without food. Later, when visiting
wounded airmen in a military hospital, returning from the war
broken in body and spirit, he gave them this advice: “If you
haven’t had an experience of God in your life, you get yourself
one mighty quick, because with that you will have power over
all your problems.”

It may be nice and comfortable for us to have Jesus around in
the good times to heighten our celebrations and our joys. But it
can be tragic, even disastrous, if when trouble comes we fail to
draw upon his presence within and among us. Scripture scholar
Matthew Skinner observes that “To live in this world is to
encounter fearful situations.” For Mark, fear is the opposite of
faith, not unbelief. Such fear confirms our reluctance to truly
trust Who God is in relation to us. The disciples presume to
know the outcome of their situation, concluding, perhaps, that
Jesus could have no effect. Or, perhaps, their greatest unspoken
fear was of what actually followed.

Notice what happens when the disciples finally rouse Jesus: at
his command there is peace and stillness. The waters,
traditionally a symbol of chaos, disorder, and death for ancient
Israelites, subside and the boat and the disciples are back on an
even keel. Jesus, once awake, becomes like a thunderbolt in
their midst. He embodies within himself God’s awe-inspiring
and unlimited power. They and we finally realize that Mark’s
story is really a statement about who Jesus is. To encounter
Jesus is to encounter Godself: specifically the unpredictable
and open-ended God shown throughout Scripture in dealing
with God’s people. The disciples and we find ourselves face-
to-face with the experience of God’s power in our presence, a
power over which we have absolutely no control. And this
causes what Dietrich Bonhoeffer calls “the shiver of fear...that
the God of the world draws near...and lays claim to us.” When

Jesus withstands the threatening forces of our chaos, making
the unclean clean and restoring the unacceptable to wholeness,
he turns our cherished assumptions about order and security
and autonomy and fairness, for ourselves or others, topsy turvy.
“Why are you afraid?”, Jesus asks, “Have you no faith?” Mark
notes that “they were filled with great fear...” [instead of “awe”
in the NSRV; phobos = fear, in Greek].

St. Julian of Norwich, in her Revelations of Divine Love, has an
important chapter on her understanding of what fear is. She
believes that there are four kinds of fear:
1) “fear of fright which comes to [one] suddenly through
weakness.” For example, through physical injury or some
other bodily illness.
2) “fear of pain by which [one] is stirred and awakened from
the sleep of sin...” For Julian, sin has no tangible substance,
but is known only by the profound inner pain which we all
experience because of it. It’s as if, when we’re, as she says,
“hard asleep in sin,” we’re unable to experience the Holy
Spirit and to seek God’s comfort and mercy. This kind of
fear prompts us eventually toward sorrow before God.
3) “doubtful fear” which draws us towards despair because
we’re unable to acknowledge God as Love and as Goodness.
4) Finally, “reverent fear” which is the kind felt by the
disciples, by Eddie Rickenbacker, and hopefully by us when
we experience God in true faith. It evokes awe and reverence
as we encounter the true nature of God’s reality.

“Who then is this, that even the wind and the sea obey him?”
Jesus’ dramatic action is to teach us to trust his power over
whatever hurts us or threatens even to destroy us. The real
challenge is to “accept that we are accepted” (Paul Tillich),
loved and provided for even when waves beat the boat
around us and we’re being swamped. It is to know that Jesus
is trustworthy to give us an experience of the living God.

Julian puts it this way: “Love and fear are brothers;...rooted in
us by the Goodness of our Creator.” She says that to love is
an integral part of human nature because of grace, and that to
reverently fear is also in our nature because of grace. “It is part
of the Lordship and of the Fatherhood,” she says, “to be feared,
as it is part of the Goodness to be loved; and it is proper for us
who are [God’s] servants and [God’s] children to fear [God]
for [God’s] Lordship and [God’s] Fatherhood, as it is proper
for us to love [God] for [God’s] Goodness.” That is an
expression of Julian’s deep understanding of Who God is:
Father, Lord, and the Goodness which is the Holy Spirit.

This becomes even clearer when we read how Julian defines
faith: “Faith is nothing else but a right understanding (with
true belief and certain trust) of our being -- [namely] that we
are in God and God in us -- which we do not see. And this
virtue of faith...works great things in us, for Christ’s merciful
working is in us...and this working causes us to be...Christian
in living.”

William Ward (d. 1994) was author of Fountains of Faith and
of many inspirational thoughts. Let me close with one of them
as a wish and a prayer:
“God’s strength behind you,
[God’s] concern for you,
[God’s] love within you,
And [God’s] arms beneath you
Are more than sufficient
for the job ahead of you.”
Posted by Harry Allagree at 12:13 AM