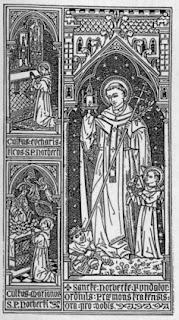 In cloistered hearts you did awake
The love of Him, Who for our sake
Dwells on our altars, closely veiled.
When Tanchelin’s profane touch assailed
That sacred Mystery, you did raise
Your trumpet voice. And with amaze
The Gallic nation stood to hear
Your matchless accents, rich and clear;
St. Bernard, too, proclaiming thee
A lute of heavenly melody.
Angels of peace, at your command
Fierce discord vanished from the land,
And hearts by you to Jesus given
Brought forth abundant fruit for Heaven.
When comes, at last, the harvest hour,
Oh! garner us, with saintly power.
"Premonstratensians".  Just the word seemed a bit exalted and somewhat scary to me the first time I read it in 1950. Knowing that I wanted to become a priest and also knowing that I did not want to be a diocesan priest, I sent enquiries to many Orders, among them the Premonstratensians, or Norbertines, at St. Norbert Abbey, West De Pere, WI.  Fr. N. J. McLaughlin, the Director of Vocations, wrote to me twice: one, a very encouraging letter, enclosing information on the Order; the second, equally nice, but with the bad news that one had to complete high school first.  For me that wasn't an option.  I also knew, from the information which Fr. McLaughlin sent, about the impressive white habits which the "White Canons" wore. He noted in his letter: "The candidate receives the White Habit on the 28th of August--The Feast of St. Augustine--after having completed an eight day retreat..."  Tempting, but that high school thing was the clincher. I wouldn't make a good Premonstratensian!
Norbert (c. 1080-1134) was the son of a German count who apparently enjoyed "sowing his oats" as a young courtier, at least until the day when he was literally knocked off his horse, à la St. Paul, by a bolt of lightning.  Soon after, he became a subdeacon in his hometown of Xanten in the Rhineland, and later reluctantly gave in to be ordained priest by the Archbishop of Cologne.  He became an itinerant preacher, often barefoot, travelling throughout France.  The Bishop of Laon asked him to reform the local Canons Regular at St. Martin's Church, but they resisted the changes.  Norbert gathered together his own little band of 13 followers and settled into a valley, Prémontré, about 75 miles northwest of Paris.  Being somewhat eclectic, he modified the Rule of St. Augustine for them and began parallel convents for women, adopting a Cistercian style of governance: central motherhouse, a superior general, and abbots of the houses subject to the Abbot General.  Within five years there were 800 White Canons! Pretty good for an ex-worldly profligate! In 1126 he was nominated by Emperor Lothair to be the bishop of Magdeburg.  As often happens with conscientious clerics, and Norbert was definitely one of those, the good bishop made lots of enemies because of the changes he brought about -- some trying to knife him, shoot arrows at him, etc. -- not a lot of church job security in those days!
Norbert was a friend 0f, and in fact worked with, the great St. Bernard of Clairvaux.  He was also later declared the Patron and Protector of Bohemia.
The moral:  try not to get hit by a lightning bolt: you never know where it may lead you!
Posted by Harry Allagree at 9:06 PM