"The Harp of the Holy Spirit" 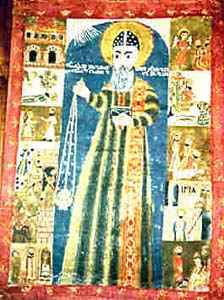 St. Ephrem the Syrian
c. 307 - 373
The Prayer of St. Ephrem the Syrian
O Lord and Master of my life, do not give me the spirit of laziness, meddling, self-importance and idle talk. Instead, grace me, Your servant, with the spirit of modesty, humility, patience, and love. Indeed, my Lord and King, grant that I may see my own faults, and not condemn my brothers and sisters, for You are blessed unto ages of ages. Amen.
[Translation by Fr James Silver, Drew University]
"...it was in that cave at Edessa that Ephrem composed most of his writings – his exegetical works, his polemics against heretics, his metrical homilies, and his hymns – over 400 of them! (One of which is included in Hymnal 1982 - No. 443) He learned that the heretics were using popular songs to teach their heresy, so he set orthodox words to the same tunes, and won over the people. Most of his hymns were written in cycles reflecting the liturgical year and were intended to be didactic and catechetical for the people. He wrote them in Aramaic (Syriac) – the very language Jesus had spoken, but they were translated into Greek and Latin even in his lifetime, and became so famous that Ephrem himself was known as 'The Harp of the Holy Spirit.'"  [Fr. John Julian, Stars In A Dark World]

1. Lord, you have had it written:
'Open your mouth and I will fill it'
See, Lord, your servant's mouth and his mind are open to you!
Fill it, O Lord, with your gift,
that I may sing your praise according to your will.

Refrain: Make me worthy to approach your Gift with awe!

3. Though your nature is one, its expressions are many;
they find three levels, high, middle, and lowly.
Make me worthy of the lowly part,
of picking up crumbs from the table of your wisdom.

4. Your highest expression is hidden with your Father,
your middle riches are the wonder of the Watchers [angels]
A tiny stream from your teaching, Lord,
for us below makes a flood of interpretations.

8. In your Bread is hidden a Spirit not to be eaten,
in your Wine dwells a Fire not to be drunk.
Spirit in your Bread, Fire in your Wine,
a wonder set apart, [yet] received by our lips!

18. Your Bread kills the Devourer [death] who had made us his bread,
your Cup destroys death which was swallowing us up.
We have eaten you, Lord, we have drunk you,
not to exhaust you, but to live by you.

22. See, Lord, my arms are filled with the crumbs from your table;
there is not room left in my lap.
As I kneel before you, hold back your Gift;
Keep it in your storehouse to give us again!

[From St. Ephrem the Syrian, Hymns on the Faith: "To Christ on the Incarnation, the Holy Spirit, and the Sacraments"; translation by R.  Murray, Eastern Churches Review 3 (1970), copied from T. M. Finn, "Early Christian Baptism and the Catechumenate: West and East Syria", The Liturgical Press, Collegeville, 1992]
"What a remarkable wonder, that one who has unfeigned love fulfils the whole of the Law. For the fulfilment of the Law is love, as the Apostle says . O unfathomable power of love! O infinite power of love! Nothing is more precious than love, neither in heaven nor on earth. That is why the Apostle Paul, having learned that nothing is worth as much as love, wrote and despatched to the ends of the inhabited world these words, ‘Brethren, owe no one anything, except to love one another, to lay down your lives for one another’. It is love that is the fulfilment of the Law. Love is unerring salvation. It dwelt from the beginning in Abel’s heart; it was Noah’s helmsman; it worked with the Patriarchs; rescued Moses; made David the dwelling of the Holy Spirit; made its tabernacle in the Prophets; gave strength to Job. And why should I not mention the greatest of all? It brought the Son of God from heaven down to us. Through love the One without flesh became flesh, the One without time entered time for us, the Son of God became son of man. Through love all things were ordered for our salvation; death was destroyed, Hell cast down, Adam recalled and Eve set free. Through love the curse was abolished, Paradise was opened, life was revealed, the Kingdom of heaven was promised. Love caught the fishers of fish in its net and made them fishers of men; competed alongside the Martyrs and gave them strength; turned the deserts into cities; filled mountains and caves with chanting; made mortals into angels; showed men and women how to tread the narrow and difficult way. But where should I stop pursuing what cannot be grasped? Who is capable of recounting the love’s achievements? I think even the Angels cannot recount them as they deserve. O blessed love, giver of all good things! O blessed love, who make those who long for you blessed! Blessed and truly thrice blessed the one who has acquired love from a pure heart and conscience.
[From St. Ephrem’s discourse On Love]

Posted by Harry Allagree at 2:28 PM