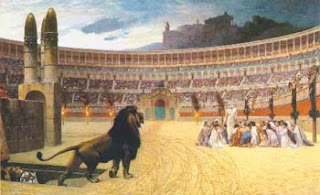 Often referred to as the "Martyrs of Lyons", Blandina and her companions were Christian martyrs of the late 2nd century.
The last and western-most stop on the trade route from Asia and the Orient, which extended through Greece, Italy and Gaul, was the city of Lyons, Lugdunum, in Latin.  Because of this influence from the East, the Christian congregations in Lyons were largely composed of people of Greek and Asian heritage, including their bishop, Pothinus, who had been taught the Christian faith by “those who had known the Apostles themselves.”
The Roman Emperor Marcus Aurelius had achieved a major victory in 174 against the armies of barbarian tribes along the Rhine-Danube frontier, and had credited at least part of his victory to the prayers of the Christians. Generally, the Church enjoyed a time of peace, although that depended largely on the particular place, and the level of superstitious fury of the particular magistrate.  Unfortunately, in Lyons the pagan governor levelled the ever popular myth-claim that, in their secret ceremonies, Christians killed babies, ate their flesh and drank their blood, and that they were involved in incestuous relationships.
The story of the suffering of the Martyrs of Lyons is told with great credibility by reliable eye-witnesses in a long letter, preserved in his history of the early Church by Eusebius. Survivors of the persecution later sent the letter to friends and fellow-Christians in Asia. Saint Irenaeus, who succeeded the martyred Pothinus as Bishop of Lyons, may have been the primary author of the letter.  The letter's account is an inspiration to us, their sisters and brothers in the faith:

“It is impossible to convey to you in words or in writing, the magnitude of the tribulation, the fury of the heathen against the saints, and all that the blessed martyrs endured...we were excluded from houses, from the baths, and from the market...”  They were subject to stoning, the plundering of their homes, blows, insults “and everything that an infuriated crowd loves to do to those it hates.”

The persecution then took on an official form.  Certain Christians from the community were led into the forum, publicly
interrogated, then sent to prison. A young Christian attorney of nobility, Vettius Epagathus, asked permission to defend the Christians against charges of impiety and treason. Unfortunately, when asked if he himself were a Christian, he courageously admitted that he was, and was forthwith thrown into the same prison with them. For about ten of the Christians, the horrific threats they endured were too much, and they abjured and denied their faith. Imagine the psychological and spiritual impact on their Christian brothers and sisters!  Nevertheless, most remained faithful, and daily the numbers of those arrested increased until all the major members of both congregations were in custody.

“...As the governor had given orders to let none of us escape, certain pagan servants of ours were also arrested. These slaves of ours, fearing that they might be tortured as well, accused their Christian masters of many
abominations including cannibalism of children and incest. When these things were made public, the populace was infuriated against us. The fury of the mob, the governor, and the soldiers fell most heavily upon Sanctus, a
deacon, Maturus, a newly-baptized Christian, on Attalus, a pillar of the Church, and on Blandina, a slave...When we were all in great fear, and her mistress was apprehensive lest Blandina not be able from bodily weakness to make her confession boldly, she was endued with so much power that even those who in relays tortured her from morning till evening grew faint and weary...” So torn and broken was her body that people found it amazing that she was still alive. Yet somehow she found the inner strength to repeat over and over the words:"...‘I am a Christian, and nothing vile is done among us.’"
The deacon Sanctus followed her example, repeating simply, “I am a Christian”. Once the usual methods of torture were exhausted, red-hot iron plates were applied to the tenderest parts of his body until he appeared to be only a mass of burned and swollen flesh. Three days later, when he revived, the treatment was repeated.
One of the lapsed, a timid and frail woman named Biblias, when tortured so that she would incriminate the other Christians, would only reply, “How can those eat children who are forbidden to eat the blood even of brute beasts?”, alluding to the congregation's practice of following the original Jerusalem Council’s admonition to Gentile Christians not to eat blood.
When ninety-year old Bishop Pothinus was dragged before the tribunal and asked, “Who is the God of the Christians?” he boldly answered, “When you are worthy, you shall know”, for which he was beaten, kicked, and stoned.  He died two days later in prison.

Maturus and Sanctus ran the gauntlet of lead-tipped whips, were bitten and dragged by wild beasts in the amphitheater, and then, with Attalus, were chained on an iron chair and roasted over a fire. Since they seemed to refuse to die, their torturers finally slit their throats.
Blandina was hung from a stake and wild beasts let loose upon her, but amazingly none of the animals would touch her as she prayed aloud. Her unrelenting, brave witness caused most of those who had apostatized to renew their confession of Christ, after which they, too, were tortured and killed along with the others.

On the last day of the tortures, Blandina and Ponticus, a boy of fifteen, both of whom had been forced to witness the sadistic massacre of all their friends, were brought back to the amphitheater. There they were scourged, exposed to the wild animals, and put in the iron chair, where young Ponticus died. At length Blandina was finally wrapped in a net and thrown to a wild bull. After she had been gored and tossed by the bull for a long time without dying, she was finally burned alive.

The bodies of the martyrs who died in prison were fed to the dogs and the corpses of the rest lay exposed under guard for six days, after which they were burned and the ashes cast into the Rhône River. Saint Gregory of Tours reports that the martyrs numbered forty-eight martyrs, from both Lyons and Vienne. Later remnants of their ashes were recovered and eventually enshrined under the altar in the Church of the Apostles in Lyons.

Eusebius ends his account of the martyrdoms thus: “They offered up to the Father a single wreath, but it was woven of diverse colors and flowers of all kinds. It was fitting that these noble [spiritual] athletes should endure a varied conflict, and win a great victory, that they might be entitled in the end to receive the crown supreme of life everlasting.”
[See Stars In a Dark World, by Fr. John Julian, OJN]
Posted by Harry Allagree at 3:20 PM