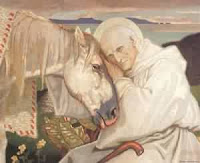 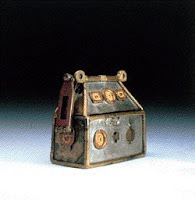 St. Columba/Columcille of Iona
"Delightful would it be to me
From a rock pinnacle to trace
Continually
The Ocean's face:
That I might watch the heaving waves
Of noble force
To God the Father chant their staves
Of the earth's course.
That I might mark its level strand,
To me no lone distress,
That I might hark the sea-bird's wondrous band—
Sweet source of happiness.
That I might hear the clamorous billows thunder
On the rude beach.
That by my blessed church side I might ponder
Their mighty speech.
Or watch surf-flying gulls the dark shoal follow
With joyous scream,
Or mighty ocean monsters spout and wallow,
Wonder supreme!
That I might well observe of ebb and flood
All cycles therein;
And that my mystic name might be for good
But "Cul-ri. Erin."
That gazing toward her on my heart might fall
A full contrition,
That I might then bewail my evils all,
Though hard the addition;
That I might bless the Lord who all things orders
For their great good.
The countless hierarchies through Heaven's bright borders—
Land, strand, and flood,
That I might search all books and from their chart
Find my soul's calm;
Now kneel before the Heaven of my heart,
Now chant a psalm;
Now meditate upon the King of Heaven,
Chief of the Holy Three;
Now ply my work by no compulsion driven.
What greater joy could be?
Now plucking dulse upon the rocky shore,
Now fishing eager on,
Now furnishing food unto the famished poor;
In hermitage anon:
The guidance of the King of Kings
Has been vouchsafed unto me;
If I keep watch beneath His wings,
No evil shall undo me."
Fr. John Julian describes Columba thus:  "A huge man – massively athletic in build – a voice which “could be heard for a mile” when he preached – guilty of breaking copyright law – personally responsible for starting two wars (one of which saw the death of 3,000 men) and yet whose Latin name means “dove” – absolutely the greatest and most famous saint of Scotland, but an Irishman by birth – born of an Irish royal family on his father’s side and a Scottish royal family on his mother’s, but raised by priests and spending his entire life as a monk – never more than a priest himself, he had authority over many bishops – possessed of a volatile Irish temper but driven by a ascetic and rigorous Celtic piety – and a member of the prestigious Irish Guild of Bards – that is our Saint Columba! The founder of over a hundred monasteries in Ireland and Scotland, he is also known by his Gaelic name 'Colmcille' (Colm-kíll-eh) or 'Colum of the Cells'."
Columba was a colorful character who left his definite imprint on the Celtic Christian world.  A man containing within his person many contradictory traits, he pursued a life of disciplined holiness, while missionizing the Scots and the Picts.  Beginning the Iona venture at a rather "mature" age, he earned the respect of kings, princes, bishops, ordinary people and his fellow-monks.
"...[I]n serene old age, he is depicted as a true lover of both man and beast. Four years before his death, he was stricken with a supposedly terminal illness, but recovered after a vision of angels told him he had four more years to live. On the day before his death, he was copying out the Psalter and had just written Psalm 34:10: “…those who seek the Lord lack nothing that is good” when he paused and said, “Here I must stop: let Baíthin do the rest.” (Baíthin was his cousin and successor; in fact, 10 of the first 13 abbots of Iona were blood-relatives to Columba.) Columba then went to the barns to thank the brothers who worked there. On the way back, he stopped to rest and sat on a stone by the roadway. The old white horse which for years had carried the milk pails from the cow pen to the monastery
approached him, laid his head on Columba’s breast, and, according to the legend, shed tears and moaned until Columba  blessed him and returned to the monastery. (A famous painting by the Scottish painter John Duncan shows the saint and the old white horse with his head on Columba’s breast.)  [see picture above]  That night, when the monks came to the church for Matins, they found Columba prostrate, helpless, and dying on the floor before the altar. As they lifted his body, he made a feeble effort to give them his blessing, and immediately breathed his last.
Sometime in the 840’s, Columba’s relics were transferred from Iona to the monastery of Dunkéld, contained in a jeweled and enameled casket known as the Monymusk Reliquary (still preserved in the Scottish Museum of Antiquities) [see picture above] and it is said that when the reliquary went with their army the Scots never lost a battle." [Fr. John Julian, Stars In A Dark World]
Posted by Harry Allagree at 11:46 AM