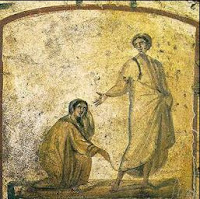 On the six Sundays after Trinity Sunday this year, we’re reflecting on the Gospel of Mark. If you look closely, you see how Mark depicts Jesus, the Teacher and Healer, coming on the scene with great force and command: curing illnesses and paralyzed people, casting out evil spirits, cleansing lepers, healing a demon-possessed man, calming a raging sea about to break up the disciples‘ boat. The key word for Mark in Greek is sozo = to save. Don’t ask me why, but translators of the Bible sometimes get all poetic and euphemistic, and don’t seem to give us a straightforward translation. For example, last week when Mark notes that “they were filled with great awe...” (NRSV) , the Greek text says “they were filled with great fear = phobos...” And fear -- not unbelief -- for Mark, is the opposite of faith.
Today’s Gospel reading (Mark 5:21-43) is an unusual story, in a way. After Jesus had come to the other side of the Sea of Galilee, he’d been approached by a synagogue leader, Jairus. Jairus would have been a well-respected V.I.P. in his community: the administrative head of the synagogue, lay president of the board of elders who managed the sacred place, and responsible for assigning worship duties and the proper carrying out of them. I’m guessing that Jairus might have been a man who didn’t find it easy to wait or to be patient. He tells Jesus that his little girl is so sick that it looks as though she’s going to die. Could he come quickly and lay hands on her, and not just make her well, but save her? Jesus didn’t hesitate, especially, I think, since it involved a child. “So he went with him”, Mark says.

Undoubtedly the crowd present there sensed a possible “Kodak moment”, something big about to happen, so they followed Jesus, pressing in on him. In the midst of this urgent mission, a nameless woman who’d heard about Jesus pressed in behind him, reached out and touched his cloak, muttering all the while to herself: “If I but touch his clothing, I’ll be saved (which, of course, is translated “be made well" in most versions).” “Immediately”, says Mark, “her hemorrhage stopped; and she felt in her body that she was healed of her plague.”

Now that might not seem like a big deal at first sight, but in that particular context it was a huge deal! The lady had been having hemorrhages, probably some sort of gynecological condition, for 12 years: as many years, coincidentally, as Jairus’ daughter had been alive. Mark is very detailed about her: “She had endured much under manyphysicians, and had spent all she had; and she was no better, but rather grew worse.” Commentator Henry Brinton observes: “...she was a victim of exploitation by quack doctors..., a perennial problem for the poor in antiquity...” Sound familiar?? Doesn’t appear that the healthcare system has improved much since then, does it?

But the woman had a much greater problem than the physical one: According to the Levitical code she was to be ostracized from the community and perpetually segregated because she was considered “unclean”. According to the Law she endangered others, without knowing it, to become unclean. And, horror of horrors, for her to touch one with an already established reputation as a holy man and wonder worker simply crossed the bounds of all acceptable behavior. For 12 years, until now, this woman was invisible, a nobody.

Keep in mind, now, that at this point Jesus was hurrying to get to Jairus’ house before his daughter died. But suddenly, “aware that power had gone forth from him”, Jesus stops. “Who touched my clothes?”, he asks. Imagine the rolling eyes of the disciples, probably thinking: “Jesus, you’ve got to be kidding!”, thoughts verbalized in Mark’s account slightly differently. But Jesus turns and scans the crowd, looking for one special person who’s come to be saved.

He doesn’t have to wait long. The woman knows she’s been “had”, and now what does she have to lose anyway? She’s already gotten what she came for. Bracing herself for a good tongue-lashing or worse, “in fear and trembling” according to Mark, she falls to her knees before Jesus and pours out her whole story. As she finishes, Jesus bends down and says quietly: “Daughter...your faith has saved you...” All the major Bible translations have “Daughter, your faith has made you well...”, except for the Roman Catholic New American Bible which accurately reflects the Greek text: “Daughter, your faith has saved you...” And calling her “Daughter” wasn’t some condescending form of address, but in essence a public announcement that this woman, up until now invisible in society and so abused by the system, is in reality a true daughter of Israel, God’s people, and a beneficiary of Godself. And further Jesus says to her: “Go in peace (shalom = fullness of blessing, full harmony with God, others, and herself), and be healed of your plague.” People must have been stunned when Jesus said that her faith had saved her: not his magic cloak, not her touching him or anything that she did, nothing in or on his body -- simply her faith, her willingness to accept and believe that Jesus is the channel of God’s power and presence and love. Jesus declares this up-to-now invisible woman a triply blessed daughter of God’s people: saved, at peace, and whole.

If the crowd had momentarily been distracted by Jesus’ magnanimous care for the woman, reality now sets back in as people from Jairus’ house arrive with the news no parent ever wants to hear: “Your daughter is dead.” Jairus must’ve been devastated. None of his power, none of his wealth mattered now. In his grief even Jairus couldn’t quite connect Jesus’ saving of the woman in the crowd with the situation he was in here and now. So Jesus reminds him: “Do not fear, only believe”, just as he’d reminded his disciples in thealmost-sinking boat, and the woman just a few minutes before: “Don’t be afraid, trust”, because fear, not unbelief, is the opposite of faith.

By the time Jesus reaches Jairus’ home, he sees that pandemonium has full reign. We have to bear in mind that this wasn’t unusual. In that Middle-Eastern culture there were very specific mourning customs, all stressing the final fact of life: namely, death. The weeping and wailing indicated that death had struck. People stayed near the body seeking a response from the dead. Beating the breast and tearing the hair was standard. Even the rending of garments followed a certain protocol: it was done just before the body was hid from sight; the skin over the heart, for parents, or over the right side, for all others, was exposed, but not beyond the navel; women rent an inner garment privately, then wore it back to front, before rending the outer garment; and the garment was worn for a month. Two flute players, with their wailing sounds, were hired, no matter how poor a family was. Travel was limited; mourners couldn’t anoint themselves or wear shoes. Their reading from the Hebrew Scriptures was limited to Job, Jeremiah, and Lamentations, rather than from the Law and Prophets which was considered joyful.

Jesus assures the crowd that the child isn’t dead, “but sleeping”. Mark poignantly observes: “And they laughed at him.” But Jesus ignores the signs of death and chaos, clears the house of mourners, and takes only the parents and Peter, James, and John with him to the girl’s room. Simply, purposefully, gently Jesus takes her hand in his and says in Aramaic, “Talitha koum...Little girl, get up!” Once again using the word “immediately”, Mark relates that the girl got up. As those present, most of all the grieving parents, are being “overcome with amazement”, Jesus gives them strict instructions not to give out details about what has happened. He then does something which, every time I read this, fills me with utter delight: he tells them to feed the kid! She probably got anything she wanted at that point, thanks to Jesus. How well Jesus knows our human nature, and how much young people especially are the recipients of Jesus’ utmost attention and love!

Biblical scholar Matthew Skinner notes that ‘[Jesus] exudes salvation in this passage.” The contrast between the stories show the wide spectrum of people and situations with which Jesus dealt. Then there is a question of the interruption which Jesus experiences. We learn from the story that Jesus’ priorities aren’t always what we would choose, that his power can always bring life from death in any situation. Contrary to the one-track, inflexible way many of us tend to do ministry, Jesus sees opportunity even in being interrupted. This little story is, according to Skinner, a sort of “theology of interruptions, to understand that God is neither bound to nor limited by human allocations of value and priority. God attends to all and is committed to the salvation of the whole person...”

As you and I seek to “serve Christ in all persons, loving [our] neighbor as [ourself]...”, we need to be aware that “Grace means that God has no task more urgent [for us] than to bend to assist those who seek help” (Skinner). And for that we, like Jairus and the woman in the crowd, need faith.

Someone has defined faith as “the daring of the soul to go farther than it can see.” Soren Kirkegaard called it a “leap of faith”. One of my favorite movies, Zorba the Greek, has a magnificent scene where the young writer, Basil, and Zorba are on the beach after a night out on the town. Basil asks Zorba to teach him to dance. Zorba replies: “You’re a great man and I love you. But there’s one thing you need to cut the bonds and set you free: a touch of madness.” Faith is the “touch of madness” each of us needs to set us completely free in Christ, to be saved, to find grace, peace, and healing.
Posted by Harry Allagree at 12:08 AM