My First Experience of Death 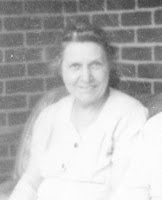 Today is the 60th anniversary of my grandmother's death. The images surrounding her death are still vivid in my mind. At 12 years old, it was really the first time I'd had to deal with the reality of death. Between the end of 1948 and early 1949 my grandmother had taken ill fairly suddenly, though she'd had physical problems a good part of her adult life. Still, at 59, she was relatively young. I remember her sitting in the living room (we lived with my grandparents) for long stretches of time. During the time right before she became bedridden, she became withdrawn and spoke almost nothing to anyone. Though she'd been a bit plump during the years I was growing up, she began to lose weight. Eventually, she was confined to bed, and a neighbor who was a nurse, Elizabeth Kathe, would come in to look over her each day and give her her medication. The evening of June 22 the whole family gathered at her bedside. I remember people kneeling by the bed, weeping, some sobbing. There were many unanswered questions rolling around in my mind: why was Grandma sick? what caused her illness? what's going to happen to her? At length, my mother sent me to get some sleep, and in the morning she came and sat quietly beside me. "Grandma died during the night", she said simply, then proceeded to share the details with me, calmly answering my questions. I remember that as one of the most wonderful things my mother ever did for me: explain as simply as was needed the "meaning" of death. I don't recall ever being uneasy or afraid about it. As Mom explained it, it made sense or as least as much sense as a holy death can mean to a human being. I knew that Grandma was at peace, that she was safe, and that one day long in the future I would see her again.
As my mother was going through her own dying process in 2003, I was able to repay her favor by being with her as she would reach out periodically into the air, as if trying to touch some near but unknown entity. I kept telling Mom that it was OK to let go, that Grandma and Grandpa, and Tom were all waiting for her on the other side, where she too would be at peace and safe. Now that I get closer on my own journey toward the time of separation from this life some time in the future, I do so, I think, with the calm, peace and grace which I learned in that first experience of death sixty years ago today.
I love my Grandmother and have always felt very close to her, though she was a woman of few words. But it was her love and attention that I cherished. I have only happy memories of her.
Clara Augusta Timmerman was born August 3, 1889, into a family of five other girls and 5 boys. Her mother, Emma, was a tailoress, and her father, Henry, was a cooper. I don't believe that my grandmother completed high school. I know that she worked in a cigar factory when she was young. Mom shared the story with me that one day as Grandma was working she felt something in the long dress she was wearing, and when she looked down saw that a mouse had gotten into her skirt! She married my Grandfather, Harry J. Fries, and bore eight children, six of whom survived childbirth. My aunt and godmother, Florence and my mother, Grace, were born ten years plus before the next four arrived in quick succession.
Grandma had learned to play the piano by ear, and when I was very young family members would pester her, on special occasions, to play for us, especially the Maple Leaf Rag. As she got older, she refused more and more because her hands were afflicted with arthritis. One of my happiest memories was of an incident several years before Grandma died. For some reason my cousins, Bobbie, Terry, and I were all together at Grandma's house one day. We must have been playing polka records which Grandma and Grandpa had, on the old Victrola. I recall Grandma enlisting our aid in moving some of the furniture back. She then started dancing with us and skipping around the room in a line, our hands joined, to the polka music. She had tied a little handkerchief around her neck to catch the perspiration. On that occasion we somehow conned Grandma into playing Maple Leaf Rag, and I remember the absolute joy and excitement of seeing her hands fairly fly across the keyboard. It was the first and only time I ever saw her play. Only many years later did I learn that the song she played was written by Scott Joplin, whose music is among my favorites.
The other treasured recollection I have of Grandma is that, from the time I was a little boy, she would have an endless supply of powdered donuts on hand (she called them "crullers"). Unfortunately, only a few people in the family seemed to eat them, and so every week there'd always be three or four left over -- and stale and hard as rock! But that was the way I liked them, sweet and crunchy and best dipped in a cold glass of milk! My last reminder to her each time I'd leave from visiting was: "Grandma, please be sure and save me some stale donuts." She was always ready with those delicacies when I'd ask her first thing on the next visit: "Grandma, do you have any stale donuts?"
I'm sure that much of her "grandparenting" rubbed off on me, as it did on my own mother in relation to my kids. I feel so blessed to have had the "sharing of the generations". What a grand reunion we'll all have in the future!
Posted by Harry Allagree at 9:42 PM