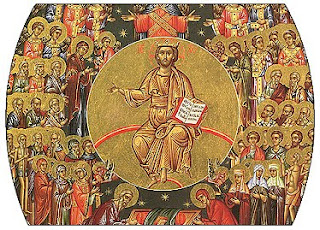 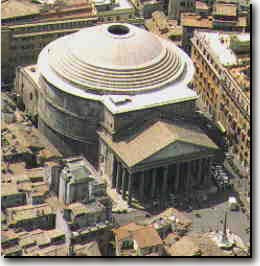 All Saints Day is one of the Church’s seven principal feasts. It was instituted to honor all the saints, known and unknown. Early Christians solemnized the anniversary of a martyr’s death for Christ at the place of martyrdom. In the 4th century neighboring dioceses began to interchange feasts, transfer saints’ relics, divide them, and to join in a common feast. Frequently, groups of martyrs suffered on the same day; this naturally led to a joint commemoration. During Diocletian’s persecution, between 299-310 C.E., the number of martyrs increased so much that a separate day could no longer be assigned to each martyr. The Church, however, feeling that each one should be venerated, appointed a common day for all. We find the first traces of this in the East, in Antioch, on the Sunday after Pentecost. The great 4th century deacon, poet, and teacher, Ephraim the Syrian, mentions a common day for martyrs, as does John Chrysostom in the 5th century. As early as 411 the Chaldean calendar notes a “Commemoration of confessors [of the faith]” on the Friday after Easter. At first, only the martyrs and St. John the Baptizer were honored by a special day. Gradually, other saints were added, and the number increased as a regular process of canonization of saints was established.

At the beginning of the 7th century, the Western Emperor Phocas gave the ancient Pantheon in Rome, a temple to all the pagan gods, to the Church. Marcus Agrippa began constructing the Pantheon in 27 B.C.E., and it was rebuilt by Hadrian between 117-125 C.E. Agrippa’s original rectangular temple became the porch for the newly devised dome structure, with its open oculum [eye] and a slightly concave floor below it with a drain at the center to catch the rain when necessary. The Pantheon sits at the front of the Piazza della Rotunda in Rome. [See picture above]

Pope Boniface IV consecrated the Pantheon as “Santa Maria della Rotunda”, dedicated to St. Mary and all the martyrs, in 609, and called for a yearly anniversary. In the 8th century Gregory III consecrated a chapel in honor of all the saints in St. Peter’s Basilica, and fixed the anniversary on November 1. In the 9th century Gregory IV extended the celebration of the feast to the entire Church.

Thomas Cranmer, author of the Book of Common Prayer, in 1549 retained in the calendar only those feasts of saints who are mentioned in the New Testament and the feast of All Saints. The festival was retained after the Reformation in the calendar of many Lutheran churches also.

The Church is holy not only because a few of her members are held up as “saints”, but because each and all of us who are the Church are called to be channels of God’s holiness and life and presence to one another. Psalm 24, used liturgically today, open with the observation: “The earth is God’s and all that is in it, the world and all who dwell therein.” That may trigger for us a recollection of the Genesis story where the Creator is depicted as pausing over each of the things/beings created, and observing: “It is good.” God, source of all being, goodness, beauty, wholeness, and therefore, holiness, puts a sort of stamp of approval, a stamp of holiness, on all of creation. Holiness or sanctity doesn’t come from a person’s own heroism or efforts, but from the fact that s/he is “gifted”, graced, with God’s own life and motivated by God to share God’s life and presence with others. Holiness, therefore, is an ideal, but a realizable ideal, meant to help build up the Church and, indeed, all humankind. It’s not just for a few select souls, but for ALL of us. We’re all of us sinners before God, but Jesus said, “I came not to call the righteous, but sinners.”

Through Baptism into Christ, holiness is a part of our spiritual DNA. Plunged into the very life of God, which is Love, we’re one-ed to God and to one another. Jesus is the unique pattern/model for humankind, living as the Holy One who loved God to the point of identification, and loved others as a servant to their pain, hunger and need. None of us has the luxury of saying, “But sainthood, holiness, isn’t for me -- it may be for the [canonized] saints, but surely not for me.” That is an evasion of one’s baptismal commitment. It’s never a question of “worthiness”, but of willingness: willingness to deliberately commit oneself in love to God, and willingness to commit oneself to the service of one’s sisters and brothers.

Saints aren’t just select heroes chosen by the Church, but all of us who’ve been reborn in Jesus and His Spirit through Baptism, and who take seriously the commitment we’ve made to follow Jesus. In that covenant we pledge to resist evil, and to return to the Lord when our weakness and selfishness overcome our resolve. More importantly, we pledge to proclaim the Good News of God in Christ by what we say and do each day. We pledge to seek and serve God in all people, to love them as we love ourselves: in the cause of justice and peace, and to respect each person’s dignity. Dom Hélder Camara, late Brazilian Archbishop, sums this up well:


... Let no one be scandalized if I frequent
Those who are considered unworthy
Or sinful. Who is not a sinner?
Let no one be alarmed if I am seen
With compromised and dangerous people,
On the left or the right,
Let no one bind me to a group.
My door, my heart, must be open
To everyone, absolutely everyone.
Canonized saints are helpful models for us, and we should rightly admire them, commemorate their words and deeds, and, where possible, imitate them in love of God and neighbor. But there are so many more people, past, present, and to come, unkown and unsung saints -- and we’ve all met them. In many places this morning the popular “saints” hymn, I Sing a Song of the Saints of God, was no doubt sung. It’s a veritable catalog of the kind of people we’ve all encountered in our lives and been inspired by to become more “holy” in our lives: doctors, queens, shepherdesses, soldiers, priests, martyrs, school students, seafarers and fisher folk, church workers, train operators, porters and passengers, shopkeepers, people who not only serve tea, but Starbucks barristas, restaurant waiters, cooks, and cleaning staff. The thing we all have in common, as the hymn notes, is that they’re “just folks like me” and you.

John, in Revelation 21, attempts to give hope to first century Christians who were being severely persecuted by imperial Rome. He reminds them (and us in our situation today) that God is present and intervening in the midst of their chaos, that Rome’s idolatrous, arrogant, oppressive and violent rule is collapsing, and that a new world is taking shape: “ a new heaven and a new earth”. “The sea is no more”: i.e., the chaos is ending. God has entered into a covenantal relationship with the community of God’s saints as intimate as a groom’s with a bride, marked by justice, abundance, joy and love. Each and all of God’s saints will have direct and full access to God. Sorrow, pain, and death will be no more.

Jesus, in John’s story of the raising of Lazarus [John 11:32-44], proclaims and confirms by a sign this newness of his Father’s life-giving power in the raising of Jesus’ friend from death to life. As God’s saints, we may ask ourselves: “Where is God raising Lazarus today?”, i.e., what events, relationships, and ideas are signs in our Church and in the world of this newness of God’s life-giving presence and hope? perhaps in our parish efforts?? perhaps in our community?? perhaps in the Diocese?? Where do we see the hopeful sign of God’s life-giving love and mercy?
To become holy means to become whole, integrated, communal, as human persons and as followers of Jesus. Though that is a lifetime project, a costly one at that, none of us can ever weasel out and say, “But sainthood isn’t for me.” Jesus says, “Come to me all you who labor...I will give you rest.” Jesus renews that promise to you and me, to us, each time we come forward to share His Body and Blood in the Eucharist, in this “communion of saints”.

The French writer Leon Bloy once wrote: “There is only one tragedy in life -- not to be numbered among the saints.” On this All Saints Feast, we thank God that we have been, in Paul’s words, “sanctified in Christ Jesus, called to be saints together with all those who in every place call on the name of our Lord Jesus Christ.”
Posted by Harry Allagree at 5:31 PM