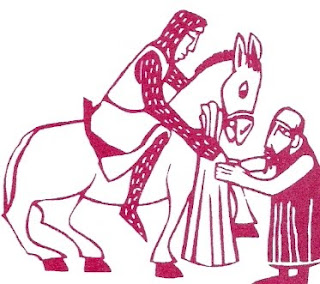 Loving God, you clothed your servant Martin the soldier with the
spirit of sacrifice, and set him as a bishop in your Church to be
a defender of the catholic faith: Give us grace to follow in his holy
steps, that at the last we may be found clothed with righteousness
in the dwellings of peace; through Jesus Christ our Lord. Amen.
Young Martin, son of a veteran who'd been an officer in the Roman army, was required to begin service in the military at age 15. He was stationed at Amiens, in Gaul, when the most important incident in his life occurred. He was riding towards the town one winter day and noticed a poor man near the gates. The man was barely covered, shivering in the cold, and begging for a handout. Martin noticed that no one passing by went out of their way to help the man.
The only things Martin had on him were his own clothes, so, drawing his sword, he cut his large woolen cloak in half, giving one half to the beggar and wrapping himself in the other half. Legend has it that the following night Martin had a dream of Jesus, surrounded by angels, and dressed in in the half of the cloak which Martin had given away. A voice bade him to look at it well, then asked if he recognized it. He then heard Jesus say to the angels: "Martin, as yet only a catechumen, has covered me with his cloak." Martin's friend and biographer, Sulpicius Severus, relates that as a consequence of the vision Martin "flew to be baptized."
Martin, the military veteran, lived happily as a monk until 371 when the people of Tours, needing a new bishop, demanded that Martin be consecrated. He refused, but not to be denied, the people arranged for him to go on a "sick call", and on the way captured him and brought him to the church to be consecrated! My, how the selection process for bishops has changed!
In his Stars in a Dark World, Fr. John Julian has an interesting historical note: "...over a thousand years after Martin's death a child was born in Germany on November 10, 1483, and on the next day when his parents took him to the baptismal font in the local parish church, realizing that it was the feast day of Martin of Tours, they named him after the holy Saint Martin. The child's family name was Luther!"
Posted by Harry Allagree at 10:45 AM