"The Most Beautiful Sacerdotal Figure" 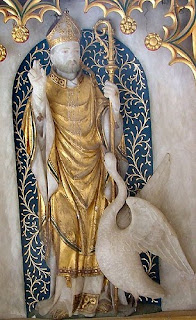 The title above is from a statement by John Ruskin (1819-1900), English art critic, author, poet, and artist. It would seem to ring true, given the homage paid to St. Hugh of Lincoln (1140-1200) at his funeral, attended by 3 archbishops, 14 bishops, 100 abbots, the Prince of South Wales, and the whole Jewish community from the Lincoln ghetto. Among those carrying his casket were John, king of England, and William, king of Scotland.
David L. Veal, in Saints Galore, describes Hugh of Lincoln as "thoroughly attractive and virile...an able sportsman, a lover of children and of animals, an excellent administrator, and a man whose humor and kindness charmed the English court..." Bear in mind that, prior to his becoming bishop of Lincoln, the second largest diocese in England at the time, Hugh of Avalon [in Burgundy, his birthplace] had lived with the Augustinian Canons for 11 years, becoming a professed Canon in 1155. At age 23 he entered the Carthusians at the Grand Chartreuse and lived the rigorous life of a monk for 16 years -- a total of 27 years in religious life!
Hugh died peacefully at 60 years old in London after a two-month illness, laid upon a cross of ashes which he had traced upon the floor, just as the choir began the Nunc Dimittis = "Now you set free [your servant]..."
Loving God, as your servant, Hugh, fed your sheep by his word,
and guided them by his example, so may we.
Posted by Harry Allagree at 11:51 AM