"Elizabeth of the Big Feet" 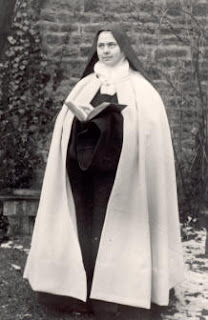 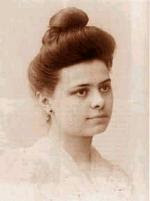 As a young lady, Elizabeth Catez described herself thus: "Without pride I think that I can say that my overall appearance is not displeasing. I am a brunette and, they say, rather tall for my age. I have sparkling black eyes and my thick eyebrows give me a severe look. The rest of my person is insignificant. My 'dainty' feet could win for me the nickname of Elizabeth of the Big Feet, like Queen Bertha! And there you have my physical portrait!..."
Her friends agreed that Elizabeth, or "Sabeth", as they called her, wasn't pretty in the accepted sense. She normally wore her thick, dark brown, waist-length hair caught back and hanging loose, or in a long braid. Her close friend, Françoise de Sourdon (whom she nicknamed "Framboise = Raspberry"), observed that her mouth was too large and her nose turned up a little too much. Another friend said that her dark piercing eyes were her most special feature, and that she displayed a radiant smile. Elizabeth, when she was somewhat older, noted: "I have put my hair up and it has made me look very grown-up."
From the age of seven Elizabeth displayed quite a talent for the piano. Her mother enrolled her in the Conservatory of Dijon. Her sister, Marguerite, whom Elizabeth called "Guite", joined her some years later at the Conservatory. It appears that their mother, widowed in 1887, saw the girls' musical training as preparation for careers as piano teachers. Elizabeth, however, who demonstrated her strong will on numerous occasions, knew from the time she was seven that she wanted to be a nun. Her mother was adamantly opposed, although she herself had considered the idea in her youth, and was clear with Elizabeth that she couldn't bear the thought of her entering religious life. Though Elizabeth, with great frustration and sadness, temporarily accepted her mother's decision, she never once lost sight of her true desire. Two weeks after her 21st birthday, in 1901, much to her mother's chagrin and even her aunts' accusations that Elizabeth was being "heartless", Elizabeth entered the enclosure door of the Carmel of Dijon.
Even before Elizabeth entered the Carmelites she'd begun to sense that during prayer she was being "dwelt in". This was around 1900, the year she was introduced to Père Gonzalve Valleé, O.P., prior of the Dominicans at Dijon. When she asked him what it meant, he gave her a rather theological explanation, using 1 Corinthians 3:16: "Do you not know that you are the temple of God and that the Holy Spirit dwells in you?" God's meaning, based on this human explanation, became progressively clearer to Elizabeth as her spiritual life deepened. After she entered the Carmel, she was bowled over by reading anew a passage in Paul's Letter to the Ephesians (1:11-12): "In Christ we have also obtained an inheritance, having been destined according to the purpose of him who accomplishes all things according to his counsel and will, so that we, who were the first to set our hope on Christ, might live for the praise of his glory..." This phrase struck a chord as summarizing all that she wished to be in relationship to the Holy Trinity in one God.
In the notes of one of her last retreats, Elizabeth spelled out what it meant to her to be God's "praise of glory":
- "'In Heaven' each soul is a praise of glory of the Father, the Word, and the Holy Spirit, for each soul is established in pure love..."
- "A praise of glory is a soul that lives in God, that loves Him with a pure and disinterested love, without seeking itself in the sweetness of this love..."
- "A praise of glory is a soul of silence that remains like a lyre under the mysterious touch of the Holy Spirit so that He may draw from it divine harmonies; it knows that suffering is a string that produces still more beautiful sounds; so it loves to see this string on its instrument that it may delightfully move the Heart of its God..."
- "A praise of glory is a soul that gazes on God in faith and simplicity; it is a reflector of all that He is...A soul which thus permits the divine Being to satisfy in itself His need to communicate 'all that He is and all that He has,' is in reality the praise of glory of all His gifts..."
- "Finally, a praise of glory is one who is always giving thanks. Each of her acts...are like an echo of the eternal Sanctus..."
Blessed Elizabeth of the Trinity (1880-1906) lived as a Carmelite less than five years after her entry into the Carmel. She lived silently, simply, suffering immensely, not just from the customary rigors of Carmelite life in those days, but additionally from Addison's disease, which eventually killed her at age 26. Addison's disease (also known as chronic adrenal insufficiency), named after Dr. Thomas Addison, the British physician who first described the condition in 1849, is a rare endocrine disorder in which the adrenal glands do not produce enough steroid hormones (glucocorticoids and often mineralocorticoids). It may develop in children, adults or some species of animals, and may occur as the result of many underlying causes. The condition is now generally diagnosed with blood tests, medical imaging and additional investigations, and treated: medical procedures not readily available to Carmelites in those days.
Elizabeth's last words were: "I am going to Light, to Life, to Love!"
Posted by Harry Allagree at 12:04 PM