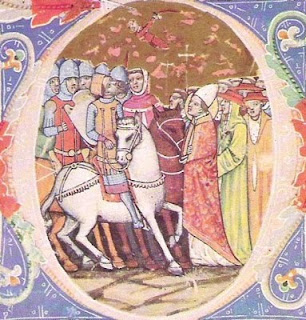 I can just imagine the headlines in the Acta Diurna in Rome the morning of September 29, 440: "Local Hometown Boy, Deacon Leo, Makes Good -- Elected Pope!" As Fr. John Julian, OJN notes in his collection of stories from the saints: "In Rome he was born; in Rome he ruled; in Rome he died." St. Leo (c. 400-c. 461), who would later be tagged "the Great", happened to be out of town at the time his predecessor, Sixtus III died, mediating a spat between two VIP imperial officials, Aëtius and Albinus, in Gaul. Obviously, Leo had been well liked as a deacon in Rome because the clergy quickly and enthusiastically chose him to be the next Bishop of Rome, even though it took them over a month to get him back so he could be consecrated!
A prolific writer (some 96 sermons and 143 letters which we still have), he was known for that, but particularly for his uncompromising stance against a variety of heresies of the day: Pelagianism, Manichaeism (in which St. Augustine, a friend of Leo's, had been involved), Priscillianism, a controversy with Pope Dioscorus of the Copts, Nestorianism, and various other "isms". When Emperor Theodosius butted in on ecclesiastical affairs, in cahoots with a renegade abbot who'd been excommunicated for heresy by the patriarch of Constantinople, called for a Council at Ephesus (later called "The Robbers' Synod) and exonerated Eutyches, Leo stepped in, letting Theodosius know he should mind his own business, and nullifying the entire proceedings. Two years later Theodosius died and Leo called his own ecumenical Council, one of the most important in Church history: the Council of Chalcedon, in 451.
Leo had prepared a long theological refutation of Eutyches' heretical ideas, called The Tome of Leo, for the "Council" in 449, but his delegates were prevented from reading it by Eutyches' cohorts: kind of a "Don't confuse us with the facts -- our minds are made up!" The famous Tome was a Latin text, a letter or statement of the faith of the Roman Church repeating, in close adherence to Augustine, the formulas of western Christology. It was a clear expression of the Catholic faith regarding the two-fold divine and human nature of Christ, as well as a clear rebuttal of the claims of Nestorianism that there are two Persons in Christ, divine and human and of the view of Eutyches, who said that Christ had only a divine nature, but no human nature. 600 of Leo's fellow-bishops not only concurred with him, but exclaimed that he'd been guided by the Holy Spirit in expressing what was the authentic teaching of the Church. Included in Leo's Tome was the acknowledgment also that Mary is the Theotokos, "God-bearer", "Mother of God". You can find all this documented in the Book of Common Prayer among "The Historical Documents of the Church" on page 864.
Leo the Great experienced many exciting and interesting times during his reign of 21 years, none more so, perhaps, than his meeting with Attila the Hun [see picture above]. When Attila and his Vandals, running amok in Italy in 452, threatened to sack Rome, Leo, along with two high civil functionaries, went to meet Attila. According to Prosper of Aquitaine, Attila was so impressed by him that he withdrew. Jordanes, who represents Leo's contemporary Priscus, thinks there were other reasons. Pragmatic concerns, such as the large sum of gold which accompanied Leo, or logistical and strategic concerns, may have been the true reason for Attila's mercy. Attila's army was already quite stretched and full with booty from plunder, and the Pope's plea for mercy may well have merely served as an honorable reason for not continuing on and sacking the city. Catholic hagiographical sources frequently cite as another reason that, as Leo approached him, Attila saw two ghostly figures visible only to Attila: one with keys and the other armed with a flaming sword -- the Apostles Peter and Paul -- who threatened him and his army with annihilation. Unfortunately Leo's intercession could not prevent the invasion of the city by the Vandals in 455 under Genseric, although he managed to prevent the Vandals from murdering the populace and burning the city. When the Vandals had finished their plundering rampage, Leo used his own resources to restore the basilicas and churches and to replace what had been stolen.
The significance of Leo's pontificate lies in the fact of his assertion of the universal jurisdiction of the Bishop of Rome, even then not accepted by everyone, particularly the church in Alexandria. Leo's assertion is commonly referred to as the doctrine of Petrine supremacy, which holds that the Church is built upon Peter, "the rock", as St. Matthew expresses it in his Gospel account [16:16-19]. Peter participates in everything which is Christ's; what the other Apostles have in common with Christ they have through Peter. What is true of Peter is true also of his successors. Every other bishop is charged with the care of his own special flock; the Bishop of Rome, the "Holy Father", has care of and responsibility for the whole Church. Other bishops are only his assistants in this great task. In Leo's eyes the decrees of the Council of Chalcedon acquired their validity from his confirmation.
Posted by Harry Allagree at 10:53 AM