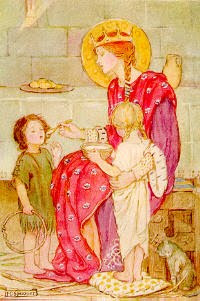 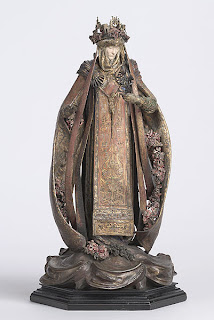 Though I knew little about St. Elizabeth of Hungary in 2002, I'm pretty sure I prayed to her. November 19 that year was the day I experienced the most major medical procedure of my life (so far!): a quadruple cardiac bypass. At that point, I'm sure I was enlisting the intercession of every saint I could think of! I know that I particularly asked the prayers of Gaspar del Bufalo, Thérèse of Lisieux, and Edith Stein, all long-time favorites of mine. At any rate, their prayers and those of many, many of my friends and acquaintances supported and comforted me during the 4 + hour surgery. I also had the surgeon of surgeons: Dr. Keith Korver, whom I often describe as being only a step down from God! Every two years he and his staff invite all of his cardiac bypass patients to gather for a reunion in Santa Rosa, the last one being this past summer, at which each of us wears a name tag bearing the number of our surgery. And to anticipate your next question, my number was 206; there are currently more than 1000+ live, healthy, happy patients with numbers!
Getting back to St. Elizabeth, I've learned a little more about her over the past seven years: enough to be extremely impressed and in awe of her. She was betrothed through an arranged marriage at four and was sent to the court of Thuringia to be raised by her future in-laws. They were not happy campers, and treated her accordingly. She lost her mother at six; was married at 14 and raised three children: a boy who died at 19 (ten years after she died); a girl who became a duchess; and her youngest girl who entered a convent. She was widowed at 20, after which her cold-hearted brother-in-law literally drove her and her three children out of the castle in the middle of winter. For the rest of her short life, she lived in poverty as a member of the Franciscan Third Order and continued her hands-on ministry to children, the sick, the needy, and the aged, which she had been doing, with her husband's blessing, during their time in the castle. Then she died, at age 24.
How did it come about, I wonder, that this young woman, hardly older than some of the college kids I see around town, became so utterly attuned to the core message of the Gospel: "...just as you did it to one of the least of these who are members of my family, you did it to me"? And not only became attuned, but acted on it consistently. She had a depth of spiritual maturity and faith in her 20's that I'm only still hoping and struggling for in my 7o's! Perhaps I shouldn't be so surprised. God works as God wishes in each of us, regardless of age. And I find myself thankful that God, through Dr. Korver's skills restored my heart so that I could continue learning how to have such spiritual wisdom.
Not long ago I had a vivid reminder of this. A young woman, an acquaintance, shared a personal reflection with me that just about blew me away. Come to think of it, maybe she's Elizabeth of Hungary reincarnated! She said: "...I never thought before about how brave it is to be open to loving even after being hurt..." (as Elizabeth certainly must have been). She goes on to talk about being present at a conversation wherein the people were talking about persons being strong enough to open themselves enough to have their heart broken. This hit her like a ton of bricks because, as she continues, "As a child (!!) I prayed for God to break my heart. As a child!...I would pray to God because I felt like I had so much love to give that it was spilling over...I was scared and trusting and full of faith as I wished for a broken heart...I still pray for a broken heart...Please break me open so I may hold more of Your love to share..." Like Elizabeth of Hungary, this young woman is in her 20's!
Posted by Harry Allagree at 3:47 PM