Commemoration of All the Departed 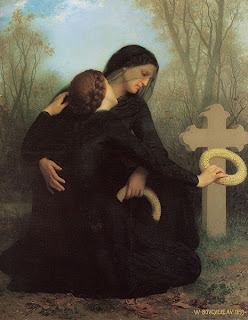 Historically, the Western tradition identifies the general custom of praying for the dead with the Jewish practice of prayer for the dead dating as far back as 2 Maccabees 12:42-46. The custom of setting apart a special day for intercession for "the faithful departed" is ancient.
The Church's official observance of such a commemoration, however, came later. "All Souls Day" originated as a monastic custom at the famous abbey of Cluny. In 998 Abbot Odilo ordered the observance on November 2 in all Cluniac monasteries. By the 13th century, the custom had become universal in the Western Church.
The Reformation set aside the observance in its liturgical changes. It was restored in the proposed 1928 Book of Common Prayer, largely in response to so many grieving families after World War I. Despite the fact that our modern society is extremely uncomfortable with death and the commemoration of the dead, Celebrating the Saints notes this: "In a society which has largely abandoned traditional patterns of mourning, the opportunity to express grief continues to have a valued place in the ministry of the Church." The Church's liturgy acknowledges the hard and painful reality of death in "the sure and certain hope of the resurrection to eternal life." As we follow Jesus on our pilgrim journey through life, we live with the mutual support of all our sisters and brothers. We're bound together in a communion of prayer, both living and departed, in a communion of the holy ones.
One of the notable elements in the medieval rite was the hymn, Dies Irae. During my seminary days we sang or read these rather graphic words many times. I confess that my own experience of them was, at least early on, sobering, if not somewhat anxiety-producing! Nevertheless, the words do get one's attention and may even have a salutary effect as we contemplate our life and final end. What follows is a rather literal translation of the Latin:
Day of wrath, that day
Will reduce the centuries to ashes
With David and the Sibyl acting as witness!
What tremor there will be,
when the judge will come,
investigating everything strictly!
The trumpet, dealing a wondrous sound
through the sepulchres of the regions,
will gather everyone before the throne.
Death and nature will marvel,
when the creature resurrects,
about to give answer to the Judge.
The written book will be taken out,
[the one] in which all is contained,
and from which the world shall be judged.
When, therefore, the Judge will be seated,
whatever is hidden will appear:
nothing will remain unpunished.
What am I then, miserable as I am, to say?
Which patron can I beseech,
when [even] the just may hardly be sure?
King of tremendous majesty,
you who freely save those in need of salvation,
save me, Source of holiness.
Remember, merciful Jesus,
that I am the cause of your way:
let me not be lost on that day.
From seeking me, you sat weary:
Suffering on the Cross, you redeemed me:
let not so much hardship be in vain.
Just judge of revenge,
grant the gift of remission
before the day of reckoning.
Being so guilty, I sigh:
my face grows red because of shame:
Spare, O God, the one who begs you.
You who absolved Mary [Magdalen],
and who heard the thief [on the cross],
you gave me hope also.
My prayers are not worthy:
but you, who are good, mercifully make it so,
that I am not burned up by eternal fire.
Make a place for me among the sheep,
and separate me from the goats,
standing on [your] right side.
The cursed have been rebuked,
and given to the acrid flames:
Call me with the blessed.
Begging and humble, I pray,
[my] heart is as crushed as ashes:
work the cure of my [final] end.
That tearful day,
on which from the ashes rises
the guilty man who is worthy to be judged!
Spare him, therefore, O God.
Merciful Lord Jesus,
grant them rest. Amen.
I'll leave you with these words of Austin Farrer, an early 20th century English priest, theologian and philosopher. He preached them in All Souls' College, Oxford: "'May they rest in peace, and may light perpetual shine upon them' -- those millions among whom our friends are lost, those millions for whom we cannot choose but pray; because prayer is a sharing in the love of the heart of God, and the love of God is earnestly set towards the salvation of his spiritual creatures, by, through and out of the fire that purifies them...[O]ur religion is not a simple relation of every soul separately to God, it is a mystical body in which we are all members one of another. And in this mystical body it does not suffice that every soul should be embraced by the thoughts of God; it has also to be that every soul should, in its thought, embrace the other souls. For apart from this mutual embracing, it would be unintelligible why we should pray at all, either for the living or for the departed. Such prayer is nothing but the exercising of our membership in the body of Christ. God is not content to care for us each severally, unless he can also, by his Holy Spirit in each one of us, care through and in us for all the rest. Every one of us is to be a focus of that divine life of which the attractive power holds the body together in one. So even in the darkness and blindness of our present existence, our thought ranges abroad and spreads out towards the confines of the mystical Christ, remembering the whole Church of Christ, as well militant on earth as triumphant in heaven, invoking angels, archangels and all the spiritual host..."
Posted by Harry Allagree at 1:46 PM