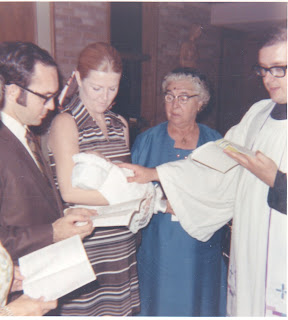 This is the only picture which I have of Father John "Jack" Petuskey (1938 - 2003), and unfortunately it's half cut off. Jack didn't change much as he grew older, except to look more distinguished. Imagine him with all grey hair, and you'd have an idea of how he looked when he died six years ago.
Jack and I met at St. Joseph's College in 1956. He arrived as a newcomer to the class below us. I happened to be available when he, his mother and his sister arrived at the Administration Building, and gave them the grand tour of the college campus, particularly of Xavier Hall which was the residence for the Precious Blood seminarians. For the next several years Jack remained in the seminary with us, and he frequently said through the years how much he and his family had appreciated my taking time with them that first day. I couldn't say that we were ever "close" friends during all that time, but we were friends and got to know one another to some degree. In some ways, we were like oil and water in terms of some of our personal characteristics. Jack was gregarious and very at ease socially; I was an introvert. Jack was unapologetically one of the staunchest Republicans I know; I was a rabid Democrat, and we would often have lively "discussions" on politics. Jack was Lithuanian by descent, and I'd frequently tease him by calling him my "rotten Lithuanian Republican". I'm sure he had a comeback for me, all in good fun, but I honestly can't recall it now.
After we got to the major seminary, St. Charles, it became more and more obvious to Jack that he wasn't called to the Precious Blood Community, though he was very bright and got along well generally with the other seminarians. Looking back, I think Jack had a creative streak in him and a vision of how priestly ministry, Christian education, etc. could be -- and, at the time, it was a bit different from what the seminary folks had in mind. His later career and the many people he served surely confirmed that Jack had made the right choice. He eventually was ordained as a diocesan priest, and spent almost all his priestly career in the Diocese of Oklahoma City. He taught at Bishop McGuinness High School there, and in 1970, "saved" my life by getting me a job there also after I'd been let go at Pflaum Publishing Co. in Dayton. My wife was seven months pregnant, and my daughter was born at the end of July, 1970, a month before I began teaching at McGuinness! Jack also baptized Nicole [see picture above] in September, 1970. He also saw to it that I had some pastoral outlets, having been laicized a year earlier, as Eucharistic Minister and adult education teacher at Christ the King Parish where Jack was the assistant.
What surprised me constantly, particularly after I had left the Community after ordination and gotten married, was Jack's persistent and faithful efforts to stay in touch. It really surprised me, and frankly, I wonder if I'd have done the same if the roles had been reversed. Many times, out of the blue, he'd call just to say "Hello" and fill me in on his latest project. That persistence had its effect, and over time I began to treasure his friendship more and more. He came every few years to California, staying up on the coast near Albion at the magnificent seaside home of one of his monsignor friends in Santa Rosa. He'd always call and arrange for me to come up, and over multiple glasses of scotch we'd compare "Catholic" and "Episcopal" notes and proceed to offer our solutions for all the problems of the Church! Jack was extremely ecumenical, and from the get-go was always respectful of my choice to transfer to the Episcopal Church. We were very simpatico in our theology and I always learned something from conversing with Jack.
Jack's family had been certainly comfortable, if not wealthy, and I'm sure Jack did okay as pastor of several large parishes in the Diocese. He was able to travel a lot all over the world and he would bring back lovely furniture, etc. from his travels. One of the last I remember was his trip to China.
Then around 2002, Jack was diagnosed with prostate cancer. He underwent all sorts of treatments for it, but was one of the unlucky folks who wasn't able to beat the disease. I'd kept in regular contact with him during his illness, and when he couldn't answer, often because of the effects of the illness, I'd leave a message. In the fall of 2003 I hadn't heard much from him and the couple of times I called, there was no answer. I finally called the parish secretary in early November, and sadly learned that Jack had died peacefully a couple of days before.
God's peace, dear friend, on this annivesary of your entering new life!
Posted by Harry Allagree at 1:27 PM