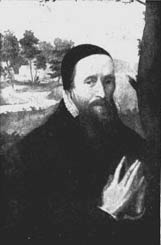 "Hooker is one of the inventors of that distinctive Anglican mood which I have called `contemplative pragmatism'—a mood that embraces a fair degree of clarity about the final goal of human beings and the theological conditions for getting there, but allows room for a good deal of reticence as to how this ought to work itself out, and skepticism as to the claims that we have found comprehensive formulations." (Rowan Williams, "Richard Hooker: Contemplative Pragmatism," Anglican Identities)

"[Archbishop William] Temple wrote to [later Roman Catholic Msgr.] Ronald Knox in 1913: `I don't believe in the ideal of a Church with sharply defined boundaries; its unity is like that of a ray of light—bright in the centre but ending none knows exactly where.' This, of course, creates an impression of vagueness and indecisiveness in thought and practice which has often been noted by critics who have argued that Anglicans thus prefer peace to truth. To this Temple responded: `We have learnt from a full experience that nearly always peace is the best way to truth.' Because Anglicans are called to put the peace of the church before their personal convictions, the latter are modified by the influence of others. Each side of a controversy learns to value what is true in the contentions of the others. This rather than partisanship is the way to fullness of truth. The vocation of Anglicanism is to hold together different sides of a truth which is so rich that no individual or group can appropriate it fully." (Owen Thomas, "William Temple," in William Wolf, ed., The Spirit of Anglicanism)
Richard Hooker (1554-1600) was an Anglican priest and, according to F. L. Cross: "one of the greatest theologians that the English Church has ever possessed." Hooker's emphases on nature, human experience, the traditions of wise forebears, human reason, and Scripture as sources for the guidance of Christians, as opposed to the blind, literal inerrancy of the Bible, considerably influenced the development of Anglicanism, and is the real hope of any resolution of the theological mess confronting the Anglican Communion and the Episcopal Church today. Along with Thomas Cranmer and Matthew Parker, Hooker eloquently expressed what is considered the authentic Anglican theological position.

Details of Hooker's life come chiefly from Izaak Walton’s biography of him. Born in the village of Heavitree in Exeter, Devon, sometime around Easter Sunday, 1553, to a family of very limited means, Hooker attended Exeter Grammar School until 1569. Hooker's uncle, John Hooker, was able to obtain for Richard the patronage of another Devon native, John Jewel, bishop of Salisbury. The bishop saw to it that Richard was accepted to Corpus Christi College, Oxford, where he became a fellow of the society in 1577. On August 14, 1579 Hooker was ordained a priest by Edwin Sandys, Bishop of London. Sandys appointed Hooker as the tutor of his son Edwin; Hooker also taught George Cranmer, the great nephew of Archbishop Thomas Cranmer.

Around 1581, Hooker, according to Izaak Walton, made the "fatal mistake" of marrying his landlady’s daughter, Joan Churchman. According to Walton: “There is a wheel within a wheel; a secret sacred wheel of Providence (most visible in marriages), guided by His hand that allows not the race to the swift nor bread to the wise, nor good wives to good men: and He that can bring good out of evil (for mortals are blind to this reason) only knows why this blessing was denied to patient Job, to meek Moses, and to our as meek and patient Mr Hooker.” The Churchman family belonged to the Puritan wing of the Church of England, and, in Walton's words, Joan Churchman "brought him neither beauty nor portion". Nevertheless, Richard Hooker apparently was a good husband who always treated his wife with respect. The couple had six children together, only two of whom survived beyond the age of 21. Joan died mysteriously the day after she was called to testify before the Archbishop of Lambeth regarding the whereabouts of Books 6-8 of her husband's famous work, Of the Laws of Ecclesiastical Polity.
Hooker became rector of St. Mary's Drayton Beauchamp in Buckinghamshire in 1584. The following year, Archbishop Sandys brought Hooker to the attention of Queen Elizabeth I, who appointed him Master (rector) of the Temple Church in London. Because of eventual public conflict with Walter Travers, a leading Puritan and Assistant at the Temple, Hooker, weary of the contentious atmosphere, left his position and served as Subdean of Salisbury Cathedral and Rector of St. Andrew's Boscomb in Wiltshire. Spurred by the very contentions that he'd endured, Hooker set to work on his greatest work, Of the Laws of Ecclesiastical Polity, Books 1-4 of which were published in 1594, and Book 5 in 1597. Hooker's friend, Dr. David Spencer, later recovered Hooker's original drafts of Books 6-8, completing and publishing them in 1600. In 1595, Queen Elizabeth, who was very fond of Hooker, appointed him as rector of the parish of St. Mary's at Bishopsbourne in Kent, where he died five years later.
The influential character of Hooker's writings, particularly Of the Laws of Ecclesiastical Polity, cannot be overestimated. Hooker's eight volume work is primarily a treatise on Church-state relations, but also deals comprehensively with issues of biblical interpretation, soteriology, ethics, and sanctification. Throughout the work, Hooker makes clear that theology involves prayer and is concerned with ultimate issues, and that theology is integral to the Church's social mission. Hooker argued for a middle way, a via media, between the positions of the Roman Catholics and the Puritans. He emphasized the importance of reason and tradition in interpreting Sacred Scripture, and how important it was to recognise that the Bible was written in a particular historical context, in response to specific situations: "Words must be taken according to the matter whereof they are uttered."

Of the Laws of Ecclesiastical Polity is a massive work, and its principal subject is the proper governance of the churches ("polity"). The Puritans, then known in England as the "Geneva Church," for John Calvin's influence on them, advocated the deemphasis of clergy and ecclesiasticism. Hooker attempted to work out which methods of organizing churches are best. His work is remembered not only for its stature as a monumental statement of Anglican thought, but for its influence in the development of theology, of political theory, and, being one of the first major works of theology written in English, of English prose.

Hooker worked from the Scholastic teaching of Thomas Aquinas, but adapted scholastic thought in a latitudinarian manner. He argued that church organization, like political organization, is one of the "things indifferent" to God. He wrote that minor doctrinal issues were not issues that damned or saved the soul, but rather frameworks surrounding the moral and religious life of the believer. He argued there were good monarchies and bad ones, good democracies and bad ones, and good church hierarchies and bad ones, what mattered was the piety of the people. At the same time, Hooker argued that authority was commanded by the Bible and by the traditions of the early church, but that authority was something that had to be based on piety and reason rather than automatic investiture. This was because authority had to be obeyed even if it were wrong and needed to be remedied by right reason and the Holy Spirit. Notably, Hooker affirmed that the power and propriety of bishops need not be in every case absolute.
The spirit of Richard Hooker and his theology is captured in Collect for his commemoration. May it guide the Anglican Communion and the Episcopal Church today, and indeed all ecumenical communities of faith, so challenged by petty partisanship:
O God of truth and peace, your raised up your servant,
Richard Hooker,in a day of bitter controversy
to defend with sound reasoning and great charity
the catholic and reformed religion:
Grant that we may maintain that middle way,
not as a compromise for the sake of peace,
but as a comprehension for the sake of truth...

Posted by Harry Allagree at 9:56 AM