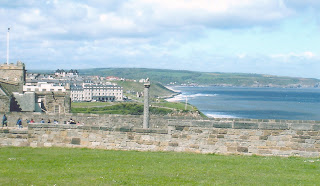 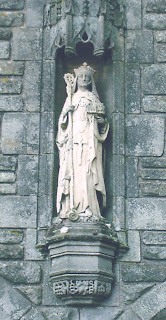 St. Hild[a] of Whitby (614-680)
The Venerable Bede of Jarrow records much of what we know about St. Hild(a) of Whitby: "All who knew her called her 'Mother', such were her wonderful godliness and grace." Of her passing he writes that she "saw death with joy." Now that I'm aware of Bede's comments, I realize why I have been attracted to St. Hilda for awhile. What greater ideal could be held out for any Christian's way of life! 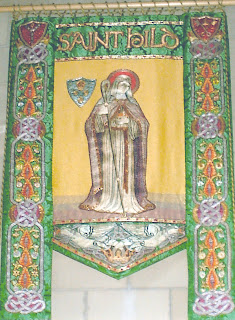 Banner of St. Hild in the Priory Chapel at Sneaton Castle
For all her impact on the Church and on Christianity, St. Hild has left us only a few fragments of her words and wisdom:
Trade with the gifts God has given you.
Bend your minds to holy learning that you
may escape the fretting moth of littleness of mind
that would wear out your souls.
Brace your wills to action that they may
not be the spoil of weak desires.
Train your hearts and lips to song which gives
courage to the soul.
Being buffeted by trials, learn to laugh.
Being reproved, give thanks.
Having failed, determine to succeed. 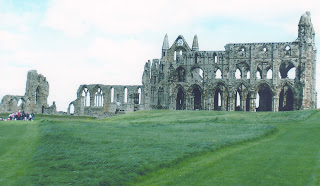 Whitby Abbey, looking north
The great missionary, Aidan of Lindisfarne, commissioned Hilda, a young woman of royal blood, to found a monastery on the north bank of the River Wear, where she lived for about a year, drawing only a few women to join her. Aidan then sent her to become abbess of Hartlepool, a monastery of men and women on the North Coast. A few years later she founded another double monastery at Streaneshalch (Whitby), based on St. Columbanus' Irish Rule. Hild's wise governance of her community caught the attention ordinary people and royalty who came to her for spiritual guidance. Bede tells us that she was demanding in this regard, requiring her devotees "to attend much to reading the Holy Scriptures and to exercise themselves freely in works of righteousness..." 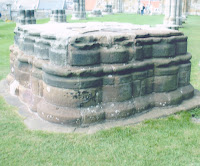 Remains of one of the 4 tower pillars

Site of the Old Monastery Cloister
St. Hilda Priory at Sneaton Castle, Whitby
Today the Sisters of the Order of the Holy Paraclete staff St. Hilda's Priory, carrying on a ministry of prayer and teaching. 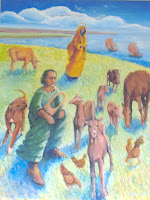 Mural of Hild's Anglo-Saxon shepherd, Caedmon
According to Bede, Cædmon was a lay brother who worked as a cowherd at the monastery. One evening, while the monks were feasting, singing, and playing a harp, Cædmon left early because he was embarrassed that he could sing no songs in the vernacular. While asleep, he had a dream in which quidem = someone approached him and asked him to sing about "the beginning of created things." After first refusing to sing, Cædmon subsequently produced a short poem praising God, Creator of heaven and earth. Upon awakening the next morning, Cædmon remembered everything he had sung and added additional lines to his poem. He told his foreman about his dream and gift, and was taken immediately to see the Abbess Hilda. Once Hilda and her counsellors had discussed Cædmon's vision with him and were satisfied that it was truly a gift from God, they gave him a new commission, this time for a poem based on “a passage of sacred history or doctrine”, as a sort of test. When Cædmon returned the next morning with the poem, he was directed to take monastic vows. St. Hilda ordered her scholars to teach Cædmon particularly Scripture. Bede says that after a passage had been explained to Caedmon, he would, after a night of thought, turn it into a sweet and joyful ballad in his native tongue. Cædmon was responsible for a large collection of splendid vernacular poetic texts on various Christian topics. Here is a transcription from an 8th century Northumbrian text of Caedmon's hymn after his vision:
Now [we] must honour
the Guardian of heaven,
the might of the Architect,
and his purpose,
the work of the Father of glory
— as he, the eternal Lord,
established
the beginning of wonders.
He, the holy Creator,
first created heaven as a roof
for the children of men.
Then the Guardian of mankind
the eternal Lord,
the Lord almighty
afterwards appointed
the middle earth,
the lands, for men.

In 663-664 St. Hilda was asked to host at Whitby Abbey, and to preside over the proceedings, a significant meeting of the Celtic and Roman factions in the Church in order to resolve two main issues: 1) determining the date of Easter; and 2) the style of the monastic tonsure (or "haircut", as we used to call it in seminary!). St. Colman defended the Celtic position, and St. Wilfrid championed the Roman cause. At the end of the discussions, King Oswy declared that the Roman customs would be observed in Northumbria. Colman and others still couldn't accept this, and so returned to Iona, effectively ending Celtic missionary work in north England. St. Hild, on the other hand, displayed graciousness and great humility in accepting the decision, though it was not her personal preference. Nevertheless, she remained at Whitby Abbey until her death.
I'll never forget my first sighting of Whitby Abbey from the tour bus in 2007, the beauty of Whitby Bay and of the monastery grounds, and the peaceful "vibes" of Mother Hild's presence. Even to this day there's "a North Country legend that on Trinity Sunday [which occurred only 25 days after we were at Whitby Abbey] the form of an ancient nun is seen to pass the windows of the Abbey Church at Whitby..." (Fr. John Julian, OJN, Stars In A Dark World)
The very form of Hilda fair,
Hovering over the sunny air.
Posted by Harry Allagree at 11:19 AM