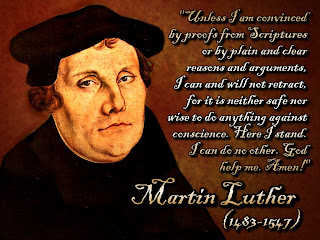 "...The number of books attributed to Martin Luther is quite impressive. However, some Luther scholars contend that many of the works were at least drafted by some of his good friends like Philipp Melanchthon. Luther’s books explain the settings of the epistles and show the conformity of the books of the Bible to each other. Of special note would be his writings about the Epistle to the Galatians in which Luther compares himself to the Apostle Paul in his defense of the Gospel. Luther also wrote about church administration and wrote much about the Christian home.

Luther's work contains a number of statements that modern readers would consider rather crude. For example, Luther was know to advise people that they should literally 'Tell the Devil he may kiss my ass.' It should be remembered that Luther received many communications from throughout Europe from people who could write anonymously, that is, without the specter of mass media making their communications known. No public figure today could write in the manner of the correspondences Luther received or in the way Luther responded to them. Luther was certainly a theologian of the middle-ages. He was an earthy man who enjoyed his beer, and was bold and often totally without tact in the blunt truth he vehemently preached. While this offended many, it endeared him all the more to others.

He was open with his frustrations and emotions, as well. Once, when asked if he truly loved God, Luther replied 'Love God? Sometimes I hate Him!' Luther was also frustrated by the works-emphasis of the book of James, calling it 'the Epistle of Straw', and questioning its canonicity. Also irritated with the complex symbolism of the Book of Revelation, he once said that it too, was not canon, and that it should be thrown into the river! He later retracted these statements, of course. Luther was a man who was easily misquoted or taken out of context. While a brilliant theologian, and a bold reformer, he would not have made a good politician. But then, he never aspired to any career in politics...

...Martin Luther escaped martyrdom, and died of natural causes. His last written words were, 'Know that no one can have indulged in the Holy Writers sufficiently, unless he has governed churches for a hundred years with the prophets, such as Elijah and Elisha, John the Baptist, Christ and the apostles... We are beggars: this is true.'" (From Greatsite.com)
Posted by Harry Allagree at 12:52 PM