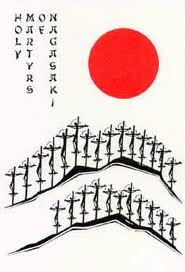 O God our Father, source of strength to all your saints, you
brought the holy martyrs of Japan through the suffering of
the cross to the joys of eternal life: Grant that we,
encouraged by their example, may hold fast the faith we
profess, even to death itself; through Jesus Christ our Lord,
who lives and reigns with you and the Holy Spirit, one God,
now and for ever. Amen.
The Jesuits, led by St. Francis Xavier, then the Franciscans introduced Christianity to Japan in the 16th century. It's estimated that, by the end of the century, there were some 300,000 baptized Christians there.
Humans, however, being as they are, so frequently have minds of their own. Though Jesus said, "Wherever two or three are gathered together, there I am in the midst of them," more often than not human beings find ways to drive him out of their midst through jealousy, competition, turf-protecting, politics, and just plain meanness of spirit. So it was in Japan following the heroic efforts and self-giving of the early Christian missionaries. The Spanish vied with the Portuguese, and both vied with the Japanese. For a half century the powerful Tokugawa shoguns at least tolerated Christianity, but finally outlawed it, inflicting violent persecution and suppression.
20 converts and 6 Franciscan friars were the first to die at their hands, crucified at Nagasaki on February 5, 1597. Within 35 years Christians in Japan had been driven underground. Remarkably, in the 1880's it was discovered that many laity and clergy had admirably preserved a semblance of the Christian faith through many generations.
The recent witness of the citizens of Cairo, using their God-given rights of assembly and free speech to denounce oppression and injustice inflicted by civil rulers, have inspired many of us. They've demonstrated, sometimes painfully, very much like the Martyrs of Nagasaki, that there are some principles worth fighting and suffering for, "even to death itself".  Would we who profess to be Christians in our own country have the same determination and faith? Who knows but that there could come a time?...