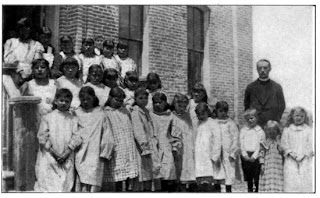 Fr. John Roberts and some of the students of the
Shoshone Mission School, c. 1906
No...not that "John Roberts", i.e., the Chief Justice of the Supreme Court! This John Roberts has just recently been included in the commemorations of Holy Women, Holy Men: Celebrating the Saints.

John Roberts was born in Dyserth, on the coast of North Wales, south of Prestatyn and north of St. Asaph, which I had the pleasure of visiting in 1993. Roberts received his education at Rhuthun Grammar School, then at St David’s College, Lampeter, then affiliated with Oxford University. He graduated with a Bachelor's degree in 1876, and was ordained a deacon in 1878 at Lichfield Cathedral by the Rt. Rev. George Augustus Selwyn.

Roberts served as curate for a short time at Dawley Magna in Shropshire, but soon left there for the Bahama Islands in 1878. He was ordained a priest by the Rt. Rev. Francis Cramer Roberts at Nassau, became chaplain of St Matthew's Cathedral, and also ministered to the leper colonies. He continued to grapple with his vocation and the dissatisfaction he felt ministering only to Christian people. It was also during this time that he met Laura Alice Brown, the Cathedral organist, who eventually became his wife.

In 1880 John Roberts set out for New York and applied for his first preference of priestly work: ministering to the Native Americans of the U.S. While in New York, he met Bishop John Franklin Spalding (1828-1902), missionary Bishop of Wyoming and Colorado, and requested being sent for “missionary work in your most difficult field”. At that time the Shoshone and Bannock Indian Agency on the Shoshone Indian Reservation, later known as the Wind River Indian Reservation, was within Bishop Spalding's missionary district.

Bishop Spalding first sent Roberts to Greeley, CO, then to Pueblo, to minister to the coal miners. He was also Rector of Trinity Church, Pueblo, and established Trinity Mission in South Pueblo in 1882, where he assisted working in the hospital during a small pox epidemic.

He left Pueblo in 1883 and travelled via Cheyenne to Green River, WY. Upon his arrival, he found Green River in the throws of a ferocious blizzard, thus preventing the stage coach from making the 150 mile journey from Green River to the Shoshone/Bannock Indian Agency. Nevertheless, the hearty pioneers of those days believed that the mail still had to be delivered. So they improvised by harnessing four horses to a large dry goods box, with hay spread on the floor, to which they added runners. As the driver was preparing to leave, John Roberts, standing there with his dog, let the man know that he also wanted to go as soon as possible, and thus hitched a ride. The journey took eight days, rather than 2 1/2! They arrived, exhausted, at Fort Washakie in 60 degree-below weather.

The two tribes of Native Americans on the reservation to whom Fr. Roberts ministered were very poor and lived primitively. The Shoshones were mountain Indians, and the Arapahoe, who lived about 20 miles from Ft. Washakie, were Plains Indians. Neither were friendly towards each other. Fr. Roberts gradually gained their confidence, learning both the Shoshone and Arapahoe languages and recording their vocabulary. Unlike many other missionaries, Roberts respected the people and encouraged them to retain their native culture, identity and languages, and, at the same time, helped them to adjust to the world developing around them. Apparently, Chief Washakie of the Shoshone tribe was something of a mercurial character and changed his religion several times.

In 1887 Chief Washakie gave Fr. Roberts 160 acres of land in order to build a mission school and house, some two miles from the fort. The U.S. government had already subsidized an industrial school nearby, but provided no furniture. Eventually the Native American boys were to be taught how to make furniture for the school. As was, and still is, common among many missionaries, John Roberts sent letters, inviting donations and sponsorship of his projects, to all the people he knew.

During his first year he wrote to his fiancée, Laura Brown, who was still in the Bahamas, asking her not to follow him out to Wyoming under any circumstances. The winters were severe and he felt that she couldn't survive the primitive living conditions, seeing that she was from a wealthy family and had been mostly used to servants and private tutors. Love, however,  proved to be stronger, for Laura responded that she was, indeed, coming and to expect her by the end of the year (1884). Only 19 years old at the time, Laura travelled 5000 miles via Liverpool and New York to Rawlins, WY, the nearest railway stop to the reservation. Fr. Roberts had to guesstimate the date of her arrival there. Leaving Ft. Washakie on December 24 by stage coach, he arrived the next afternoon, only a matter of hours after Laura's morning arrival. It'd been three years since they'd last seen each other, and at first Laura didn't recognize him under his large buffalo-hide coat.

John and Laura were married on the afternoon of Christmas Day, 1884, the first wedding at the new St Thomas Episcopal Church. Though many attending were strangers, the church was full and the congregation lavished them with good wishes before they set out the next day for the reservation. Eventually they had six children, five of whom survived: Eleanor, Gwen, Marion, Gladys, and Edward, all of whom became fluent in the native languages and were taught alongside the Native Americans.

Fr. Roberts was responsible for establishing a number of Wyoming churches: in Lander, Milford, Dubois, Thermopolis, Hudson, Riverton, Ethete, etc. Chief Washakie was very helpful in the first few years of Fr. Roberts' ministry. He died in 1900 at about the age of 100, and is buried in the Military Cemetery. It is said that he is the only Native American chief to have had a military funeral, having been highly regarded by the soldiers at the Fort. Fr. Roberts was the celebrant of his funeral.

In his second year of ministry at the Fort, Fr. Roberts was asked to call on a very old Native American woman, who turned out to be none other than Sacajawea, then about 100 years old also. She had been a translator and guide for the Lewis and Clark Expedition of 1803-1806, discovering the route from the eastern U.S. to the Pacific Ocean. Sacajawea died on April 9, 1884, and Fr. John Roberts had the honor of officiating at her burial. She was buried about 2 miles from the Fort, although some states dispute the claim. A large headstone was erected many years later and is often visited by tourists.

John Roberts was honored for his pioneering ministry and his untiring efforts in teaching among the Native Americans. In 1932 he was awarded a Doctorate of Law in Wyoming and a Doctorate of Divinity at Evanston, IL. In 1933 the flag of Wyoming was presented to the great choir of the National Cathedral in Washington in honor of both Fr. and Mrs. Roberts.

I, for one, am really happy to see folks like John Roberts, certainly unknown to me before now and, I suspect, to many others, included in our Church's commemorations. What a rich and exciting life he led, and what a marvelous and dedicated pioneer ministry he carried on, both for our country and for the Episcopal Church.
Posted by Harry Allagree at 1:50 PM